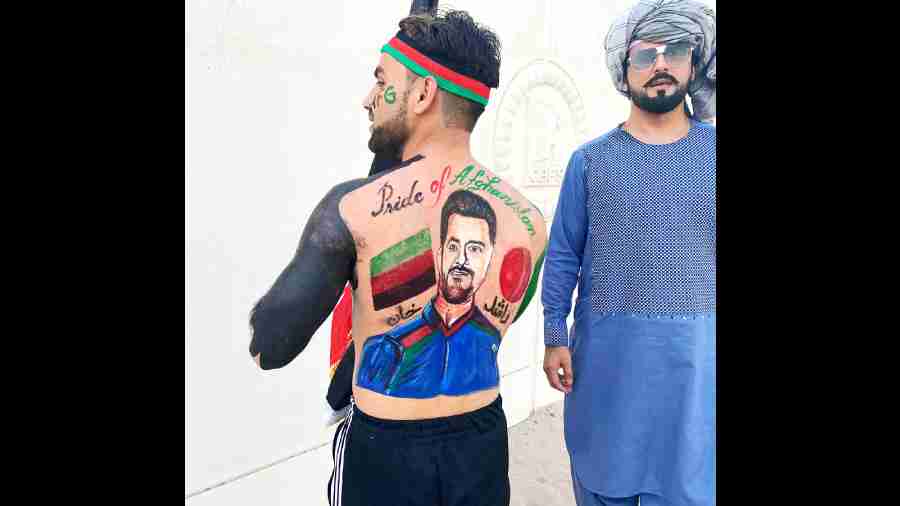 An Afghanistan fan with a painting of Rashid Khan on his back at Sharjah Cricket Stadium on Wednesday ahead of the match against Pakistan.
Picture by KR Nayar
K.R. Nayar   |   Sharjah   |   Published 09.09.22, 03:49 AM

Those who missed watching the Pakistan-Afghanistan clash at the stadium on Wednesday may have actually missed witnessing one of the best moments in cricket. Sharjah Cricket authorities feel that the two sixes from Naseem Shah — that won Pakistan the game and took them to Sunday’s final — was the best gift for the venue that set the record for hosting the maximum number of international matches last week.

Pakistan skipper Babar Azam compared the exciting finish to Javed Miandad’s last-ball six against India in 1986. On the walls in the pavilion hangs the framed photo of Miandad hitting that six. It’s signed by him and carries the message: “Dearest Abdul Rehman Bukhatir…best wishes to you for having done so much for cricket in the world.”

Bukhatir is considered to be the person who brought cricket to Sharjah.

Pakistan fans were nearly in tears when Fareed Ahmad dismissed Asif Ali in the penultimate over with the side still needing 12 runs from seven balls.

But when Naseem changed the course of the match, the Afghanistan fans were so shocked that they refused to leave their seats. They simply sat there with their heads in their hands. Some even covered themselves with their flags so their tears weren’t seen.

Naseem later walked straight to Wasim Akram, who was on the ground as commentator, where the pacer hugged the 19-year-old and congratulated him.

Afghanistan skipper Mohammad Nabi sportingly remarked at the post match conference: “It was Naseem Shah’s day.” Team colours Afghanistan supporters arrived at the Sharjah Cricket Stadium in trucks from the industrial areas while the Pakistan fans came in cars from Dubai and Ajman. A few fans stopped to buy flags from stores around the stadium while others queued up to get their faces painted in their team’s colours.

The Telegraph requested one of the fans for a photograph. He turned to reveal his back that had Rashid Khan’s face painted on, with the words “Pride of Afghanistan”.

Pakistan’s star cricket fan “Chacha” Abdul Jalil was in huge demand for selfies.  Also known as Chacha Cricket, the bearded gentleman in his 70s was guided through the crowd to his seat like a hero by the Pakistan and Afghanistan fans. Everyone wanted to sit close by since the TV cameras often focus on him. Jalil always has one request — cheer for your team but never use bad words against your opponents.