Out of sight Mohammed Shami on T20 World Cup radar 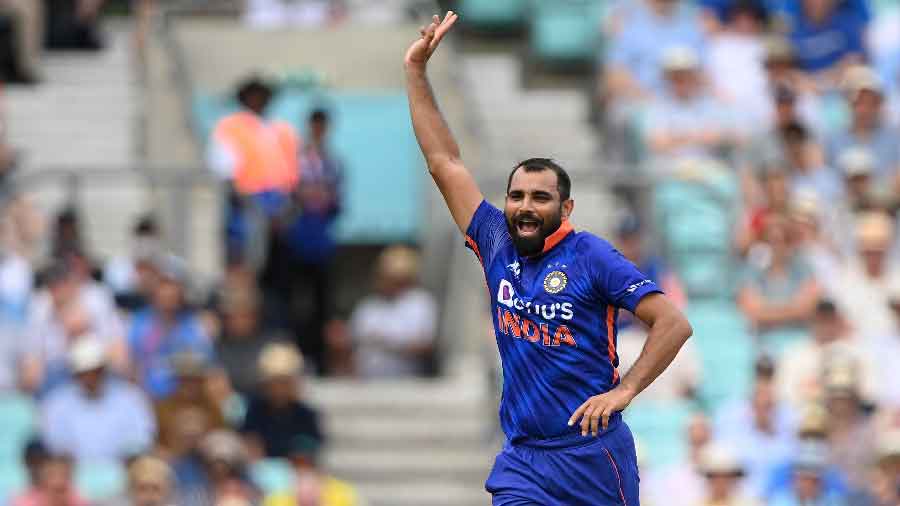 The national selectors may have omitted Mohammed Shami from the Asia Cup squad but the premier fast bowler remains in contention for the T20 World Cup in October-November. Shami, 31, hasn’t played a T20I since the last World Cup in the UAE but has been a regular with the ODI side.

Sources told The Telegraph that Shami is likely to be included during the home T20Is against Australia and South Africa next month and stands a fair chance of making the Australia-bound squad. “The team management is aware of how Shami could prove to be an asset in Australian conditions. Moreover, his experience of bowling on pitches where the ball seams and has quite a bit of bounce could be of great help. It will also be crucial to strike the right length on such surfaces,” a source told The Telegraph.

Both head coach Rahul Dravid and captain Rohit Sharma are known to give every player a fair run before making a judgement. Avesh Khan and Arshdeep Singh’s performance will be closely monitored in the UAE before deciding on their future. “The Asia Cup squad in no way reflects the 16 players who will go to the World Cup. Four spinners could prove to be a luxury in Australia. How the likes of Bhuvneshwar Kumar, Avesh and Arshdeep live up to the challenges will decide the line-up,” the source maintained.

“Remember the team management also wants to keep the reserve bench ready in case a player is ruled out with injury. You can’t take chances while playing in such a high profile tournament. The process has to be in place. You could see a completely different set of fast bowlers in Australia.”

Besides Jasprit Bumrah, who is expected to return from back injury, Deepak Chahar and Shami will be in the reckoning when the national selectors decide on the squad. There’s still no clarity whether Harshal Patel will recover from the side strain in time for the World Cup.

Shami has always been adept at providing breakthroughs with the new ball during the Powerplays but his failure to check the run-flow in the slog overs has come in for criticism.

He finished with an economy of 8.84 in the five matches during the last World Cup. During Gujarat Titans’ successful IPL campaign this year, Shami was their highest wicket-taker with 20 in 16 matches at an economy of eight an over. Shami also took 11 wickets in the first six overs, with an economy of just 6.62, the most by a bowler in IPL 2022 alongside Chennai Super Kings’ left-arm pacer Mukesh Choudhary.

But how the trio of Bhuvneshwar, Avesh and Arshdeep perform in the Asia Cup could decide their future. Laxman head coach National Cricket Academy (NCA) chief VVS Laxman will accompany the Zimbabwe-bound squad as head coach, as Dravid will enjoy a break.

The Asia Cup squad will reach Dubai on August 23. India will play three ODIs, part of the ICC Super League, in Harare. The other support staff, including Sairaj Bahutule and Hrishikesh Kanitkar, will also be from the NCA.

The BCCI announced on Thursday that a fit KL Rahul will be available for the series and will lead with Shikhar Dhawan acting as his deputy. Washington Sundar, however, is a doubtful starter having recently suffered a shoulder injury during Lancashire’s match against Worcestershire at Old Trafford. “@Sundarwashi5 has left the field after receiving treatment on his left shoulder following a heavy landing (sic),” the Lancashire CCC posted on Twitter.