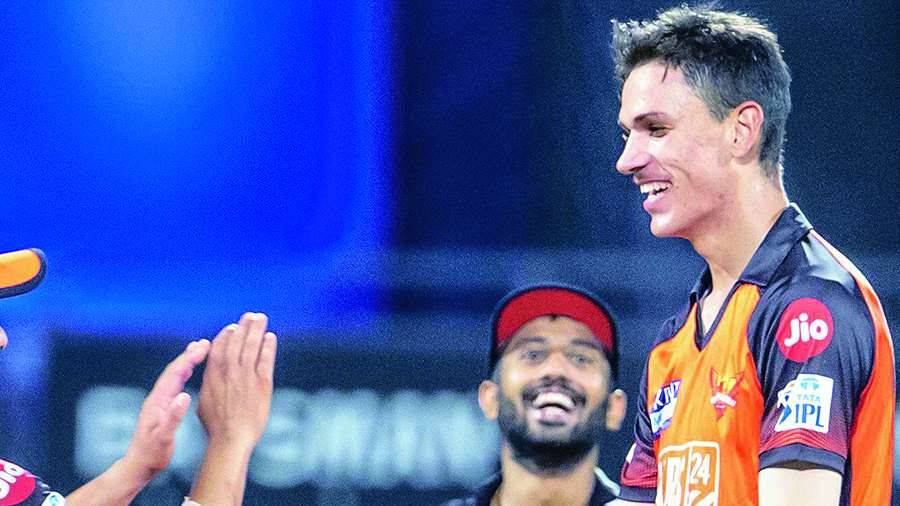 During India’s tour of South Africa in January 2018, a then 17-year-old had tested Virat Kohli and Co. at nets with his impressive pace and accuracy.

Almost four years later, the 2.06-metre tall Marco Jansen, making his international debut, troubled Kohli and other established batsmen in the Indian team, turning out to be a vital cog in a relatively-inexperienced South African line-up that recorded a remarkable come-from-behind Test series win at home.

Since then, the left-arm quick has continued to impress on the Proteas’ tour of New Zealand in February and currently in the ongoing IPL, where he has so far picked up six wickets from five matches at an economy rate of 7.15, donning the Sunrisers Hyderabad jersey.

What stands out is the quick progress Jansen has been able to make over the last four months.

Conditions in South Africa were also key to the 21-year-old finishing with 19 wickets in his debut series versus India. But Jansen has also proved himself in the ongoing IPL, where the wickets are hardly bowler-friendly.

An excellent line with a little bit of movement helped Jansen dismiss Royal Challengers Bangalore (RCB) captain Faf du Plessis, Kohli and Anuj Rawat in just the second over of the game at the Brabourne Stadium in Mumbai on Saturday.

“Marco had bowled well even on the flat pitches in use (in Bloemfontein) for the India A tour of South Africa last year. That has somewhat helped him make the adjustments in length and set him up for the biggest stage,” South Africa’s convener of selectors, Victor Mpitsang, had said.

“Marco has this natural ability to extract extra bounce because of his height. But at present, he has also been working on getting the ball to swing consistently,” Robin Peterson, Jansen’s coach at Warriors, told The Telegraph from Port Elizabeth.

According to Peterson, who first spotted Jansen during South Africa U-19’s tour of India three years ago, he concentrates on taking wickets even in the shortest format. “He’s a quick learner and he thinks about his game all the time.

“What’s also important is, he thinks wickets. And that’s probably the best way to succeed in T20 cricket,” Peterson, a former left-arm spinner who represented the Proteas in 15 Tests, 79 ODIs and 21 T20Is, emphasised.

Now that Jansen is working under the supervision of the Proteas legend Dale Steyn, who’s the Sunrisers’ bowling coach, he should become “an even better bowler” after the IPL, feels Peterson.

Jansen is certainly expected to be a part of the Proteas squad that tours India in June for the five T20Is and the T20 World Cup, to be held in Australia in October-November.

“Marco needs to be just a little more patient in Test cricket, while his real challenge will be playing India in India and Australia in Australia. But being strong mentally, he won’t be shying away from challenges,” Peterson stated.