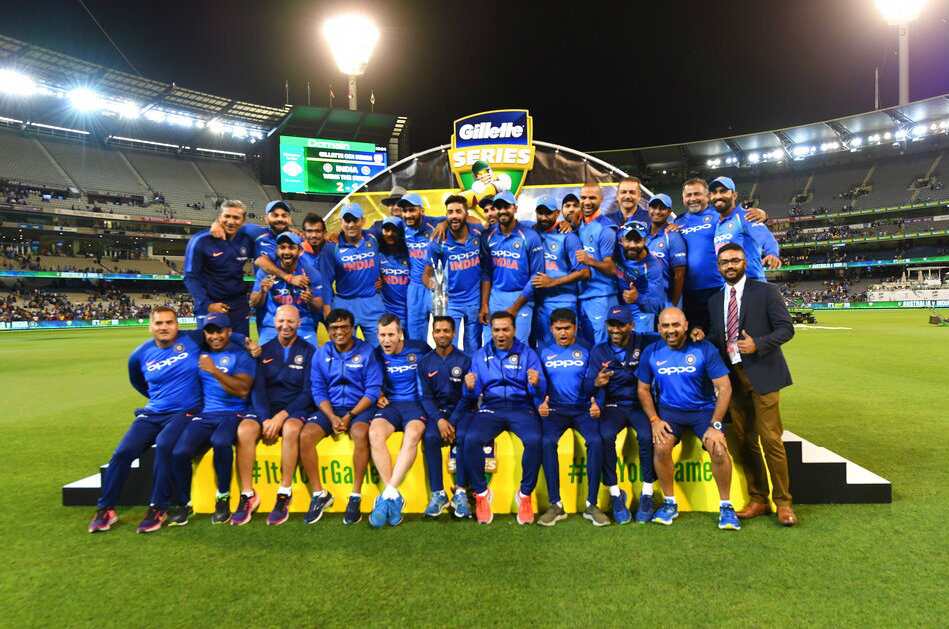 Mahendra Singh Dhoni rekindled his love affair with final flourishes, anchoring India to their maiden bilateral ODI series triumph in Australia for a perfect finish to a historic trip Down Under in Melbourne on Friday.

Virat Kohli's men became the first country to return from Australia without losing a single series having won the Test series 2-1 and drawn the T20 Internationals 1-1.

From a dasher, to a finisher to finally the anchor in the last leg of his career, Dhoni 3.0 was in full flow during India's successful chase of 231 in the third and final ODI on a sluggish Melbourne pitch after Yuzvendra Chahal set it up with a career-best 6 for 42.

'It wasn't an easy wicket to bat on, so it was important to take the game deep,' said India skipper Virat Kohli in the post-match presentation.

'Two set batsmen there who knew what to do and they got the job done. We've been here a long time, it's been an amazing tour. We drew the T20 series, won the Test series and now the ODIs. If you had given me these results before the tour, I would have gladly taken it,' he added.

Dhoni's unbeaten 87 off 114 balls was a testimony to his high-quality match awareness as the street-smart Kedar Jadhav (61 not out, 57 balls) donned the role of a finisher.

The former India skipper's role going into the business end of his illustrious career is that of an anchor, who takes the game deep.

He performed his role to perfection with a world-class exhibition of running between the wickets in what could well be his last match on the Australian soil.

Dhoni was lucky to be dropped on 0 and 74, but Australian bowling never had the sting to unsettle the Indian batsmen despite skipper Virat Kohli (46) being dismissed with more than 100 runs left.

Chasing 231, India got off to a slow start as well. Australia created some good pressure with the new ball, in particular Jhye Richardson (1-41) who tied down Rohit Sharma (9).

It worked, as the right-handed opener was caught at slip in the sixth over. Despite Kohli coming to the crease after that, India struggled in the first powerplay and only scored 26-1 in the first 10 overs.

Kohli added 44 runs with Shikhar Dhawan (23) for the second wicket, but it was a slower partnership than usual, thanks to some tight bowling and fielding by Australia in this passage of play.

The duo tried to cut loose, as Peter Handscomb dropped Kohli (on 10) at first slip off Billy Stanlake (0-49) in the 12th over. But things turned around for Australia when Dhawan lobbed a return catch to Marcus Stoinis in the 17th over.

While Kohli and Dhoni added 54 runs off 82 balls for the third wicket, it was an uncharacteristic partnership. There were two incidents of confusion between the wickets first in the 21st over when Kohli was stranded and was saved for a lack of a direct hit.

The Dhoni-Jadhav (121 runs) partnership then took some time in getting going. In the meantime, Dhoni reached his 70th ODI half-century off 74 balls. 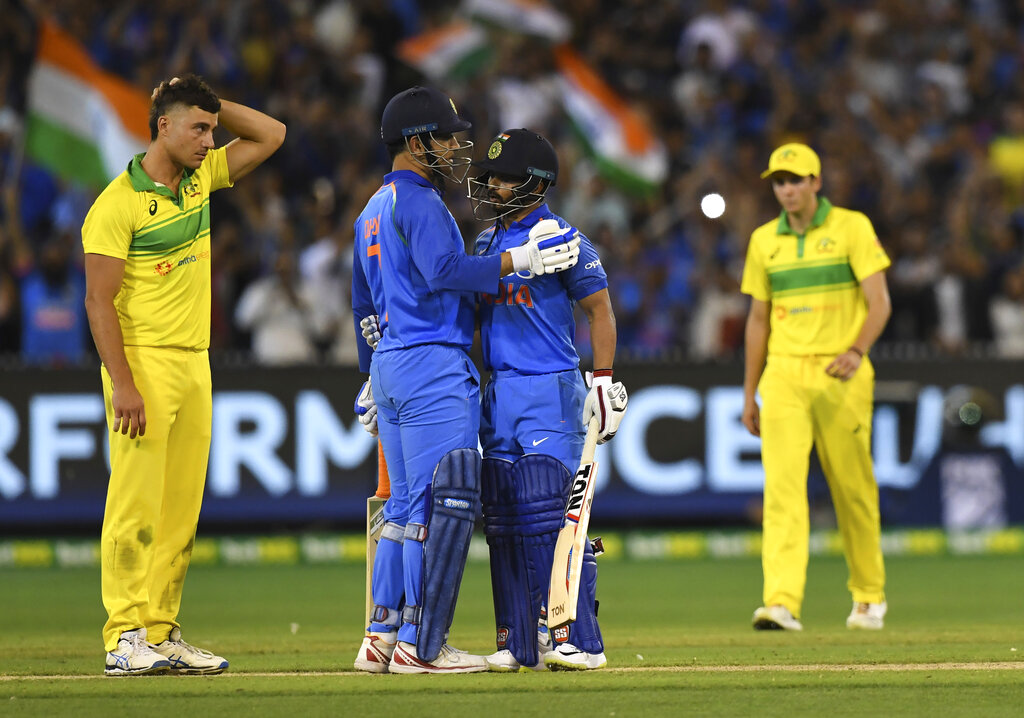 M.S. Dhoni and Kedar Jadhav congratulate each other on Friday.
AP

Jadhav then soothed Indian nerves as he scored his fourth ODI half-century off 52 balls, as the equation came down to 14 needed off 12. He struck two fours in the penultimate over off Peter Siddle (1-56) to close in on the match.

Chahal matched Ajit Agarkar's 6-42 in 2004 as he recorded the joint best-ever ODI figures on Australian soil. In doing so, he also improved on his previous best of 5-22 against South Africa at Centurion in January 2018.

Chahal varied the pace of his deliveries and also used the deception in his flight to make life miserable for Australian batsmen.

For Australia, Peter Handscomb (58) scored a fighting half-century and took them to a respectable total after they were reduced to 161-6 at one stage.

Play was delayed by 10 minutes because of rain and, after the first two balls in the Australian innings, there was a further 20-minute delay before the weather improved. The hosts faltered under cloudy skies though as Bhuvneshwar Kumar (2-28) and Mohammed Shami (2-47) bowled excellent opening spells.

India now believe that they can beat any team anywhere: Clarke