Advertisement
Home / Sports / Cricket / Lessons in tricks of the pace

Lessons in tricks of the pace

Against CSK, Umran Malik went for 48 off his four overs, was even more expensive (0/52) versus Delhi Capitals and then conceded 25 in two overs versus RCB 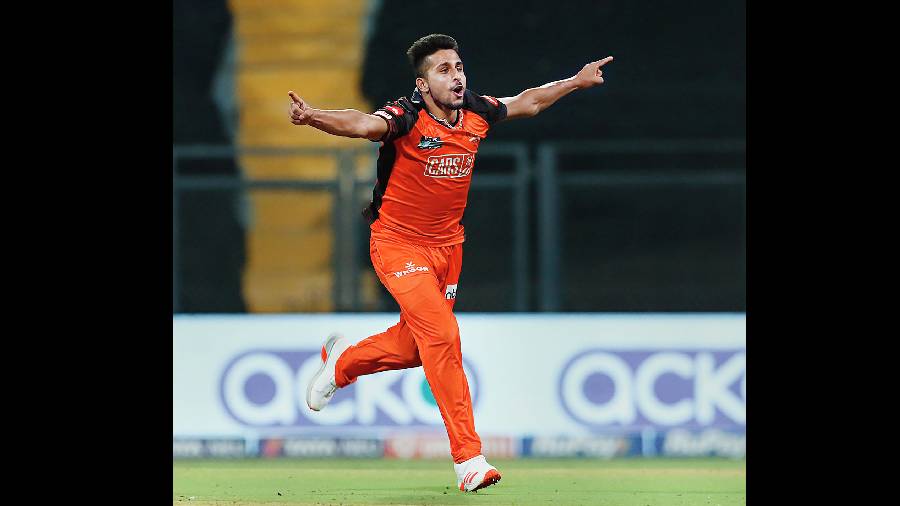 Umran Malik, the young Kashmir pacer who had started IPL 2022 with a bang but whose performance has tapered off a bit, could well draw lessons from Shoaib Akhtar and company.

Shoaib and his pace colleagues had tried to blast Indian batsmen out during India’s tour of Pakistan in 2004. But the ploy to rely primarily on extra pace had backfired for the Pakistan quicks.

The likes of Virender Sehwag, Rahul Dravid and Yuvraj Singh were also able to exploit that extra pace and guide India to their maiden ODI series victory on Pakistan soil. A month before that, Sachin Tendulkar had clobbered Shoaib to all corners during his innings of 98 in that unforgettable 2003 World Cup clash in Centurion.

Raw pace and unleashing thunderbolts close to 160kmph are of course an asset for fast bowlers, but they can also go on to be their weakness. It’s something Umran also needs to understand and learn instead of just looking to intimidate batsmen with his pace.

In what’s only his second IPL season, the 22-year-old, retained by Sunrisers Hyderabad, made the headlines bagging 15 wickets from the first eight matches which included a five-wicket haul versus table toppers Gujarat Lions. But following that breathtaking spell (5/25) at the Wankhede, Umran not just went wicket-less in the next three games but was taken to the cleaners as well. This, in spite of bowling consistently in excess of 150kmph.

Against Chennai Super Kings, he went for 48 off his four overs, was even more expensive (0/52) versus Delhi Capitals and then conceded 25 in two overs versus Royal Challengers Bangalore. In each of these three games, Umran came up against technically-equipped, quality batsmen in the form of Ruturaj Gaikwad, David Warner and Faf du Plessis, who all cashed in on his express pace and paucity of variations.

Going forward, Umran will be coming across more such batsmen. So what can Umran do to break this lean patch?

Former Delhi medium-pacer Sanjeev Sharma, who represented India in two Tests and 23 ODIs, and had coached Jammu and Kashmir in this domestic season, explained: “Umran’s still raw. But he should look to pitch it up a little more which can create problems for batsmen. If you bowl short of good length and at 150kmph-plus on Indian wickets, you won’t be spared.

“So he has to ensure he doesn’t allow batters room to play the cuts and also try and cut down on the width he tends to give outside off-stump. He can’t go down straightaway to 130kmph, particularly with such a run-up. So what he should be looking to do is keeping it in the 140s, which could be his change of pace.

“He needs to use the crease more too, release the ball from a few yards behind the popping crease if he wants to maintain the same speed, and can also come round the wicket keeping point and third man backwards when bowling to right-handers. Batsmen won’t get the width as the ball will then come straight at their body.”

There’s a chance that Umran could be drafted into India’s T20I squad for the home series versus South Africa next month. But some in the national selection committee feel he should have at least one good season of Ranji Trophy before making his international debut.

So far, Umran’s first-class experience, with his debut in Bloemfontein for India A in a four-day game versus South Africa A, is only about three matches with seven wickets.