The victory helped the Bangalore side move to second in the standings with 10 points, while Lucknow are at No.4 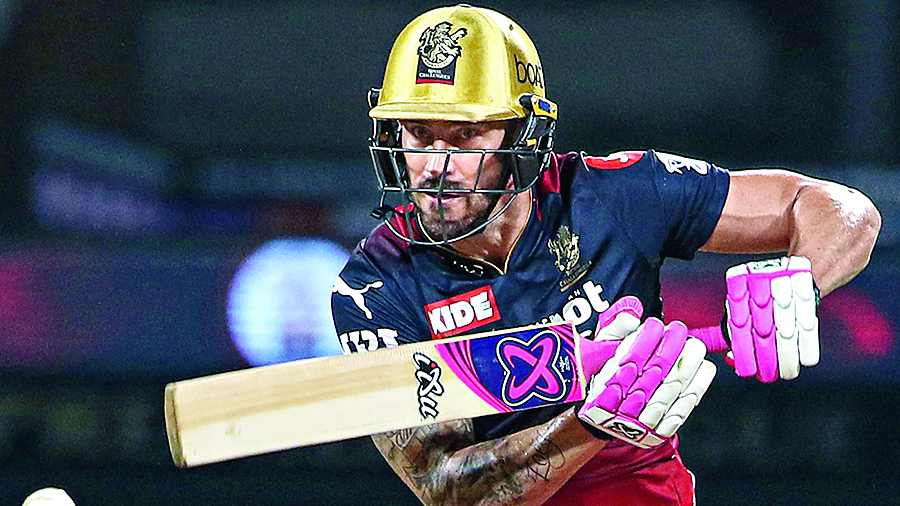 Quality and class don’t die. That’s what Faf du Plessis, 37, proved once again with his 64-ball 96 that was pivotal to the Royal Challengers Bangalore (RCB)’s 18-run win over Lucknow Super Giants at the DY Patil Stadium in Navi Mumbai on Tuesday.

Courtesy captain Du Plessis and his vital 70-run stand with Shahbaz Ahmed (26), RCB could brave yet another wobbly start and post 181 for 6 after being put in to bat. Thereafter, their bowling attack, led by the superbly consistent Josh Hazlewood (4/25), managed to restrict Lucknow to 163 for 8.

The victory helped RCB move to second in the standings with 10 points, while Lucknow (8 points) are at No.4. If Hazlewood was RCB’s star bowler again, the one to get the prized scalp of Lucknow captain KL Rahul was Harshal Patel (2/47).

The decision to review what initially looked to be a wide delivery paid off as television replays spotted a faint edge off Rahul’s bat before the ball was caught down the leg-side by wicketkeeper Dinesh Karthik.

A mention also needs to be made of Shahbaz’s contribution with his left-arm spin in good batting conditions. In spite of going wicketless, Shahbaz gave away only 25 off his four overs.

RCB were struggling at 62 for 4 in the eighth over. Former captain Virat Kohli played a poor shot to be dismissed off his very first ball off Dushmantha Chameera and Glenn Maxwell (23 off 11 balls) threw his wicket away with an injudicious stroke.

It then seemed that finisher Karthik would again have to produce one of his special knocks to take RCB to a respectable total. But Du Plessis ensured he made his presence felt. It wasn’t at all a fluent start from the RCB skipper. However, he rode his excellent temperament to mount the challenges.

Immaculate in terms of his length, Hazlewood made sure Du Plessis’ gem of a knock didn’t go in vain. Yet again, it was the Aussie quick’s Test-match length that helped him dismiss Lucknow opener Quinton de Kock and Manish Pandey. Then in the slog overs, Hazlewood returned to account for Ayush Badoni and the dangerous Marcus Stoinis that virtually sealed the game for RCB.