Indians chase down 109-run target with 16 balls to spare 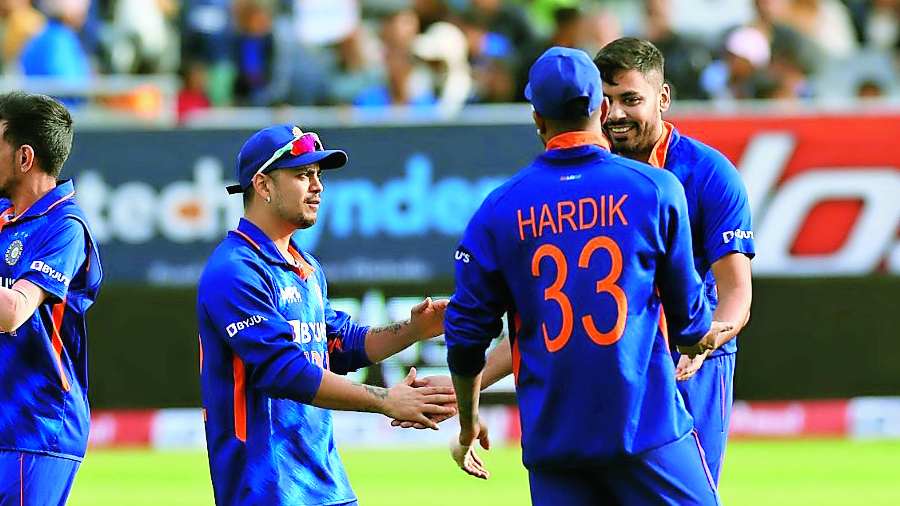 The stop-and-start rain, after India won the toss and chose to bowl, had led to a frustrating wait before the truncated first T20I finally got underway two-and-a-half hours after its scheduled start.

The Indians, though, ensured they didn’t frustrate themselves nor their fans any further as they chased down Ireland’s 108 for 4 with 16 balls to spare to win the 12-overs-a-side game by seven wickets at Malahide in Dublin on Sunday.

The in-form Ishan Kishan (26 off 11 balls) got India off to a flier they needed inside the four overs of Powerplay, before Deepak Hooda (promoted to open the innings in place of Ruturaj Gaikwad) and skipper Hardik Pandya (24) took the visitors home comfortably.

The dismissals of both Kishan and comeback-man Suryakumar Yadav off consecutive balls off pacer Craig Young in the third over of the run chase did set India back a little bit. Although there was still a bit of swing, conditions had become easier for batting and coupled with the Irish bowlers’ inexperience, Hooda (47 not out off 29 balls) and Pandya had few problems in unleashing the big strokes in their 64-run stand for the third wicket that helped India stroll to victory.

For Hooda, it was a slow start, but he overcame that quite well to finish with a strike rate of 162.06.

Earlier, with Bhuvneshwar Kumar and Pandya striking once each in the first two overs of the game, making use of initial overcast conditions, India had Ireland wobbling at 22 for 3 inside four overs.

However, Harry Tector produced a fine knock (64 not out off 33 balls) that took Ireland past the hundred mark, giving their total some respectability. That never quite looked possible after Bhuvneshwar (1/16 off 3 overs) had cleaned up captain Andy Balbirnie off the fifth ball of the game and Pandya had Paul Stirling perishing at the wide-ish mid-off region.

Tector’s knock included six boundaries and three maximums, while he also got some support from Lorcan Tucker (18). In other words, he was the only batter in this Irish side who looked capable of putting a little bit of pressure back on this Indian team, which is experimenting with most of its back-ups and reserves in order to firm up the team ahead of this year’s T20 World Cup.

Most of Tector’s strokes were aerial drives over the off side, while he also swivelled hard and even brought about a reverse-scoop off Avesh Khan in the final over of the Ireland innings.

Together, Tector and Tucker forged an important 50-run stand for the fourth wicket before Yuzvendra Chahal had the latter holing out at deep mid-wicket. Leg-spinner Chahal was once again India’s standout bowler, conceding only 11 off his 3 overs.

Among others, Pandya was expensive after striking in his first over, and so were pacer Avesh and left-arm spinner Axar Patel.

Umran Malik was finally handed his international debut after warming the bench throughout the recent home T20I series versus South Africa. But it wasn’t quite a debut worth remembering for the Jammu and Kashmir pace sensation as he took a bit of a pounding from Tector in the only over he bowled, going for 14 runs.

A confident India, with the T20I series already in their pocket, will look to complete a whitewash when they take on hosts Sri Lanka in the third and final women’s T20 International here on Monday.

The Harmanpreet Kaur-led outfit had thrashed the home team by 34 runs in the opening T20I and then followed it up with a dominating five-wicket win in the second game to take an unassailable 2-0 lead in the series.

More importantly, the wins will be a morale booster for India ahead of the Commonwealth Games in Birmingham starting next month, where women’s T20 cricket is set to make its debut.

India seem to have found the winning momentum, but they won’t be entirely pleased with their performance in the series so far. While the bowlers have done a stellar job in the two games, India’s batting has left a lot to be desired.

Additionally, the Indians have been sloppy on the field.

The bowling unit has been on the mark for India. The spinners have been sensational, making full use of the slow nature of the pitch.