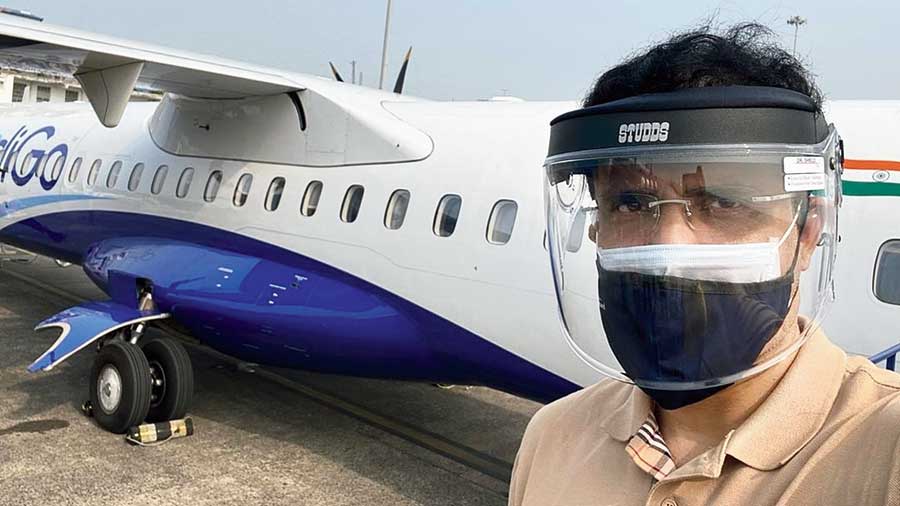 BCCI chief Sourav Ganguly before boarding a flight to Dubai. He said this was his first flight in six months.
Source: instagram.com/souravganguly
Indranil Majumdar   |   Calcutta   |   Published 10.09.20, 01:11 AM

The seven franchises whose cricketers are part of the England and Australia squads engaged in a limited overs series in the UK haven’t yet been informed whether these players will have to serve the mandatory quarantine period upon arrival in the UAE.

“There has been absolutely no communication from the BCCI or the IPL governing council. However, we have booked a chartered flight from Manchester to Dubai and made all other arrangements to transfer the players from one bio-security bubble to another,” a franchise representative told The Telegraph on Wednesday.

The final ODI of the three-match series gets over on September 16 and the cricketers will straightaway head to the airport in a dedicated vehicle that has been earmarked for the players’ travel within the bio-secure environment.

It was learnt that all the franchises, except for Mumbai Indians which hasn’t been affected by this series, are sharing the cost for hiring the chartered aircraft. “It’s not been a huge sum of money as is being projected in some quarters. We are paying around 10 per cent more than what a business class seat in a regular flight would have cost us,” a franchise official remarked.

The crew members will be tested as per bio-security protocol and arrangements have been made so that the players do not have to stop for the regular immigration process. “Immigration will be contact-less and players won’t have to stand in queues. They will land at Royal Air Wing in Dubai and not the Dubai International Airport and be driven away straight from the tarmac,” the official said.

There’s hope that with the arrival of BCCI president Sourav Ganguly and secretary Jay Shah in Dubai on Wednesday, such nitty-gritty will soon be sorted out.

“We have been doing our best to ensure that the players aren’t exposed outside the bio-security bubble. But I guess we have to wait till the last minute to know if the cricketers will be exempt from quarantine,” the official said.

Another franchise official said BCCI would keep a tab on the whole process.

“BCCI will monitor how the immigration process is handled and if the players are exposed to the outside world. If the norms are breached or the BCCI isn’t satisfied with the process, they might ask for quarantine,” he said.

The governing council though kept this possibility in mind while drawing up the schedule. The Royals and Knight Riders will be worst affected if the players are quarantined and hence their opening matches have been slotted for September 22 and 23, respectively.

The IPL rules permit six-day quarantine for cricketers but in Abu Dhabi, where KKR have set up base, government regulations impose a seven-day period for visitors.