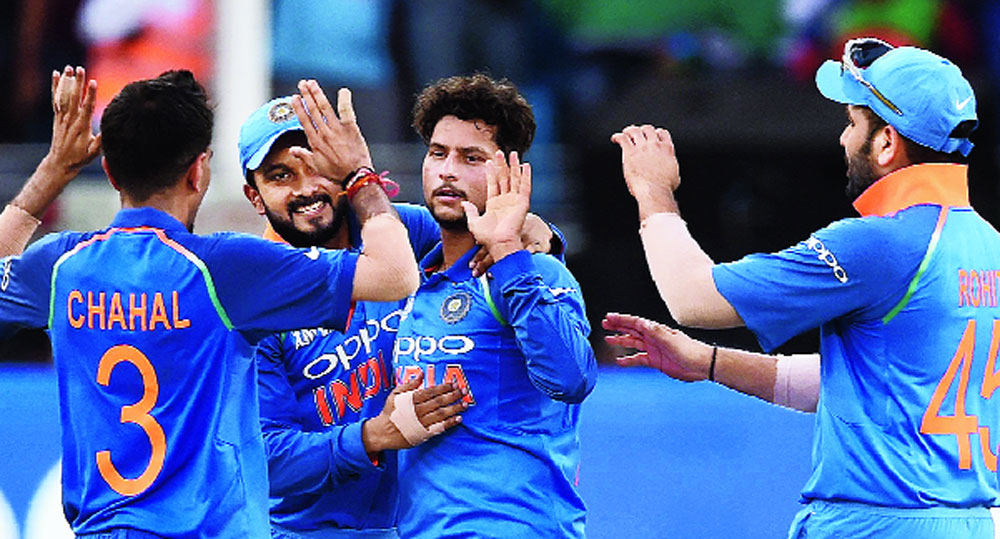 Kuldeep Yadav celebrates with teammates after dismissing Mahmudullah during the Asia Cup final in Dubai on Friday
Image credit: AFP
A Correspondent   |   Dubai   |   Published 29.09.18, 07:20 AM

Liton Das after reaching his century on Friday
Source: Agencies

For a moment it seemed a déjà vu of last year’s Champions Trophy final after India won the toss and opted to bowl, here, at the Dubai International Stadium on Friday.

Liton Das (121) was doing exactly what Fakhar Zaman had done at The Oval. But handing over the momentum and thereby control of the game to the opposition appears to have become Bangladesh’s habit. Particularly, when they face India, who extended their dominance over their neighbours, winning the final by three wickets and the Asia Cup for the seventh time.

After being bowled out for a modest 222, Bangladesh still tried their level best to make a match of it, stretching the game till the very last ball.

Needing six to win off the final over, bowled by Mahmudullah, Bangladesh failed to keep their nerves, especially while fielding, allowing Kuldeep Yadav (5 not out) a single with two needed off as many balls. The last ball was fired down the leg side and hit the pad of Kedar Jadhav (23 not out), who had to walk off earlier after hurting his hamstring, earning India the one run they needed to win the game and the trophy.

Ravindra Jadeja (23) and Bhuvneshwar Kumar (21) looked all set to take India home with their 52-run stand for the sixth wicket, but the game wasn’t over yet for Bangladesh. Rubel Hossain removed Jadeja, while Mustafizur Rahman accounted for Bhuvneshwar to put the game in the balance once again.

But in the end, Bangladesh have themselves to blame largely. From 120 without loss in the 21st over after being put in to bat, they collapsed to 222 in 48.3 overs, unable to even play out their full quota. The Indians’ ground fielding too was certainly top class with stand-in captain Rohit Sharma also remaining calm despite Liton’s early assault.

Rohit, just as he has been right through the tournament, looked in majestic touch during India’s reply but couldn’t score more than 48, with his opening partner Shikhar Dhawan (15) too paying for his over-aggression.

At 83 for three in the 17th over, things looked to be getting a little bit tight for India. Captain Mashrafe Mortaza did all he could to create pressure, rotating his bowlers and keeping a fielder or two in catching position. But the Bangladeshi attack leaked 35 runs in the first five overs that gave India the early momentum.

In spite of that, Mashrafe, Mustafizur and Rubel tried their best to keep Bangladesh alive in the game, but their spinners Mehidy Hasan and Nazmul Islam (replacing Mominul Haq) were extremely disappointing, dishing out poor stuff whenever the pressure looked to be getting on the Indians. With Mehidy completely ineffective, Mashrafe had no other option but to give the ball over to part-timer Mahmudullah in the final over, making matters easier for India.

Even Bangladesh’s ground fielding was below par, giving away easy runs on several occasions that became critical towards the end.

Following Rohit’s departure, Dinesh Karthik and Mahendra Singh Dhoni, after a quiet start, were steady during their 54-run partnership for the fourth wicket, making the equation simpler for India. But Karthik was trapped leg-before wicket by Mahmudullah, while Mustafizur induced an edge off Dhoni a little later.

Both wickets fell against the run of play, with Jadhav too walking off with a hamstring injury after hitting 19 off 20 balls again raising Bangladesh’s hopes. However, Jadeja and Bhuvneshwar were sensible enough to bail India out.

They couldn’t take India home, but made the equation such that even wickets and a few dot balls didn’t cause the side to panic. To be fair to Bangladesh, they certainly tried to make things tougher as the Indian innings progressed. But in the end, it all boiled down to their inexplicable batting despite getting off to a rousing start.

Earlier, courtesy Liton and Mehidy (32), who was promoted to open the innings, Bangladesh got off to a flier and were 120 without loss in the 21st over. Looking at what happened thereafter, one can only feel bad for Liton.

Fearless in his approach against Bhuvneshwar and Jasprit Bumrah, Liton showed the intent that was needed from Bangladesh after they were put in to bat. India were under the cosh then, and Rohit had to bowl Chahal for two overs within the first 10 overs itself, while Kuldeep (3/45) and Jadeja bowled the 11th and 12th, respectively.

Liton’s drives, pulls and the sweeps against spinners reflected his superb timing, symbolising a pumped-up Bangladesh determined to turn the tables on this occasion. But then, India’s newfound “man with the golden arm” — Jadhav (2/41 off nine overs) — struck in his very first over with an innocuous delivery that got rid of Mehidy.

For sure, one has to credit India for being able to maintain the pressure on the opponents by striking at regular intervals.

Barring that one dropped catch, which Chahal shelled at midwicket off Jadeja’s bowling early in the 12th over, India’s fielding was absolutely fantastic.