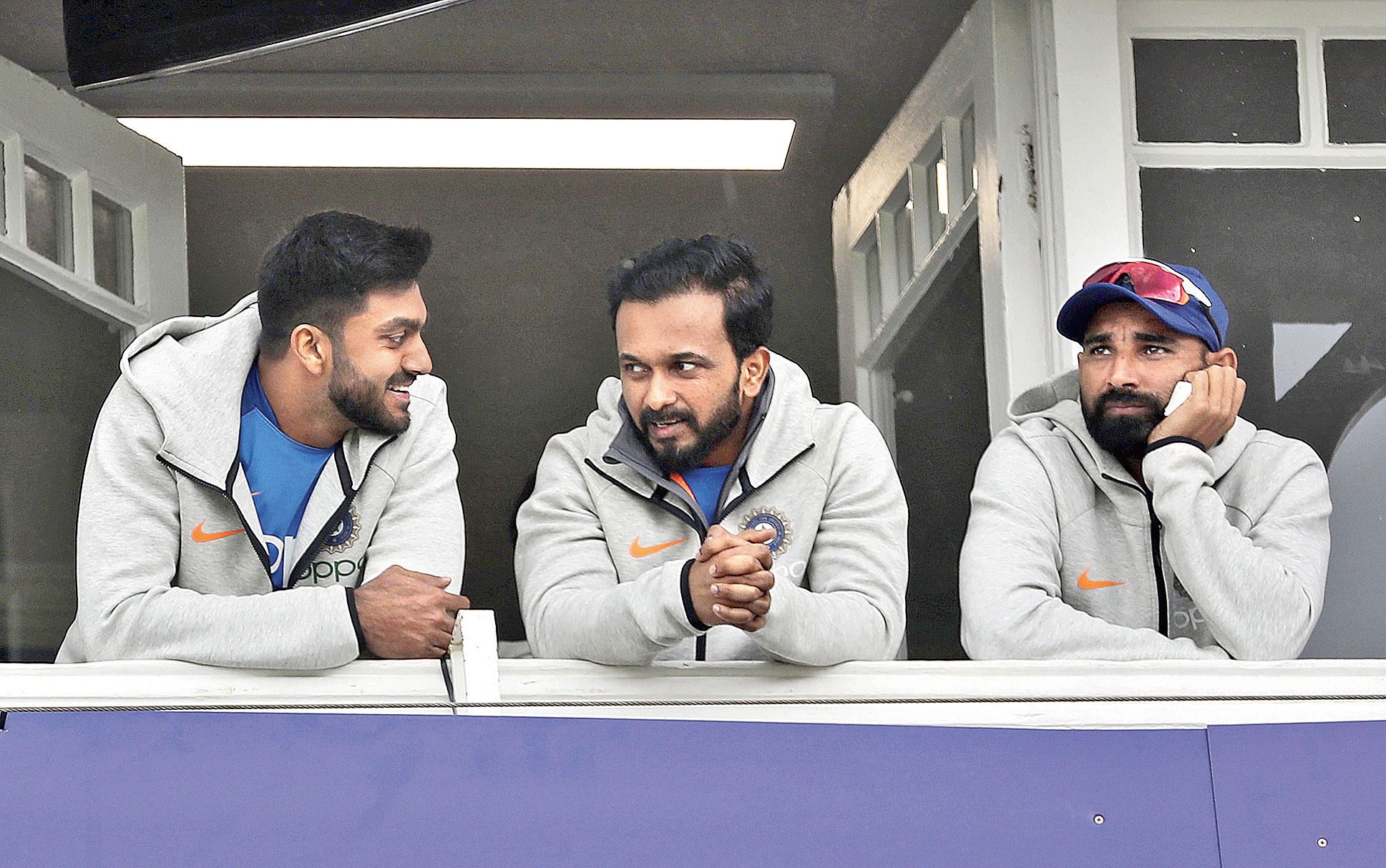 Vijay Shankar (from left), Kedar Jadhav and Mohammed Shami outside the India dressing room at Trent Bridge on Thursday. The World Cup game against New Zealand was abandoned without a ball being bowled.
(AP)
Indranil Majumdar   |   Nottingham   |   Published 13.06.19, 09:45 PM

A retro charm always fascinates cricket lovers at Nottingham and the Trent Bridge.

You can travel to Sherwood Forest to hear Robin Hood’s tales and experience the sights and sounds as part of a tour of the town.

There’s also the Larwood and Voce Pub — named after two sons of the soil Harold Larwood and his new-ball partner Bill Voce of the infamous Bodyline series of 1932-33 — just across the cricket ground, which has been renovated for £50,000 recently.

A portrait of the shattered leg stump with a red ball at the entrance signifies what Larwood loved doing the most. The recently-introduced Larwood cocktails are the most sought after.

Drinks, no doubt, will be plonked down amid endless chats late into the night after spectators were left cursing the weather on Thursday afternoon.

Intermittent rain and a steady drizzle left the outfield slushy forcing the umpires Marais Erasmus and Paul Reiffel to call it off at 3 pm (local time). The pitch stayed covered right through as there wasn’t even an opportunity for the toss.

The India-New Zealand match is the third one in World Cup 2019 to be washed out completely after the Pakistan-Sri Lanka and Bangladesh-Sri Lanka encounters.

Points were also split in South Africa’s match against West Indies because of rain after they had batted for 7.3 overs. Only two matches had been abandoned ever in the World Cup before this edition.

“It’s always tough mentally on a day like this when you come down prepared to play, and it doesn’t happen,” New Zealand coach Gary Stead said. “But as you said, it’s out of our control. We can’t really do much about it.”

India’s fielding coach Ramakrishnan Sridhar agreed. “Yeah, it is frustrating to wait in the dressing room on a rainy day. It’s a challenge for the players and the support staff to switch down but not really switch off, because the match could start at any time…

“So keep yourself prepared at the back of the mind. At the same time, not think too much about the game and keep yourself a little busy, reading, some music, or chatting with friends. But we deal with it all the time.”

Sridhar agreed it was not the ideal preparation for the match against Pakistan in Manchester on Sunday.

“We’ve had two good games. We came here looking forward to the third good one, but unfortunately, we can’t control the weather.”

The demand for reserve days for teams getting affected is sure to grow though Stead and Sridhar didn’t quite sound enthusiastic.

“Reserve day is going to be a logistical nightmare. The ICC has made that fairly well-known. Unfortunately, it’s a bit of an anomaly already,” said Stead.

“When you look at the amount of days we’ve lost already, I think it’s the biggest in a World Cup ever. So we can’t do much about that. We just have to, I guess, push on with what the schedule is.”

Sridhar felt it was for the ICC’s technical committee to take a decision on the issue.

The Indian spectators, who have nullified the concept of the away game, had waited patiently dancing to the sounds of the traditional dhak, besides the Hindi chartbusters.

But there was nothing they could have done about the uncontrollables. Perhaps the Larwood and Voce Pub offered some solace at the end of the day!