Being a part of the RCB set-up since last year, the fast bowler says he feels a lot more at ease with the franchise this season 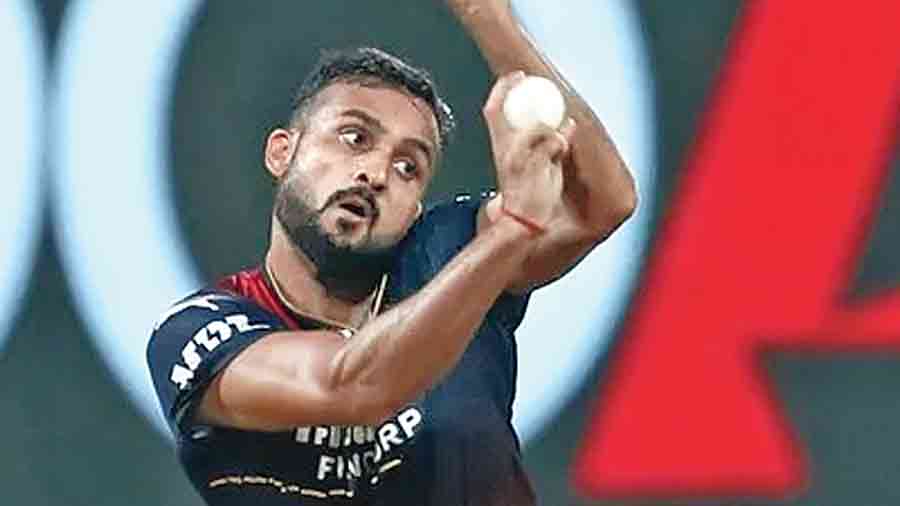 Akash Deep went off to sleep not before three in the night on Wednesday. Call that Thursday. Then, he gets up in the morning and gets in touch with Arun Lal and Sourashish Lahiri, his coaches in the Bengal set-up, seeking their opinion on his performance for the Royal Challengers Bangalore against Kolkata Knight Riders.

The pacer had a very impressive outing, taking 3/45 in 3.5 overs, for his team in their three-wicket win in Navi Mumbai on Wednesday.

Clocking in excess of 140kph consistently, Akash’s double strike (scalps of Venkatesh Iyer and Nitish Rana) had choked the Knights in the Powerplay.

For Akash, though, it’s just the start of his journey and he’s quite careful about keeping his feet on the ground. “More than the excitement of performing at this level, it’s about the responsibility that’s on me — to do well and contribute to my team’s success,” the 25-year-old told The Telegraph. “Being aware of my responsibility is what matters if I have to survive and succeed at this level.”

Besides being responsible, Akash also comes across as a dedicated student of the game, whose only focus is on cricket. That probably is the reason why he doesn’t mind staying at the Cricket Association of Bengal dormitories (within Eden Gardens premises) even though they aren’t that luxurious. “See, I came to Bengal to play cricket and establish myself in this field.

“So if I live in those dormitories, I can concentrate on cricket most of the time and avoid all other distractions. I don’t want my mind to get diverted from my goal,” Akash, who is originally from Bihar, emphasised.

Being a part of the RCB set-up since last year, when he was roped in as a net bowler during the second phase in the UAE, Akash said that he felt a lot more at ease with the franchise this season. “If you win the confidence of the captain and the coach, it does get easier and also serves as a motivation,” he stated.

Akash’s IPL debut wasn’t too inspiring, as he went for 38 off his three overs with just one wicket to show against Punjab Kings last Sunday. But against the Knights batsmen, he focused on the short ball as well as back-of-a-length deliveries, which is also his strength along with the yorker. And that’s how he got rid of both Iyer and Rana.

“I just concentrated on the plan given to me, which was to bowl the hard length. I backed my strengths and tried to execute what I’ve been doing all this while,” Akash said.

That said, is his economy rate a bit of a worry? “He just needs to avoid those no-balls,” feels Lal, adding: “On tracks where 200-plus totals are being chased down, you really can’t blame bowlers much.”

Akash, by the way, didn’t forget to thank Lal and Lahiri, two of his biggest backers since graduating into the senior level from Bengal U-23. The promising speedster surely has his head in the right place despite the all the glitz that the IPL universe comes with.