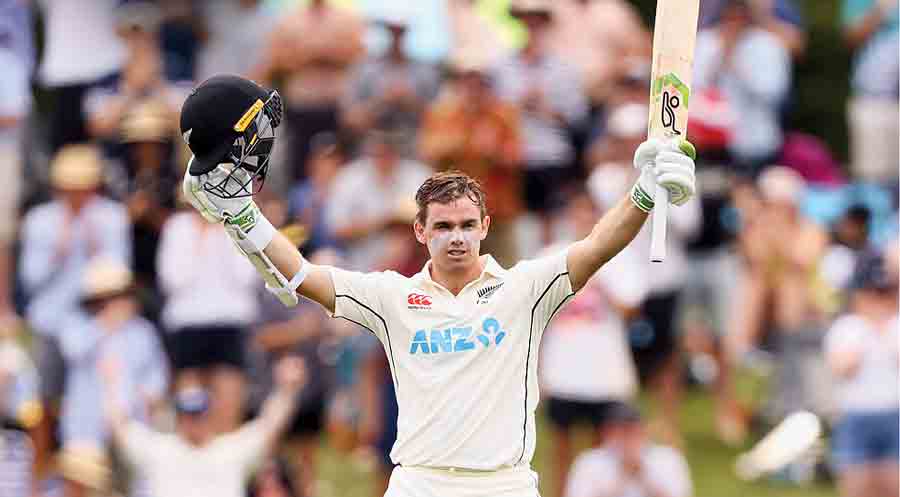 Tom Latham of New Zealand celebrates his century on the opening day of the second Test against Bangladesh in Christchurch on Sunday.
AP/PTI
Agencies   |   Published 10.01.22, 03:22 AM

Captain Tom Latham smashed an unbeaten 186 as New Zealand bounced back from their shock defeat in Mount Maunganui to amass 349/1 on the opening day of the second and final Test against Bangladesh on Sunday.

Latham raised 148 runs with fellow-opener Will Young and then consolidated New Zealand’s position with his still-flourishing 201-run stand with Devon Conway, who remained not out on 99.

“I’m a bit nervous naturally but I’ll try to take a sleeping tablet to help me go to bed,” Conway said. “It was special today (Sunday), considering the fact that we lost the toss. I think both teams wanted to bowl first. The way Tom (Latham) and Young went about their work was really special and Tom was outstanding to bat throughout the day and I was just grateful to bat beside him.”

New Zealand batting coach Luke Ronchi told reporters: “The way Tom hit some of his drives, the sound of ball meeting the bat was awesome.”

“To be not out and bat the whole day and to be continuing tomorrow (Monday) with Devon...it was a fantastic effort from both ends.”

Smarting from their shock defeat in the series opener, world Test champions New Zealand got the perfect start with Latham leading by example after being put into bat at Christchurch’s Hagley Oval.

The left-hander, leading the side in the absence of an injured Kane Williamson, was given out lbw to Ebadot Hossain twice in the ninth over and both decisions were reversed after the batsman reviewed them.

Ebadot created another chance soon after the lunch break but Liton Das spilled Young, then on 26, at second slip with the batsman rubbing salt in the wound with a rare seven runs after running three and picking up four overthrows.

Shoriful Islam finally broke the stand when he had Young caught at gully for 54 but Latham continued to punish the wayward Bangladesh bowlers as he raced to a 133-ball century.

Latham, whose free-flowing knock included 28 boundaries, was on 169 when Bangladesh blew a review trying to get him caught behind.