Day-Night pink-ball Test: All set to beat the conditions 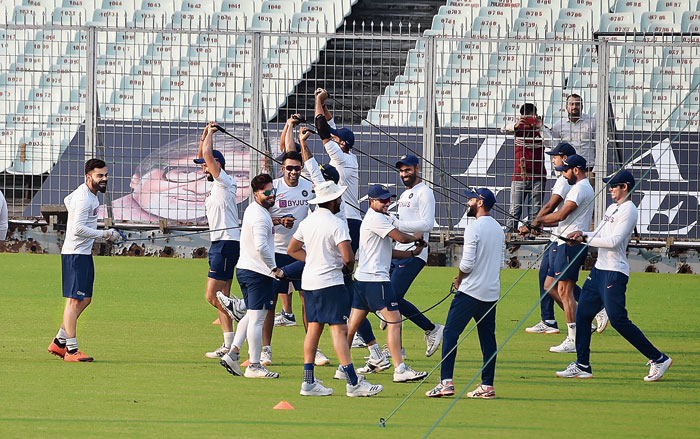 The track at the Holkar Stadium with a bit of grass on it was quite helpful for fast bowlers and the first Test got over inside three days.

Over to Eden Gardens now and the pitch for the first-ever Day-Night pink-ball Test looks a tad greener, apart from the extra bounce the pitch has been offering for the last couple of years.

The pink ball tends to help fast bowlers and considering the form India’s pacers are in at present, tougher times could be in store for Bangladesh. For the record, Mohammed Shami has been the fieriest among the three pacers in the XI.

“Whether it’s red or pink, Shami will always be deadly with the ball. He has done well in the recent matches and whatever the conditions, he does well.

“In Ranchi and in the last game (in Indore), he got the ball to reverse swing and with pace…We aren’t too sure about the movement of the ball, but it won’t really matter, as Shami will be able to deliver and trouble the batsmen given his current form,” Wriddhiman Saha said on the sidelines of Wednesday’s training session at the Eden.

Among the few players in the current Indian line-up, Shami and Saha were part of the CAB Super League final at Eden Gardens in 2016, when the first-ever multi-day pink-ball game was held in India.

The pink ball may not reverse swing that much, but that doesn’t seem to be a problem for the Indians.

“Chances might be less for the pink ball to reverse swing, but our bowlers have the talent and ability to still get it right,” Saha emphasised.

Cricket Association of Bengal curator Sujan Mukherjee stressed that the Eden wicket will be lively. “The pitch will not just be a sporting one, but lively too. And there will be firm and even bounce at the same time,” Mukherjee said.

Both India and Bangladesh are yet to play a pink-ball Test, but hardly anyone in the visiting team contingent has ever played even a first-class game with it. The only pink-ball game held in Bangladesh so far was back in 2013.

And then obviously, India are in a better space and frame of mind after the hammering they gave Bangladesh in Indore last week.

Saha, too, was quick to point out India’s greater experience compared to their rivals with the pink ball. Having said that, the twilight period and dew are factors with which India need to adapt, he reminded.

“Look, every international match is a challenge. Every ball brings with itself a challenge.

“Yes, we have more experience with the pink ball, but with the twilight period coming into play and taking the dew factor into consideration, we have to apply ourselves on the ground,” the wicketkeeper-batsman explained.

Saha didn’t commit many errors while keeping in that CAB Super League final three years ago. Yet, he is wary of the ball’s visibility factor, starting from the twilight period when it becomes a bit old.

“The ball wobbles when our pacers bowl, which is a factor. But having said that, I need to accept the challenges,” Saha said.

“…Don’t know the sightscreen colour... The ball may get a bit old during twilight time.

“So, if the backdrop is not clear, it’s also going to be challenging for the ’keepers.”

During India’s practice session, the likes of Virat Kohli, Rohit Sharma and Ajinkya Rahane started batting at nets not before the twilight period. Facing the likes of Ishant Sharma, Shami and Umesh Yadav won’t be easy in the circumstances.

“Conditions wise, the twilight time will be challenging especially when it comes to picking the ball. We have to adjust, though.

“The ball is new and will most likely help pacers. It could be challenging for the batsmen,” Saha said.