Smashing 12 boundaries and three maximums, the Australian remained unbeaten on 92 off 58 balls 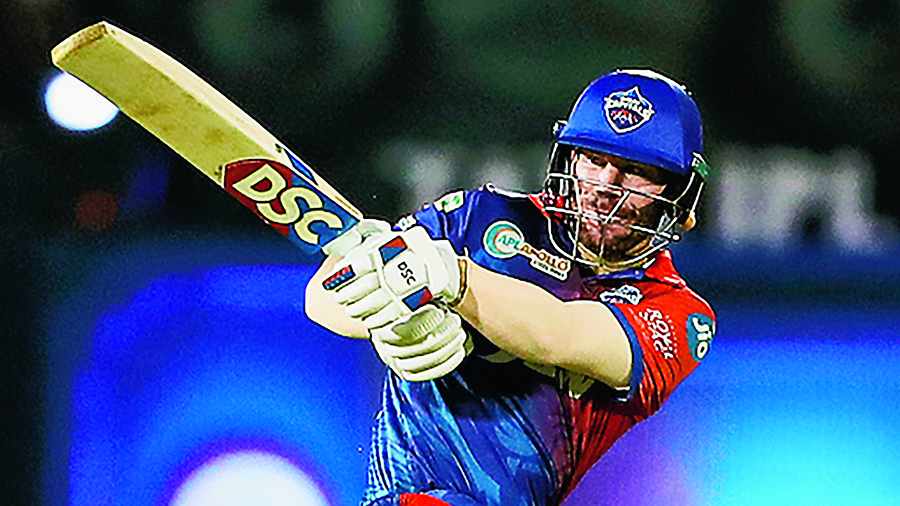 Warner during his unbeaten 92 against Sunrisers Hyderabad at the Brabourne Stadium in Mumbai on Thursday.
PTI
Sayak Banerjee   |   Published 06.05.22, 01:30 AM

The unceremonious exit from Sunrisers Hyderabad after last year’s IPL obviously didn’t go down well with David Warner. And he picked Thursday’s contest at the Brabourne in Mumbai as the ideal occasion to give a fitting reply to his former team.

Smashing 12 boundaries and three maximums, Warner remained unbeaten on 92 off 58 balls. His classy innings seemed more like a statement that powered Delhi Capitals to 207 for 3 after they were put in to bat, also laying the foundation for their well-deserved 21-run win over the Sunrisers.

Warner looked deadlier with each stroke he played and in Rovman Powell (67 not out), whom he guided along, the Australia opener found an able ally to pulverise the Sunrisers attack in an unbroken 122-run partnership.

The Sunrisers, in reply, lost openers Abhishek Sharma and captain Kane Williamson along with No.3 Rahul Tripathi off the bowling of Khaleel Ahmed, Anrich Nortje (who replaced Mustafizur Rahman) and Mitch Marsh, respectively. Alongside the scoreboard pressure, those early dismissals made the Sunrisers’ task even more arduous.

All they could manage ultimately was 186 for 8. That too, after yet another solo effort from Nicholas Pooran (62). While the Sunrisers suffered their third straight defeat to slip to sixth in the standings with 10 points, the Capitals (10 points) are up to No.5.

Impeccable timing and placement were also a feature of Warner’s knock along with the power he generated in his strokes.

Skipper Williamson brought on Umran Malik early in the fourth over to surprise Warner. Forget being surprised, Warner instead took the young pace sensation on, hitting him for two fours and a six as Umran’s opening over cost him 21.

After Ruturaj Gaikwad (last Sunday in Pune), Warner too showed that Umran (0/52) still needs to work on his bowling, particularly when up against quality batsmen.

Powell’s 35-ball knock was all about sheer power and stand-and-deliver stuff, which yielded him as many as six maximums and three boundaries.

Powell was lucky early on when Williamson dropped a sitter at mid-off in the 15th over of the Capitals innings bowled by Umran. He was on 18 then and duly made the Sunrisers pay, hammering Umran for a six and three boundaries in the innings’ final over.