Advertisement
Home / Sports / Cricket / Dada made me the player I am: Harbhajan after retirement

Dada made me the player I am: Harbhajan after retirement

'Ganguly handled me at that juncture of my career when I was a 'No One'. But when Dhoni became the captain, I was a Someone' 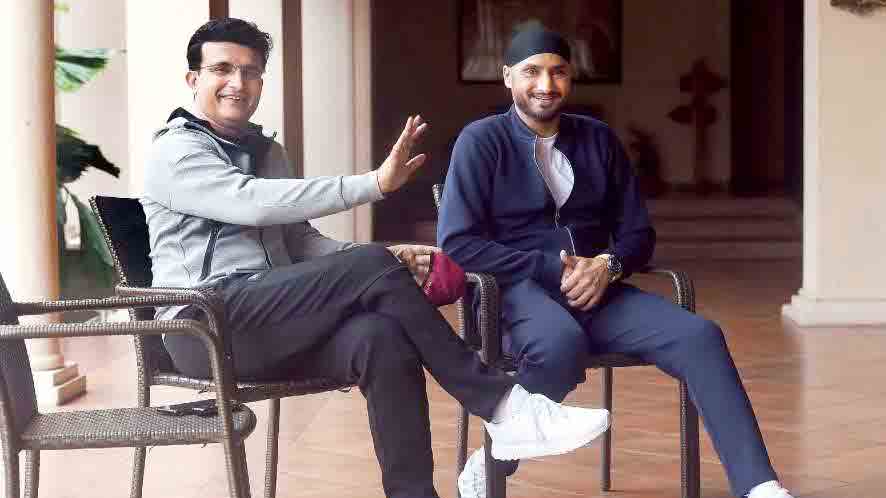 Harbhajan Singh did feel bitter during the dark phase of his career in 2015-16 as he was repeatedly overlooked but as he called time on his illustrious cricket career spanning 23 years, regret had no space in his mind even though he felt he could have got the timing better.

In a freewheeling chat with PTI, he spoke about his journey, the captains he played under, how Indian cricket could do with a bit more empathy and also the infamous 'Monkeygate' and the emotional toll it took on him. Excerpts:

Do you feel that you announced the retirement a bit late?
Well, I must admit that the timing isn't right. I am late and there are no two ways about it (he last played for India in 2016). Normally, I have been a very punctual person all my life, stickler for (being on) time. Perhaps, this is one time, when I have been late. It's just that while being on the road, I missed the timing. But trust me, I am punctual (smiles.)

Has Indian cricket been fair to you in last few years?
Look, life can always be looked at from two different prisms. If I see from where I started as a small town boy from Jalandhar with absolutely no idea about worldly matters to where I ended, I can only count my blessings and thank the almighty, thousand times over. Even then, it won't be enough to show how grateful I am because of cricket.

But then if I look at things from a different prism, may be a thought would cross my mind that I could have had a different end to my cricket career.

But then, no regrets because when I look back, what I have got far outweighs what I didn't. No need to be bitter if I see where I started.

Do you have any regrets about the 'Monkeygate' scandal involving Andrew Symonds? Do you feel angry about how it unfolded?
Obviously it was something that was uncalled for. Whatever happened during that day in Sydney shouldn't have happened and also what it led to. It was really unnecessary. But forget about who said what. You and I both know truth has two sides.

You have 711 International wickets and 18 years between 1998 and 2016 in which nearly 800 days on the ground. How do you sum up your journey?
Great. It's been a roller-coaster journey. Loads of ups and downs. But that's how life is. Even sea waves have crests and troughs isn't it? Very blessed to have played for India for so long. If you played 377 games for India, well that's not a bad number.

What would have happened if I wouldn't have been an India cricketer? Where would I have been and what would I have done with my life? Indian cricket gave me an identity. This is a forever debt and I will not be able to pay off. I am what I am because of he institution called Indian cricket.When I look back and see the kind of greats that I have played with -- Sachin Tendulkar, Rahul Dravid, Sourav Ganguly, VVS Laxman, Virender Sehwag, MS Dhoni, Zaheer Khan. And last but not least, what a privilege it was to be Anil Kumble's bowling partner. An absolute legend who taught me a lot.

You picked 32 wickets against Australia in 2001 Test series, won the 2007 T20 World Cup and also 2011 ODI World Cup. Which one is your favourite cricketing moment?
For every cricketer, you need that one performance after which people will sit up and take serious notice. 2001 versus Australia was my watershed moment. If 32 wickets and a hat-trick wouldn't have happened against a team of that might, who would have spoken about me? I could well have ended being a footnote.

Australia series ne mera wajood banaya. Mera astitva ke saath juda hai. (It's intrinsic to my identity). It proved that I won't disappear after one or two series. It proved I belonged here.

Indian cricket was in a mess in 2000 after the match-fixing scandal. People had lost faith in the game. To bring them back to the stadium and make them fall in love with the game, you needed those 32 wickets or that 281 by VVS. It was a turnaround that Indian cricket needed. It was magical.

Did you speak to all your teammates individually before announcing retirement?
Well, I spoke to the BCCI president Sourav Ganguly, the man who made me the player I became. I told him about my decision. I also spoke to BCCI secretary Jay Shah and informed him about my decision. Both were very welcoming and wished me well. In my journey, BCCI had played a big role and I am indebted to them. I spoke to Mumbai Indians owner Akash Ambani as the franchise had a big role in my life. Everyone is very special to me, who have been a part of my journey. Some like Sachin paaji, Dada, VVS (Laxman), Yuvi (Yuvraj Singh), Viru (Virender Sehwag), Ashu (Ashish Nehra) are like family.

You played most of your cricket under Sourav Ganguly and MS Dhoni. Give us a sense of how you would compare them as leader of men?
It's a simple answer for me. Sourav Ganguly handled me at that juncture of my career when I was a 'No One'. But when Dhoni became the captain, I was a "Someone". So you need to understand the big difference.

In life and in profession, you need that one person, who will guide you at the proper moment and Sourav was that man for me. If Sourav wouldn't have fought for me and got me in the team, who knows, today you might not be taking this interview of mine. Sourav is the leader who made me what I am.

But yes, Dhoni certainly was a very good captain and he carried the legacy of Sourav and with Dhoni, together we fought some great battles that I will certainly cherish.

But coming back to the phase after the 2011 England tour where you had that abdominal muscle tear and post that you hardly played Tests till 2016. Don't you feel that establishment back then, both in the team and outside could have given you greater support?
No doubt things could have been better. After I came back from injury in 2011, where did I get enough chances? It just kept spiralling downward. Before I realised, I was pushed out of scheme of things. Yes, if at that point, if someone would have cared for me and in a broader sense, how Indian cricket handled its players, may be my career could have been different. But no regrets. Those who were decision makers did what they felt was right. So I have nothing to say. Yes, I was bitter back then but when I now look at things, no bitterness.