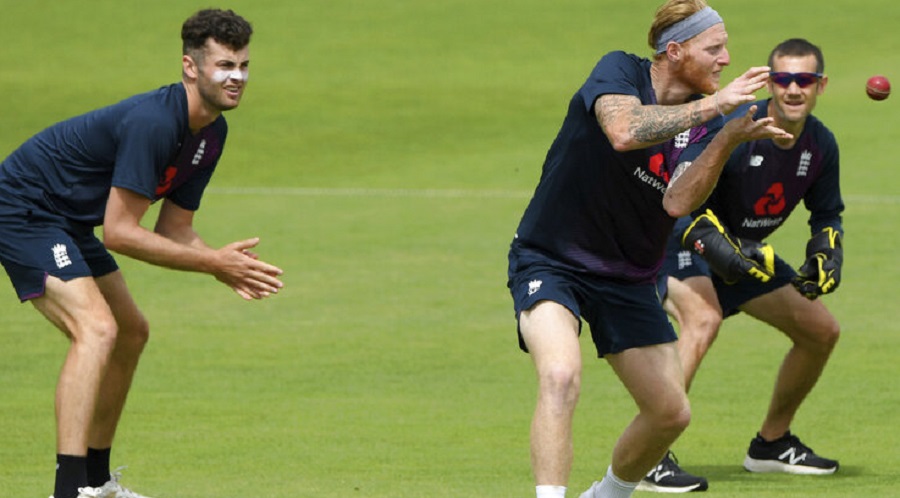 England captain Ben Stokes with Dom Sibley and Zak Crawley during practice at Ageas Bowl on Tuesday.
AP
Our Bureau And Agencies   |   Calcutta/Southampton   |   Published 08.07.20, 02:23 AM

Cricket will not just be a battle between the bat and the ball when action resumes on Wednesday, it will be a fight to thwart the pandemic bouncers on a newly laid pitch of drastic rules and regulations.

So when England take on the West Indies in the first of three Tests, at the Ageas Bowl, the world will watch not just the swings and drives, the spotlight will also firmly be on the changes in playing conditions formulated by the ICC to ensure safety of players and officials.

The most important of all is the bio-secure environment that has been created to facilitate the resumption of the game. The matches will be held behind closed doors; both players and officials will live at on-site hotels at the venues.

The grounds have been divided into designated zones to separate the two teams, match officials, ground staff and the media.

To make up for the absence of fans and the buzz that they add to the environment of a cricket match, broadcasters will play the hum of the Lord’s crowd during play for the television audience. There will also be an on-ground announcer, as is the usual practice.

Players and officials are being screened daily for symptoms and will regularly be tested for Covid-19 even during the match.

If any player shows signs of Covid-19 during a Test match, the team concerned will be able to substitute that player. It will of course have to be a like-for-like swap, like it is for concussion replacements.

Players are no longer allowed to apply saliva on the ball to shine it. While there will be some leniency to it initially to allow the players to adjust, umpires will be giving official warnings to the teams if they fail to adhere to the new regulation.

Each team can receive two warnings per innings before incurring a five-run penalty to the batting side.

With both England and the West Indies being pace-heavy sides, it will be interesting to see how the James Andersons and Shannon Gabriels put a leash on their habit of years and shun the saliva.

Each team will also have an extra DRS review per innings, meaning a total of three unsuccessful DRS reviews per Test innings now.

There will be no “neutral” umpires owing to “logistical challenges with international travel”. So Englishmen Richard Illingworth and Richard Kettleborough will be the on-field umpires for the first Test.

Former England opener Chris Broad will be the Match Referee for the series. With Stuart Broad being there in the England squad, imagine father Chris having to take action against his own son should there be any such incident! The new normal, they say.

As far as the game proper is concerned, England start as outright favourites with many experts questioning if the West Indies can last the five-day duration of the Test.

Stand-in England captain Ben Stokes says regular skipper Joe Root has given him a simple piece of advice ahead of Wednesday’s first Test — do it your way. With Root opting out because of the birth of his second child, Stokes will get to pit himself against West Indies counterpart Jason Holder.

“The best message I’ve received was when I got my photos done yesterday, with the blazer. Rooty just left a message on the hanger which said, ‘Do it your way’,” said Stokes.

But the all-rounder says he knows that he will be able to turn to Root for advice at any stage during the match.

“Because of Joe’s personal situation, we’ve been letting him deal with that and I haven’t been on him too much. But I know he’ll be at home watching and his phone will always be available if I need him,” he added.

West Indies coach Phil Simmons believes the opening Test will be a battle between two all-rounder captains. “Hopefully Jason can do what’s necessary to get on top of Ben in this first Test,” Simmons said.