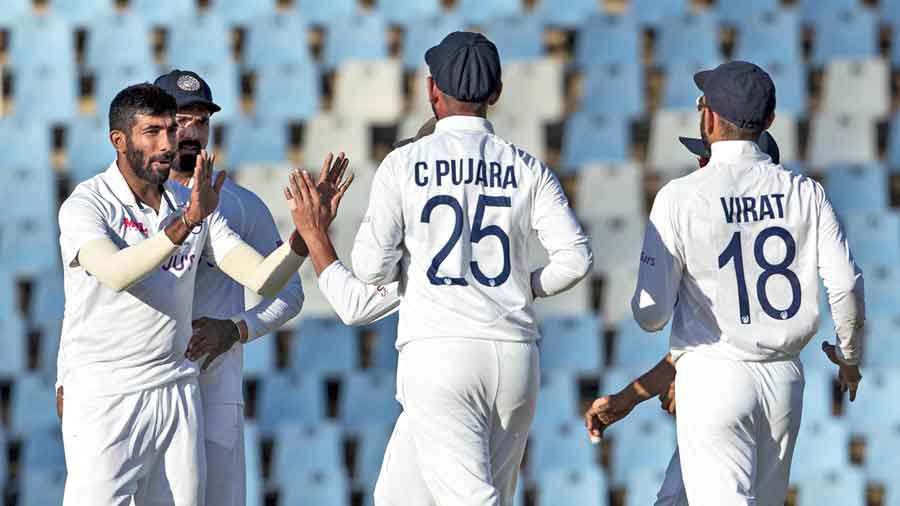 Team India would certainly be content with the Supersport Park pitch, which expectedly threw up tricks on quite a few occasions during the penultimate day of the first Test in Centurion and should go on to make the going even tougher for South Africa on the final day.

The uneven bounce on the wicket is something India would, of course, be relishing as they still have six more South African wickets to take in order to win this Test. At stumps on Day IV, South Africa, set a difficult target of 305, were wobbling at 94/4 with India’s quicks taking good advantage of the rival batsmen’s ultra-defensive mindset.

However, Virat Kohli and his bowlers in particular would be keeping an eye on the weather too. There’s a forecast of rain and thunderstorms in certain parts of Centurion on Thursday, and India would hope that doesn’t turn out to be a deterrent in their bid to go one up in the series.

As for the Proteas, they must be praying for inclement weather to come to their rescue. Experts, though, predicted that the elements wouldn’t be so severe as was the case on Day II of the Test, which had been washed out.

Irrespective of the outcome, what goes down as a massive plus for India is how their fast bowlers fared in the game. Agreed they are up against a side that is not at all the strongest in terms of batting, but Jasprit Bumrah, Mohammed Shami and Mohammed Siraj were all relentless when it came to keeping the opposition batsmen under pressure.

They were also helped by the South African batsmen, who had gone into their shell right from the start of their second innings. But that aside, all the three pacers, including seamer all-rounder Shardul Thakur, bowled a probing line with the pitch too providing fair assistance. While some of the balls reared up, some kept quite low as well.

Unable to exert much in the first innings after spraining his right ankle, Bumrah has already had his effect on the Proteas with his late strikes in the day’s final session to tilt the balance very much in favour of India.

Skipper Dean Elgar (52 batting) and Rassie van der Dussen kept the Indian bowlers at bay for quite some time, but Bumrah ended their resistance just when India were in need of a breakthrough. Pitching it outside the off-stump, Bumrah got one to jag back and clean up Van der Dussen, who erred in judgement by offering no shot.

Soon after, in the day’s final over, Bumrah unleashed a superb yorker to knock over night-watchman Keshav Maharaj and keep India very well placed to wrap up the Test. The ability to surprise batsmen with a yorker is certainly one big advantage of Bumrah, who till then was negotiated reasonably well by Maharaj.

Bumrah seems ready to deliver the killer punch and India couldn’t have asked for anything more.

India have more than a fair chance to win the game going into Day V, but what cannot be swept inside the carpet is the chinks in their batting. Batting indeed hasn’t been easy on this wicket since Day III, but the collapse in their first innings and being all out for 174 in the second does reflect that head coach Rahul Dravid needs to take the matter up with the batsmen, including skipper Virat Kohli.

On several occasions before this Test, Kohli had been dismissed fishing outside the off-stump. His mode of dismissal in Centurion too was similar as on Wednesday. It was debutant Marco Jansen’s turn to make him edge one outside the off-stump, after Lungi Ngidi did so on Day I.

As for Cheteshwar Pujara, his struggle continued. If not for Kagiso Rabada shelling a simple chance at short mid-wicket, the India No.3 would again have perished

for a single-digit score. Speaking of Ajinkya Rahane, he again began well, only to play a needless shot and throw his wicket away.