Team scores a massive 773 for 7, which is also their highest-ever total in Ranji Trophy 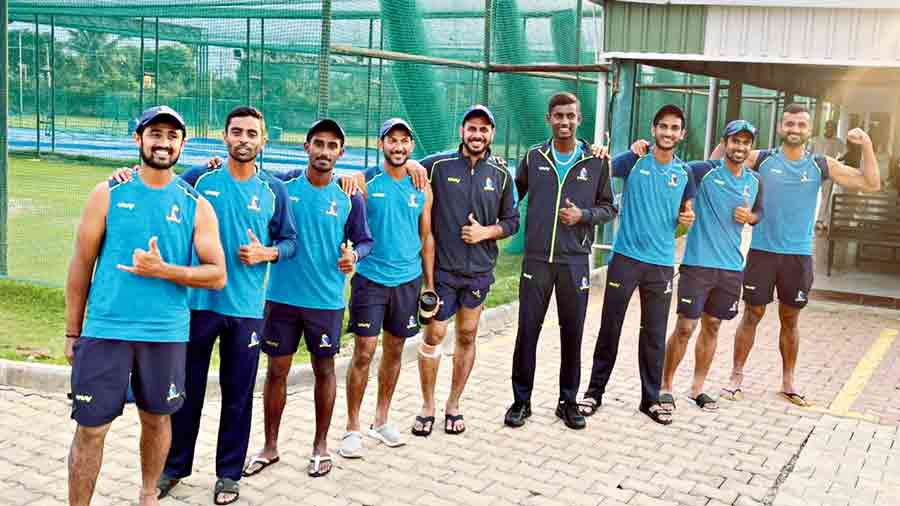 The top-IX Bengal batters who all scored 50-plus runs, setting a record, during the ongoing Ranji match against Jharkhand, on Wednesday
CAB Media
A Staff Reporter   |   Published 09.06.22, 03:03 AM

Batting has been Bengal’s perennial problem for over a decade. The current Bengal batting line-up, however, proved it’s different. The line-up has no star players as such, yet it helped Bengal script a world record in first-class cricket during their Ranji Trophy quarter-final clash versus Jharkhand at the Just Cricket Academy ground in Bangalore on Wednesday.

Bengal declared their first innings at a massive 773 for 7, which is also their highest-ever total in Ranji Trophy. But what stands out is that all their top nine batters scored 50-plus runs — a first in first class cricket.

When Sayan Shekhar Mondal, Bengal’s No. 8, reached his half-century off the first ball after lunch on Day III on Wednesday, it became the first instance of the top eight batsmen of a team scoring 50 each in a first-class innings.

After centurions Sudip Gharami and Anustup Majumdar, captain Abhimanyu Easwaran, Abhishek Raman, Manoj Tiwary and Abishek Porel scored over 50 on the first two days of this quarter final, all-rounder Shahbaz Ahmed hit 78 on Wednesday before No.8 Mondal reached the mark just after lunch on Day III.

With Mondal’s 50, Bengal had matched the record of the touring Australians against Oxford and Cambridge Universities in Portsmouth in 1893. In the Australians’ team total of 843 in the first innings, eight of their batsman had scored a half-century, though it wasn’t the top eight batters.

Bengal then bettered their feat as pacer Akash Deep, coming in at No.9, hit a blitzkrieg 53 not out off 18 balls before the declaration was announced.

With Jharkhand wobbling at 139/5 at stumps on Day III, it’s fair to say Bengal have one foot in the Ranji semi-finals.

For head coach Arun Lal, though, what matters is whether the team goes on to clinch the Ranji crown. “Obviously, what these guys did was incredible. I always knew that they could achieve such a feat if they play to their potential.

“But more than records, what counts is whether we win the title, because that’s our ultimate goal. Our job is far from over,” Lal told The Telegraph late on Wednesday evening.