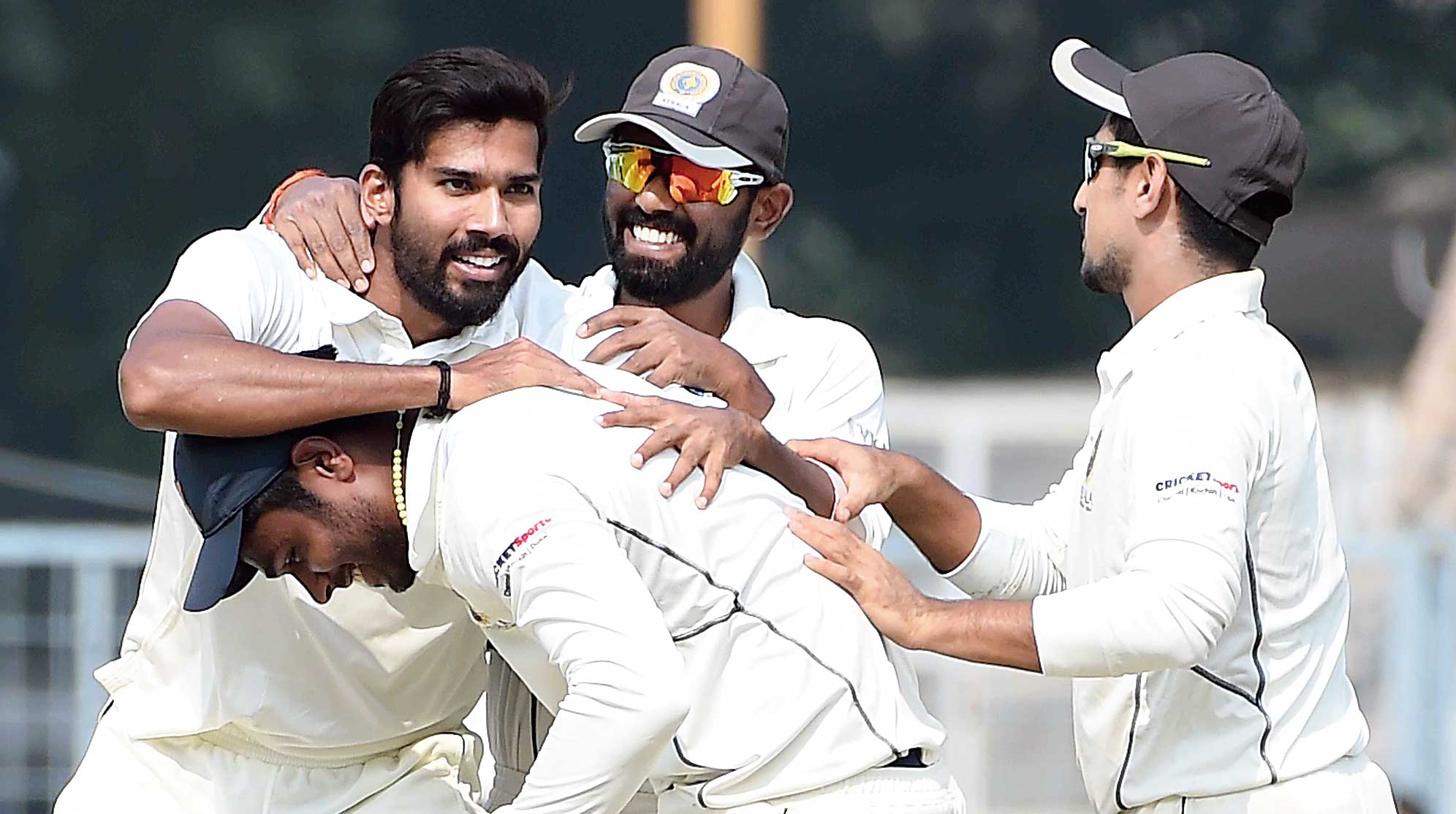 Sandeep Warrier celebrates with teammates after the fall of a Bengal wicket, at the Eden on Thursday.
Telegraph picture
A Staff Reporter   |   Calcutta   |   Published 22.11.18, 09:54 PM

Kerala had a Warrier, but Bengal had no warriors to tackle him.

That is perhaps an apt way to sum up the Bengal versus Kerala Ranji Trophy Elite Group B match at the Eden, which concluded on Thursday. Precisely, it concluded in an embarrassing nine-wicket defeat for the home team.

Kerala’s 27-year-old right-arm pacer Sandeep Warrier took five for 33 as Bengal were bundled out for 184 in their second innings. Set a target of 41 to win, Kerala completed the job in 11 overs. They would, however, regret losing the wicket of first-innings centurion Jalaj Saxena (26) as that robbed them of the bonus point.

There is no shame in defeat, but surely there are better ways to lose than how Bengal surrendered.

Sessions with a master like VVS Laxman, a mentor as capable as Arun Lal and the best of facilities don’t seem to be enough to help the Bengal players shred their cloak of mediocrity and show their potential.

Bengal captain Manoj Tiwary, who was the only one in the team who had the stomach to fight back on Thursday, spoke about the batsmen possibly suffering from “a fear of dismissal.” But then what about the pre-season mental conditioning sessions which were arranged by the Cricket Association of Bengal (CAB), where the players were supposed to sort out their ‘fears’ with a sports psychologist?

One could argue that Bengal are placed second in the Group B standings after three matches, but with three away fixtures ahead — against Tamil Nadu, Hyderabad and Andhra — the road to next round for Tiwary’s boys seems to be a steep climb from hereon.

In their last match at the Eden, against an ordinary Madhya Pradesh, there was a tone of regret in the Bengal camp that the batting-friendly wicket made it difficult for their bowlers to enforce an outright victory. The match was drawn. In this match, they were provided a bowler-friendly track, but the result turned out to be even worse.

When Bengal fell for 147 on the opening day, losing the toss and the moisture in the pitch were cited as reasons for the debacle. When Kerala batted better than Bengal on the second day to total 291, it was said that the wicket had eased out.

So, by that logic, batting on Day III should have been easier for the Bengal batsmen. But that didn’t happen.

There was hope that Bengal, conceding a 144-run first innings lead, would do better in their second essay. Resuming the innings at five for one, Bengal were in trouble early when opener Abhishek Raman was dismissed.

That’s when Tiwary (62) joined Sudip Chatterjee (39) at the crease. Tiwary looked to be in sublime touch and took the fight back to the Kerala camp, slamming four boundaries off the first five balls he faced.

Completing his fifty off just 52 balls, Tiwary was looking set for a match-changing innings when a lapse in concentration, after being denied a single by partner Sudip, allowed Warrier to breach the Bengal captain’s defence. That was the beginning of the end. The batsmen thereafter came and went like in a fashion parade. None of the remaining batsmen could stand up to Warrier’s tireless and devastating spells of fast bowling that brought about Bengal’s failure.

But failure is probably an understatement.