At stumps, Shakib-al Hasan was batting on 23 with Taijul Islam yet to open his account 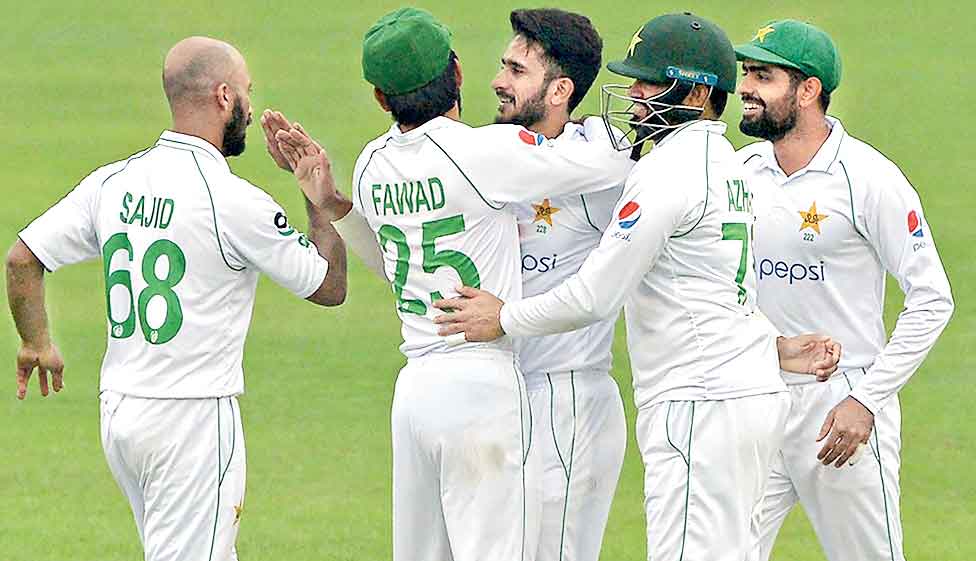 Sajid Khan (left) celebrates one of his six wickets with teammates on the fourth day of the second Test against Bangladesh in Dhaka.
Twitter
Agencies   |   Dhaka   |   Published 08.12.21, 02:25 AM

Off-spinner Sajid Khan claimed a career-best 6/35 as Pakistan reduced Bangladesh to 76/7 and raised hopes of a result in the second and final Test on Tuesday.

After rain had washed out the third day’s play, Pakistan resumed the fourth day on 188/2 and declared at 300/4 after lunch.

Then spinners Sajid and Nauman Ali got to work until stumps was called an hour early because of bad light with Bangladesh trailing by 224 runs and still needing 25 runs to avoid follow-on.

“After declaration, our target was to give us the best chance to win the game and attack relentlessly and that’s what we did,” Sajid said. “Fortunately, there was turn and bounce aplenty. We two spinners bowled in partnership. We will try to get the three wickets tomorrow (Wednesday) and force them to bat again and win the game.”

At stumps, Shakib-al Hasan was batting on 23 with Taijul Islam yet to open his account.

wickets in an innings.

Sajid got all the wickets except that of skipper Mominul Haque, who was run out for 1 by a direct hit from Hasan Ali at point. The Bangladesh batters also invited trouble by playing rash shots.

“The wicket was difficult and here we understand a defensive mindset won’t work,” said Najmul Hosain, who top-scored for the side with 30.

“So our plan was to score runs quickly but unfortunately the execution was not good,” he added. Opener Mahmudul Hasan Joy got a duck on debut after poking at a flighted delivery to slip, and his opening partner Shadman Islam was baffled by extra bounce. With Mominul run out, Bangladesh went to tea at 22-3.