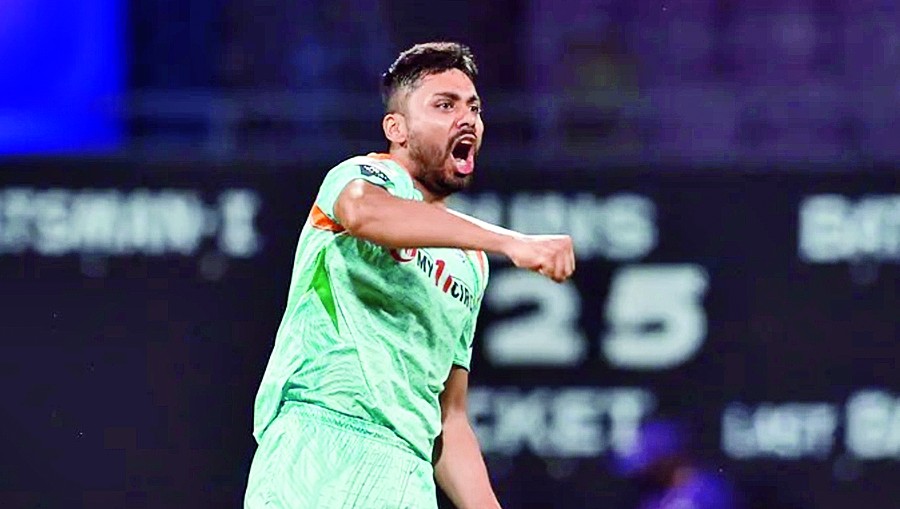 Young pacer Avesh Khan feels his key to success so far in this IPL lies in how well he has handled pressure situations.

The 25-year-old from Madhya Pradesh, who was roped in by Lucknow Super Giants for Rs 10 crore from a base price of Rs 20 lakh during this year’s auction, took four wickets in Monday’s game versus Sunrisers Hyderabad at the DY Patil Stadium in Navi Mumbai.

He played a vital role in the newcomers’ 12-run win.

After dismissing Kane Williamson and his opening partner Abhishek Sharma early on, Avesh returned for his last spell to account for a set Nicholas Pooran and Abdul Samad off successive balls in the 18th over of the Sunrisers’ run chase.

That turned out to be the game changer.

“In the IPL, there will be pressure on you in every match if you are a bowler, but how you handle that is very important,” Avesh said at the post-match news conference, after finishing with figures of 4/24 off his four overs.

There was quite a bit of pressure on Avesh when he came on to bowl that 18th over with the Sunrisers needing 33 more for victory. Pooran, looking dangerous, slammed him for a six off the very first ball, with the equation then being 27 runs off 17 balls.

But Avesh was quick to alter his length. He tried to pitch it up and bowl the yorker length.

The ploy worked and Avesh was able to send Pooran back, although it was an awkward height full toss that helped him get the better of the West Indies wicketkeeper-batsman.

Avesh, though, had done his job of giving Lucknow the upper hand.

“I still had five balls to bowl,” Avesh said, speaking of that over. “I thought I had to focus on executing them. I thought I would bowl just the yorkers then. It worked,” he added.

“I always try to take wickets for the team. That’s where I keep focusing on,” he made it clear. “If I start thinking that I am the main bowler, I will take pressure upon myself, which is unnecessary.”

Elaborating on his mindset, Avesh, who has picked up seven wickets from three matches in this IPL, added: “Look, I am very happy to contribute to my team’s cause. And I’m happier if my team secures a win.

“In the first match (versus fellow newcomers Gujarat Titans), I got an opportunity to save 11 runs in one over, which I couldn’t. In this game, I was focused on taking wickets and that mindset pulled me through.”