West Indian all-rounder scores 49 not out, then picks up 3 crucial wickets to ensure the Knights stay in the hunt 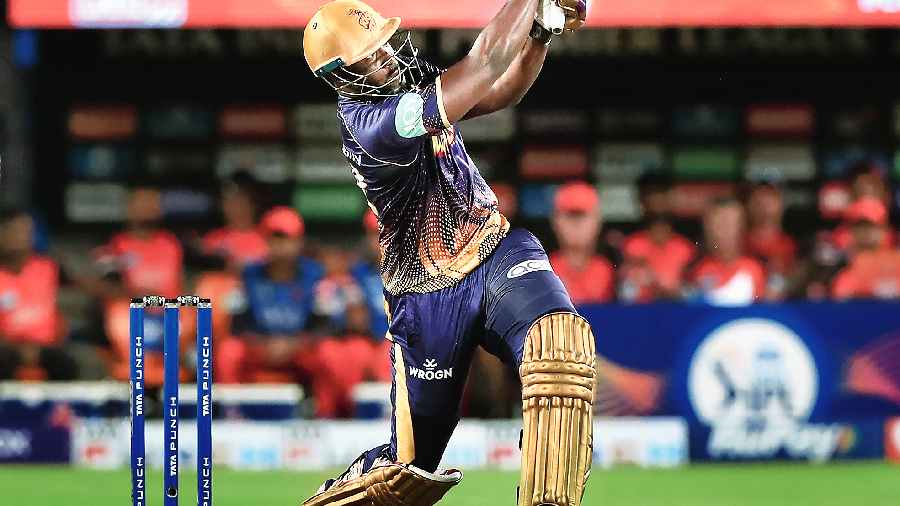 Man of the Match Andre Russell of Kolkata Knight Riders during his unbeaten 49 off 28 balls against Sunrisers Hyderabad at the MCA Stadium in Pune on Saturday.
PTI
Sayak Banerjee   |   Published 15.05.22, 12:59 AM

Kolkata Knight Riders (KKR) had almost again made a hash of a sound start provided by their top-order batsmen versus Sunrisers Hyderabad at the MCA Stadium in Pune on Saturday.

However, Sam Billings (34) and Andre Russell’s (49 not out) sensible batting during their 63-run stand for the sixth wicket guided the Knights to 177 for 6, which certainly was a challenging total.

Riding on that late momentum provided by Billings and Russell, the bowlers then delivered, restricting Sunrisers to 123 for 8 as the Knight Riders recorded a 54-run victory which will keep their playoff hopes afloat. Importantly, their net run-rate is now in the positive (0.16).

For the Sunrisers, this was their fifth straight defeat which severely dented their prospects of making the last four.

Precisely, it was Russell’s onslaught against off-spinner Washington Sundar in the

innings’ final over that propelled the Knight Riders to a 170-plus total. Handing the ball over to a spinner, that too someone who last played a game almost a fortnight ago, was a big risk in the first place which Sunrisers captain Kane Williamson took.

And Sundar gave away as many as 20 in that over.

He dished out three full tosses to Russell, who sent each one of them into the stands for six.

Russell then had the best figures with the ball too, taking three wickets, including that of big fish Williamson. Tim Southee also contributed, striking twice.

The Knights’ decision to bat first after winning the toss  wasn’t an injudicious one. With the pitches wearing out, batting second hasn’t been all too easy as some of the recent matches have shown.

Opener Ajinkya Rahane and Nitish Rana, coming in at No.3, helped the Knights progress after they lost Venkatesh Iyer early off Marco Jansen’s bowling. Courtesy Rahane and Rana, KKR had done well to reach 63 for 1 after seven overs. But all of a sudden, they slipped to 94 for 5 in the 12th over.

Going wicketless in the last three games, Umran (3/33) made crucial strikes which threatened to dent the Knights’ progress.

The way he dismissed Shreyas for the second time in this IPL was well thought out. Shreyas seemed to be expecting a short-pitched ball but Umran pitched it up and made Shreyas play an ambitious shot to hole out in the deep.