KKR make mockery of the 138-run target, winning by six wickets with 33 balls to spare 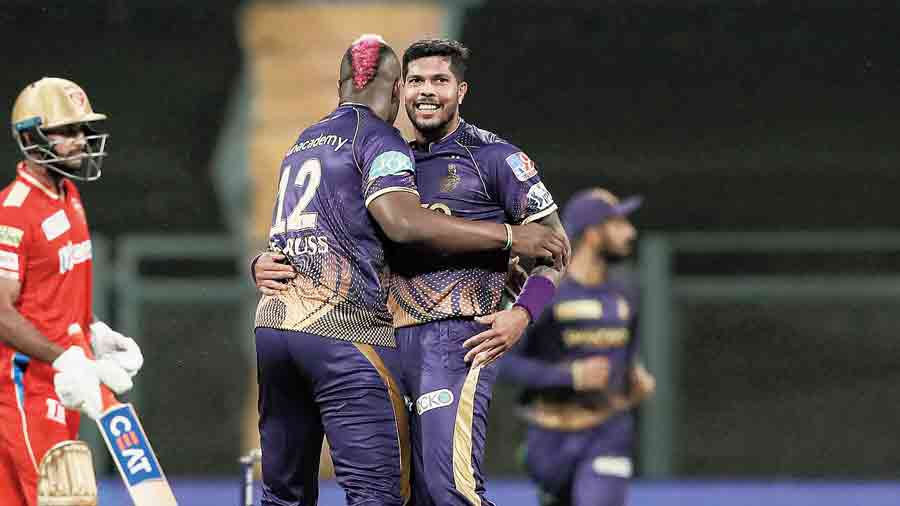 Andre Russell turned tormentor at the Wankhede in Mumbai on Friday evening. Eight sixes off 31 balls along with two fours en route to his unbeaten 70 provided the impetus as Kolkata Knight Riders made mockery of the 138-run target, winning by six wickets with 33 balls to spare.

The Knights had been reduced to a precarious 51/4 in the seventh over and it seemed Punjab Kings were poised to make a dramatic turnaround. But Russell was at his destructive best, tearing the attack to shreds. There was very little the bowlers could do, save watch in distress.

Sam Billings contributed 24 during their unbroken 90-run partnership, and was content mainly with rotating the strike.

The brutal force with which Russell dismissed the Rahul Chahar threat made one sit back and watch in awe. He also won the battle against fellow Jamaican Odean Smith. It included 30 runs in the 12th over that virtually sealed the match for the Knights.

It was Umesh Yadav who crippled the Punjab Kings batsmen at the start. Umesh maintained his tradition of striking early in the Powerplay overs. Bowling at an appreciable pace, he extracted good bounce and carry from the wickets besides managing to swing the ball consistently.

The fast bowler provided the perfect breakthrough in the first over, removing Mayank Agarwal. The Punjab Kings captain had to play the outswinger which pitched in the zone and swung.

He struck again when Shreyas Iyer got him to bowl the ninth over. Liam Livingstone paid the price for his over-ambitious ways.

Once Punjab were reeling at 92/6, Shreyas again turned to Umesh to deliver the knock-out punch. He didn’t disappoint in his final over, first cleaning up Harpreet Brar with an off-cutter and then getting Chahar caught while defending a short ball awkwardly.

Punjab Kings’ batting debacle reminded of the way the Knights faltered against RCB in their last game. The pressure to put up a daunting total upon losing the toss forced the batters to commit mistakes in the face of a disciplined attack.