Act of a rational cricketer aware of the laws

Critics are accusing Deepti Sharma of sharp practice, of behaviour that is technically within the law but borders on the unethical 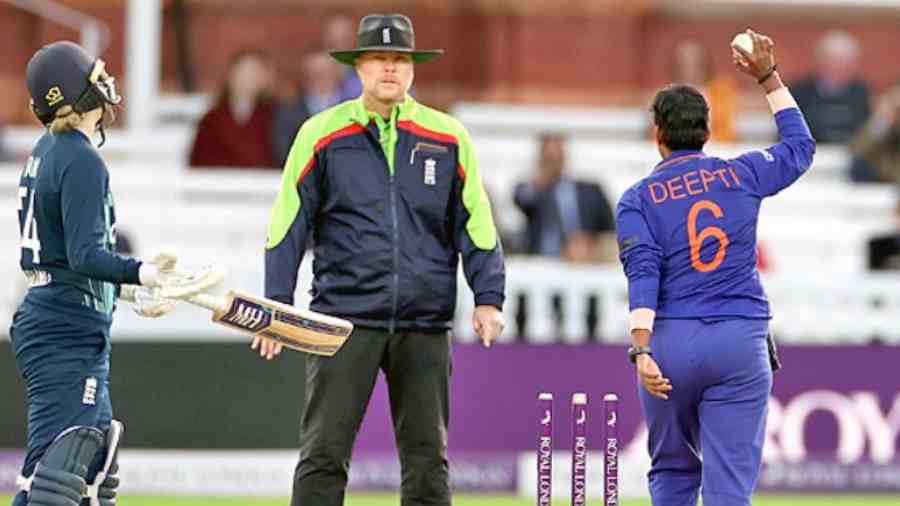 Deepti Sharma of India runs out Charlie Dean of England to claim victory during the third ODI at Lord’s on Saturday.
Getty Images
Mukul Kesavan   |   Published 26.09.22, 03:26 AM

Deepti Sharma’s run out of Charlotte Dean at the bowler’s end was within the laws of cricket. The MCC has recently removed the relevant law from the section under unfair play and reclassified it as a routine run-out to underline its legitimacy.

If the batter tries to steal ground and move out of the crease before the bowler has delivered the ball, the bowler can either throw the stumps down or break them with the hand holding the ball and claim a run out. Her critics aren’t accusing Sharma of illegality. They can’t: the umpires gave Dean out. They are accusing her of sharp practice, of behaviour that is technically within the law but borders on the unethical.

They use two arguments to back up this claim. The first is the convention which requires the bowler to warn the batter at least once before running her out. This is easily dealt with. The batter isn’t an absent-minded infant and the bowler isn’t her nanny.

The Laws of Cricket constitute the game; every player on the pitch is expected to know them. It’s no part of the bowler’s brief to act as prompter. The second, more substantial allegation of sharp practice is that Sharma weaponized the law by pulling out of her delivery stride at the last moment, at a moment when the batter might reasonably assume that she was irrevocably into her bowling action.

The suggestion is that it’s okay for the batter to take a start at that point which takes her beyond the crease.  These critics have cited a photo of Sharma rocking back just as her back leg lands, to suggest that because Dean’s bat is inside the crease at that moment, Sharma was past some legal point of no return and therefore her act of pulling out of her bowling action and breaking the stumps was ‘unsporting’ and wrong.

The position of Dean’s bat in that frame is immaterial. She is out because in the moments after, she wandered out of her ground without waiting for Sharma’s bowling arm to swing into its action, at which point she “...would normally have been expected to release the ball...”

Even if we allow the fuzzy category of sharp practice, Sharma doesn’t come close to stretching the law. If we had a frame that showed Sharma’s bowling arm vertical, her weight committed to her front foot, her leading arm by her side, and she then chose to pull out of her action, there might be a case for arguing that she was breaching a reasonable expectation of the moment of release.

In such a case, breaking the stumps with the batter out of the crease might not result in dismissal. But that isn’t what happened at Lord’s on Saturday.  The real problem with Law 41.16 is not its framing but the MCC’s mixed messaging when it is implemented. In 2019, during an IPL match between Punjab Kings and Rajasthan Royals, Ravichandran Ashwin ran out Jos Buttler at the bowler’s end.

The MCC subsequently released a statement saying “we believe the pause was too long between the time Ashwin reached the crease and the moment it was reasonable to expect the ball would be delivered. When Buttler could have reasonably expected the ball to be delivered, he was in his ground.”

This is a cricketing contest not a medieval pageant where the sweating serf with the ball has to be solicitous of the armoured knight with the bat. Deepti Sharma is a rational cricketer, literate in the laws of the game. Her spirit-of-cricket critics, on the other hand, believe in ghosts.