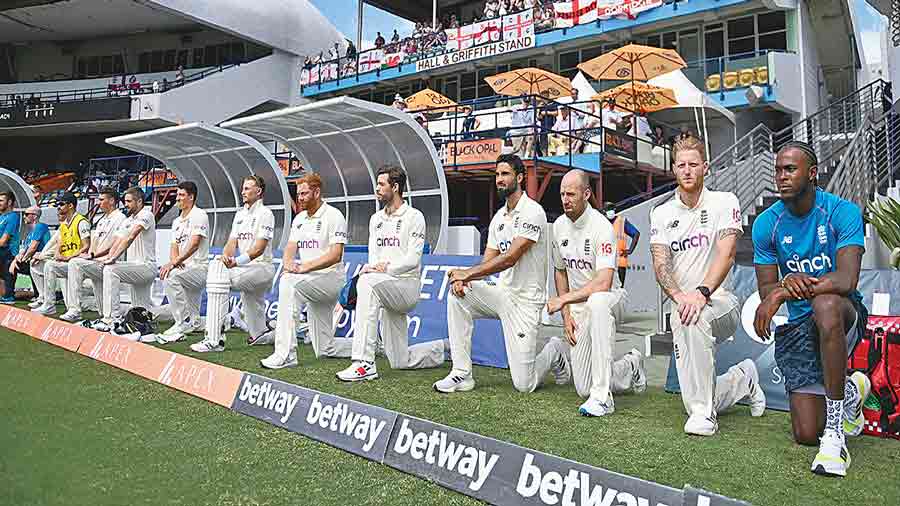 England players take the knee ahead of Day I of the second Test at Kensington Oval in Bridgetown, Barbados, on Wednesday.
Getty Images
Reuters   |   Bridgetown   |   Published 17.03.22, 02:56 AM

Jayden Seales took a wicket in his second over but England otherwise survived the first session unscathed to reach 47 for one at lunch on Day I of the second Test against the West Indies in Barbados on Wednesday.

Fast bowler Seales removed England opener Zak Crawley for a seven-ball duck, coaxing the 24-year-old into getting a faint edge on a rising delivery, which was caught by wicketkeeper Joshua Da Silva.

Alex Lees (16) and Joe Root (31) were at the crease at the end of the first session after England won the toss at the Kensington Oval.

West Indies bowled well to keep the scoring rate in check on a placid wicket, but will rue a missed opportunity to send Root back to the dressing room.

The England captain benefited from a huge slice of luck on 23, when a Jason Holder delivery appeared to nick his bat and carry into Da Silva’s hands, but West Indies, who had earlier wasted a review, decided against another one. The opening Test in North Sound, Antigua, ended in a draw.