According to Rule 14 (8) ofthe BCCI’s constitution whichdeals with the governance ofthe apex council, “no Councillor, once elected, shall holdany office in a Full MemberAssociation 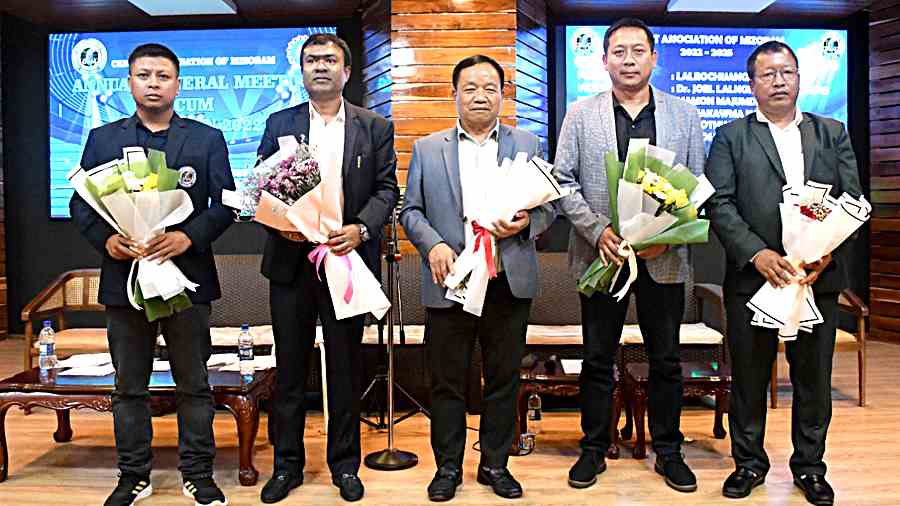 Cricket Association of Mizoram secretary Mamon Majumdar (second from left) with other office-bearers after its AGM in Aizawl on November 5
Indranil Majumdar   |   Kolkata   |   Published 07.12.22, 07:29 AM

The constitution of the Board of Control for Cricket in India (BCCI) clearly mandates ‘one person, one post’ for its functionaries but the rule doesn’t seem to apply to a certain official.

Mamon Majumdar, a member of the BCCI’s apex council, continues to function as the secretary of the Cricket Association of Mizoram (CAM). According to a picture uploaded on CAM’s website, Majumdar retained his secretary’s post in the association following its AGM on November 5.

Majumdar was a member of the IPL governing council when Sourav Ganguly was the president but continued to function as CAM’s secretary. Efforts to contact Majumdar proved futile as he didn’t respond to calls and WhatsApp messages from The Telegraph.

Lalrochuanga Pachuau, the president of the association, said he was not authorised to speak and did not hold any position. “Please speak to the secretary,” Pachuau said.

According to Rule 14 (8) of the BCCI’s constitution which deals with the governance of the apex council, “no Councillor, once elected, shall hold any office in a Full Member Association. The Full Member shall take steps to fill up the vacancy so created immediately.”

Mukesh Kumar continued with his impressive showing in first-class cricket with career-best figures of 6/40 as India A dismissed Bangladesh A for 252 on Day 1 of the second four-day game at the Sylhet International Stadium.

Mukesh has been a consistent performer for India A since his debut in the home series against New Zealand A, getting a five-for even then.

The Bengal seamer got good support from senior pacer Umesh Yadav (2/55), who warmed up nicely for the two-Test series. Off-spinner Jayant Yadav  also took two wickets. For Bangladesh A, Shahadat Hossain top-scored with 80. At stumps, India A were 11 for no loss.