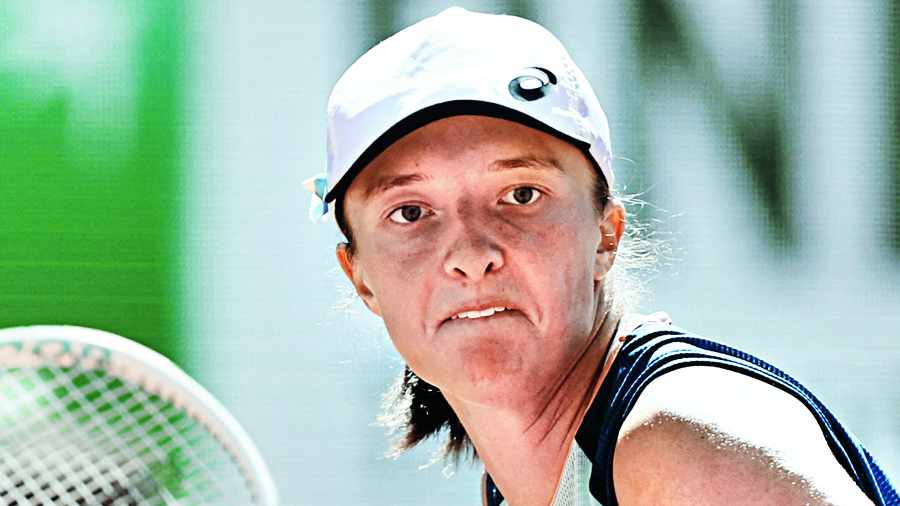 Iga Swiatek during her semi-final match against Russia’s Daria Kasatkina on Thursday.
Twitter
The Telegraph   |   Published 04.06.22, 01:29 AM

Iga Swiatek may be one of the most soft-spoken and humble players on the women’s circuit but she can be lethal on court. And she often shuts out the world before a match with hard rock, zoning into the moment.

Swiatek is one step away from a second French Open title in three years but the world No.1 will face a unique challenge on Saturday in teenager Coco Gauff in a tournament that has often proved unpredictable.

The world No.1 Pole crushed Daria Kasatkina 6-2, 6-1 on Thursday to stretch her winning run to 34 matches and breeze into the final, having arrived at Roland Garros as the overwhelming favourite.

Swiatek routinely arrives on court wearing headphones, drowning out the voices in her head and outside with thumping rock music. “There are a few bands that I listen to before a match,” a beaming Swiatek told reporters. “Led Zeppelin, AC/DC and Guns N’ Roses, they were always the three that were really kind of perfect for the situation.

“So I use music to kind of have something that’s going to get my brain busy and relaxed before the match.”

That may help her find her rhythm against the 18-year-old Gauff, who has developed into a solid clay court player.

It is the American’s first grand slam final, but the 18th seed insists she will go into the contest without any pressure. She has had a taste of a final at Roland Garros, having won the juniors title in 2018.

In the semi-final, she too had a rather easy outing against the unseeded Martina Trevisan 6-3, 6-1.

Swiatek is on a remarkable 34-match winning streak and should the 2020 Roland Garros champion lift the Suzanne Lenglen Cup again, she will match Venus Williams’ run from 2000 — the longest on the women’s tour in the 2000s.

She has a unique game, with her light footwork, powerful forehand and unsettling slice proving a nightmare to handle as her opponents during this fortnight have realised. Swiatek has dropped only one set, against Qinwen Zheng in the fourth round, on way to the summit clash.

Nerves have often been a deciding factor in grand slam finals but there is little chance that Swiatek, who has been working with a psychologist, will struggle with her composure.

“I’m just trying to treat these (final) matches as any other match, because it is stressful, and I accept that. But I want to keep doing the same work,” she said.

Gauff, who had lost her two previous encounters with Swiatek in straight sets, said: “I think going in I have nothing to lose and she’s definitely the favourite on paper.

“I’m just going to play free and play my best tennis. I think in a grand slam final anything can happen.”

Chris Evert, an 18-time grand slam champion, believes Gauff is one of the rare players who can derail Swiatek.