Dedication, discipline and, of course, teamwork won us the title: coach Sourashish Lahiri 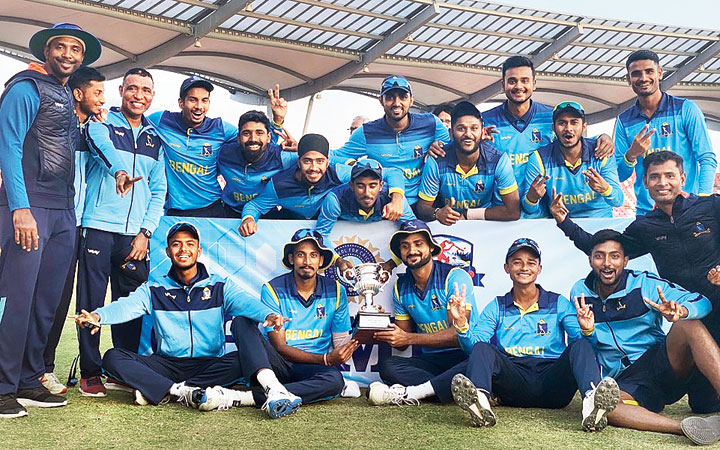 Bengal emerged champions of the National U-23 One-Day tournament, defeating Gujarat in the final by 64 runs in Dehra Dun on Sunday.

Gharami, likely to be called up for the senior team’s nets along with captain Kazi Junaid Saifi, finished with 534 runs in the tournament. No wonder these young players accomplished what their seniors haven’t been able to.

Gujarat, in reply, got off to a solid start as they reached 107 without loss. But left-arm spinner Ankit Mishra (3/43) came up with crucial strikes that dented Gujarat’s progress, before Pradipta Pramanik (3/53) helped Bengal take complete control of the game.

Gujarat were eventually all out for 193 with 35 balls to spare.

“Dedication, discipline and, of course, teamwork won us the title,” an elated coach Sourashish Lahiri told The Telegraph.

“And yes, the never-say-die attitude and the grit to fight till the very last ball are also a hallmark of this team’s success. Even in today’s final, our opponents were 100-odd without loss and the going was really, really tough from there. But these youngsters were unflustered and even someone like Ankit, playing just his second match, helped us regain the momentum with his strikes

“Hats off to these guys for overcoming all hurdles coming our way… Just shows the character of this side,” Lahiri added. Cricket Association of Bengal (CAB) secretary Avishek Dalmiya announced a reward of Rs 50,000 for each member of the team.