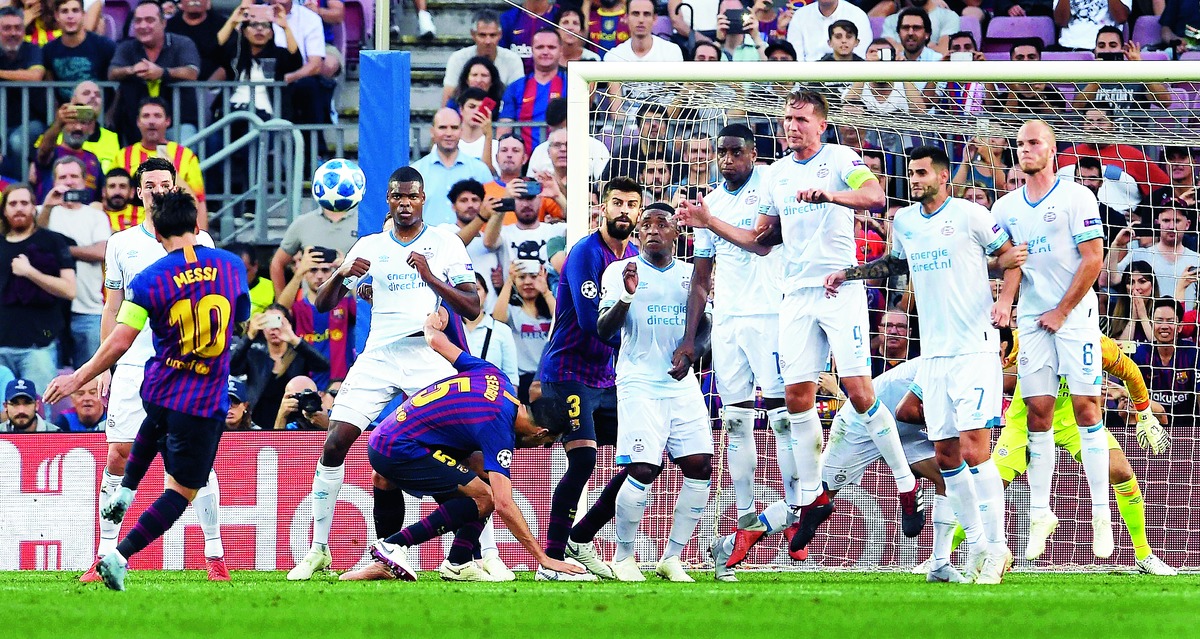 Barcelona: Lionel Messi scored a sensational hat-trick as Barcelona kick-started their Champions League campaign with a 4-0 win at home to Dutch champions PSV Eindhoven on Tuesday, although they had defender Samuel Umtiti sent off in the second half.

Barca's all-time top scorer Messi broke the deadlock in the 32nd minute at the Nou Camp with an immaculately struck free kick, curling the ball over the wall and right into the top near corner.

It was his second free kick goal in three home games this season. Coached by former Barca and Netherlands midfielder Mark van Bommel, PSV had produced an admirable performance in their first visit to the Nou Camp in 21 years until they began to tire late in the second half.

In the first period they successfully shut down most of Barca's attacks and also plotted several dangerous breaks, which led to Mexico international Hirving Lozano firing narrowly over the bar after the interval.

The Spanish champions began to demonstrate the gulf in class as the second half progressed and they doubled their lead in the 75th minute through a lovely curling strike from in-form French forward Ousmane Dembele, who scored a fifth goal from sixth games in all competitions this season.

Messi got his second and Barca's third goal two minutes later, turning Ivan Rakitic's dinked pass into the near corner with one flick of his boot and then completed his treble in the 87th by receiving another chipped pass, this time from Luis Suarez, and ruthlessly smashing home.

The mood was briefly dampened when France defender Umtiti was dismissed in the 79th minute for a second yellow card, ruling him out of Barca's next Champions League game away to Tottenham Hotspur on October 3.

Meanwhile, Inter Milan struck twice late on to secure a stunning 2-1 victory over a crestfallen Tottenham Hotspur in their Group B opener at the San Siro on Tuesday.

Mauro Icardi's superb volley levelled the scores in the 86th minute and Matias Vecino headed a stoppage-time winner to give Inter a victory that for most of the night looked unlikely.

Spurs had taken the lead in the 53rd minute with Christian Eriksen's deflected effort off Inter's Miranda and looked comfortable as the full-time whistle approached.

The match was turned on its head in dramatic fashion as Tottenham suffered a third straight loss in all competitions. Inter are level on three points with Barcelona. Reuters