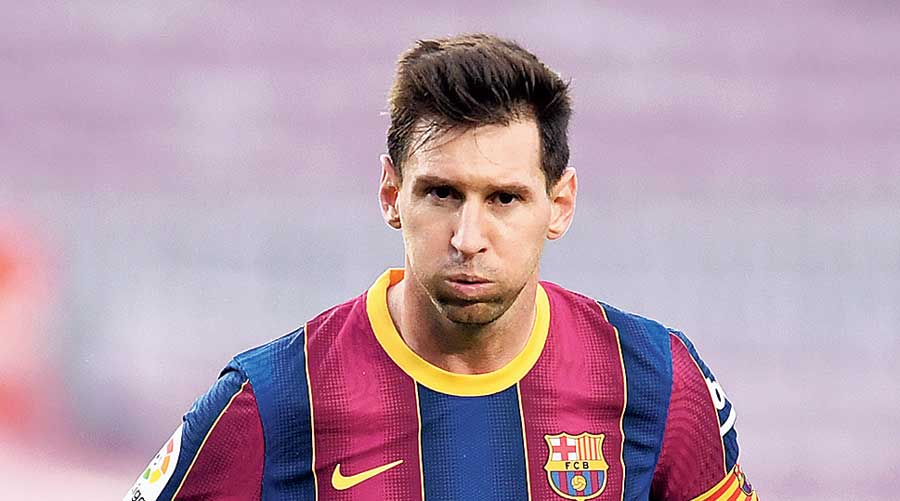 Both the club, which has suffered steep losses recently, and 34-year-old Messi had wanted to sign a new contract. But the Argentine’s deal would have taken salaries to 110 per cent of the club’s earnings, a financially risky move given the impact of the Covid-19 pandemic, Laporta said.

“The club is above everything — even above the best player in the world,” Laporta told a news conference.

“We reached (an) agreement but couldn’t formalise it, because of the club’s economic situation, which means we can’t register the player due to salary limits,” he said.

Without Messi’s wages, salaries would account for 95 per cent of Barcelona’s income, while ideally, they should not exceed 70 per cent, “so there’s still a lot of work to be done”, Laporta said.

Messi had wanted to sign a new contract at Barcelona on reduced terms, reportedly 50 per cent below his latest pay, but the club was unable to come up with an arrangement that also complied with La Liga’s Financial Fair Play (FFP) rules.

Messi’s last contract, signed in 2017, was the most lucrative in world sport according to a January report in the Spanish newspaper El Mundo. Forbes has listed him as the athlete with the world’s second-highest earnings in 2021, at $130 million.

Still, some observers believe that the announcement of Messi’s departure is actually Barca boldly calling La Liga’s bluff over its financial rules.

They believe that pressure from Barcelona might force the authorities to buckle, offer the club a workaround, make an exception just this time, as they have done all the other times that either Barcelona or its twin, repelling pole, Real Madrid, is in trouble. Perhaps Messi will stay, again.

Laporta said the club had lined up two new deals with Messi, firstly a two-year

deal made payable over five years, and then a separate five-year deal, but could not get either deal done because of La Liga’s rules.

Messi’s father and agent Jorge Messi did not reply to requests for comment.

Laporta said they would have been able to get Messi’s new deal over the line if they had agreed to La Liga’s proposed 2.7 billion euro injection from private equity firm CVC, adding, however, that he was not willing to gamble on that for the short-term gain.

“In order to meet FFP, Barca had to agree to an operation, essentially re-mortgaging the club, which would affect us for the next 50 years in terms of TV rights, and I had to make the decision,” he said.

La Liga president Javier Tebas wrote on Twitter, however, that the CVC deal would not mortgage Barca’s TV rights for 50 years. “What it does is ensure they are more valuable for all clubs ... Or so you understood it a few hours ago,” he wrote.

Laporta said the club considered CVC’s investment well below what 10 per cent of La Liga was worth.

“We won’t make short-term decisions that could harm us in the long run,” Laporta said, adding that the coronavirus-impacted 2020-21 season’s financial losses, now put at around 400 million euros, would be double of what had been expected.

“We need to move on. We won’t just try to meet FFP criteria by putting the club at risk for the next 50 years,” he told reporters.

Messi, a six-time Ballon d’Or winner and Barca’s all-time top scorer, technically ended his 21-year association with the club at the end of June and is currently a free agent.

The Argentine’s next move remains unclear and for now he remains without a club.

He has long been linked with a move to Manchester City, where he would be reunited with his former Barcelona boss Pep Guardiola or Paris Saint-Germain.

PSG manager Mauricio Pochettino told reporters on Friday that Messi is an “option” that is being evaluated by the club, without elaborating.

Guardiola said the Premier League champions had no plans to make a move for Messi.

“Right now it’s not in our thoughts,” he said.