Claims a taxing win over the French-born Maxime Cressy 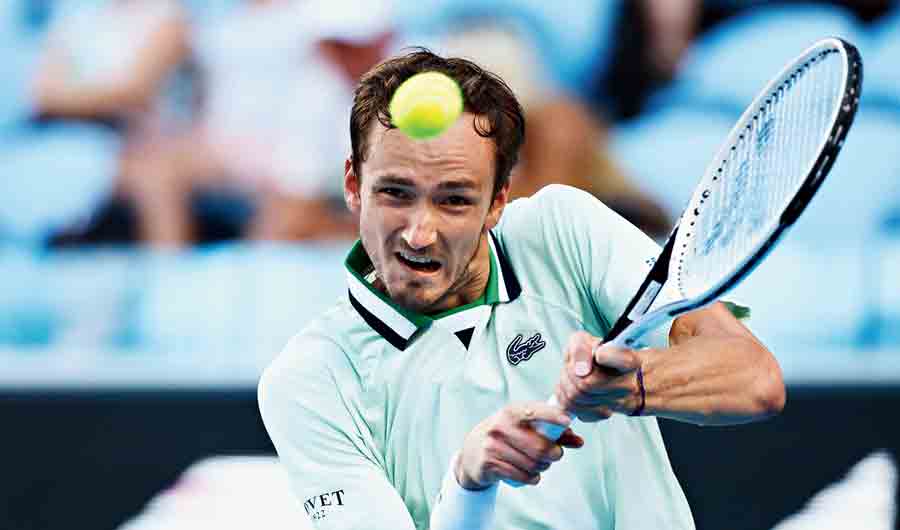 Daniil Medvedev admitted to playing mind games in a bid to knock Maxime Cressy off his stride after the American serve-volleyer proved hard to beat in a stifling fourth round clash at the Australian Open on Monday.

In oppressive heat at Margaret Court Arena, Medvedev claimed a taxing 6-2, 7-6 (4), 6-7 (4), 7-5 win over the French-born Cressy but lost his cool after dropping the third set and began venting his frustration loudly.

The Russian second seed shouted “this is so boring” as Cressy held firm at 1-1 in the final set and later roared “this is my unluckiest day ever” when a shot hit the net-cord and dropped on his side.

“I was trying to get into his head so maybe he changed his tactics,” Medvedev told broadcaster Eurosport of his histrionics.

Medvedev saw eight successive break points slip through his fingers in the final set until finally taking Cressy’s serve in the 11th game. He slipped a forehand past Cressy on the ninth break point and then served out the match in a hurry to book a quarter-final berth against Canadian Felix Auger-Aliassime.

The rangy Russian is not shy of confrontation, having criticised sections of the home crowd after beating Nick Kyrgios earlier in the tournament, an echo of his long-running feud with fans at the 2019 US Open.

After dropping the third set against Cressy, Medvedev picked a fight with chair umpire Renaud Lichtenstein after apparently being refused a request to leave the court to freshen up.

He barked at the Frenchman that the American was allowed too much time between serves.

Fourth seed Stefanos Tsitsipas survived an attritional fourth-round battle with American Taylor Fritz, twice coming from a set behind to win 4-6, 6-4, 4-6, 6-3, 6-4 to reach the quarter finals.

At just past midnight on Rod Laver Arena the Greek ended Fritz’s resistance to set up a clash with Italian 11th seed Jannik Sinner when he will be seeking to reach the semi-finals here for the third time in his career.

Sinner raised the Italian flag high over Melbourne Park, knocking out home hope Alex de Minaur 7-6 (3), 6-3, 6-4 to join compatriot Matteo Berrettini in the quarters. Tsitsipas looked out of sorts and edgy at times but his greater experience on the big stages eventually told as he got the decisive break in the fifth set before claiming victory.

Fritz, playing in his first grand slam fourth round, converted only two of his 15 break points and will rue a missed opportunity to become the first American male to reach a grand slam quarter final for two years.

“It was an epic match, I gave everything out there today,” the 23-year-old said. Tsitsipas likened his victory to a game of chess after needing all his powers of concentration to outmanoeuvre the American. So focused on the moment was he that he sometimes got caught out by the shot clock before serving.