Danka Kovinic derails the British teenager's challenge in the second round 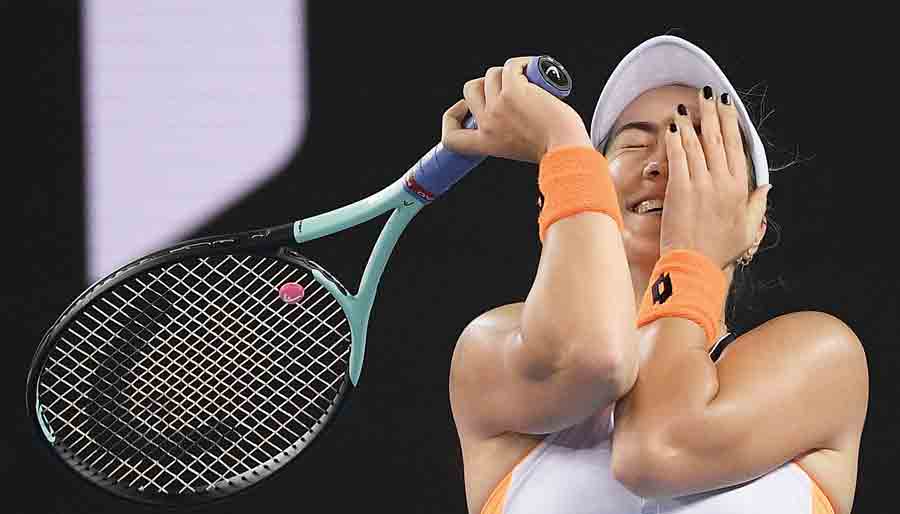 Thursday was a tough day for British tennis as both Emma Raducanu and Andy Murray failed to overcome their opponents at the Australian Open. Women’s third seed Garbine Muguruza and sixth seed Anett Kontaveit too crashed out.

British teenager Raducanu did not have all the solutions to a grand slam puzzle, unlike in the 2021 US Open, as a combination of a blistered racket hand and an inspired Danka Kovinic derailed her challenge here in the second round.

The 17th seed, who rocketed to fame by winning last year’s US Open as a qualifier without losing a set, gritted her teeth through the discomfort in a tense clash but fell 4-6, 6-4, 3-6.

Nineteen-year-old Raducanu, who beat former US Open champion Sloane Stephens in the first round to take her grand slam main draw record to an incredible 11-1 from three events, needed treatment after the fifth game of the first set.

With her hand taped she was unable to deliver her usual baseline power and resorted to slicing virtually every forehand. Incredibly she turned the shot of choice for many a club hacker into a weapon and at times the 98th-ranked Kovinic seemed at a loss to know how to handle it.

But the 27-year-old Montenegran showed great composure to dominate the deciding set and move into the third round of a grand slam for the first time in her career. Raducanu was still smiling as she congratulated her opponent at the net and while the loss will sting like her blistered hand for a while, she will look back with few regrets and will regard the match as part of her steep learning curve.

A bitterly disappointed Andy Murray was knocked out of the second round and said he might not be back next year if his results this season didn’t match up to his expectations. The 34-year-old Scot had high hopes of his return to Melbourne Park after an absence of two years but they were shattered by inspired Japanese qualifier Taro Daniel, world No. 120, 4-6, 4-6, 4-6.

“I’m really, really disappointed. Very frustrated. A tough loss for me, that’s for sure,” Murray said after the match.

A capacity 50 per cent crowd cheered on every Kyrgios point at a floodlit Rod Laver Arena but despite their fanatic support, the Australian maverick could not find a way past the US Open champion who showed nerves of steel. “I came to win this match and I am happy to do it,” said Medvedev. “It’s not easy when you get booed between the first and second serve. I had to stay calm.”

In the first clash between two former world No.1, Tsitsipas – a two-time Australian Open semi-finalist – dominated proceedings early on but the 21-year-old Baez, ranked 88th and making his grand slam debut, did show why he is rated highly.

“It wasn’t easy. I’m glad I overcame that obstacle today,” Tsitsipas said on court. “Lot’s of fighting, a little bit of swearing but glad to be in the third round.”

Wildcard entrant Chris O’Connell credited coach Marinko Matosevic for his run to the third round after the world No. 175 toppled 13th seed Diego Schwartzman 7-6 (8-6), 6-4.

Sydney-born O’Connell moved beyond the second round at a grand slam for the first time. “I’ve been working with Marinko. He’s just really confident with how I want to play tennis now. It’s the first time I’ve really had a one-on-one coach literally every day with me. Marinko was such a great player. All his knowledge of the game, he’s just putting it onto me,” he said.

World No.2 Aryna Sabalenka survived a complete service meltdown to rally for a 1-6, 6-4, 6-2 victory over Wang Xinyu and avoid joining an exodus of top women’s seeds.

Taking to court just after Muguruza and Kontaveit had crashed out of the second round, Sabalenka looked to be going the same way when she double-faulted six times in her opening service game.  Her 12th double fault handed Chinese world No. 100 Wang the opening set but even though the services errors continued, the Belarussian battled back in the contest on Rod Laver Arena.

Former Wimbledon champion Garbine Muguruza succumbed to a surprise second-round 3-6, 3-6 loss to France’s Alize Cornet. Cornet gave the Spanish number three seed little respite throughout her straight sets win to advance to the next round.

“I feel amazing and I think I played a great match out there today,” said Cornet. Estonian Kontaveit lost to Denmark’s Clara Tauson 2-6, 4-6.

Sania in second round

India’s Sania Mirza and her American partner Rajeev Ram moved into the mixed doubles second round with a confident straight-set win over the Serbian team of Aleksandra Krunic and Nikola Cacic.

Sania and Ram served powerfully in the 6-3, 7-6 (7-3) win in a match that lasted 69 minutes. Sania is set to retire after the 2022 season.Rohan Bopanna is also in fray in the mixed doubles  event. He has paired up with Croatia's Darija Jurak Schreiber.