Anustup Majumdar fights back for Bengal versus Odisha in Ranji Trophy 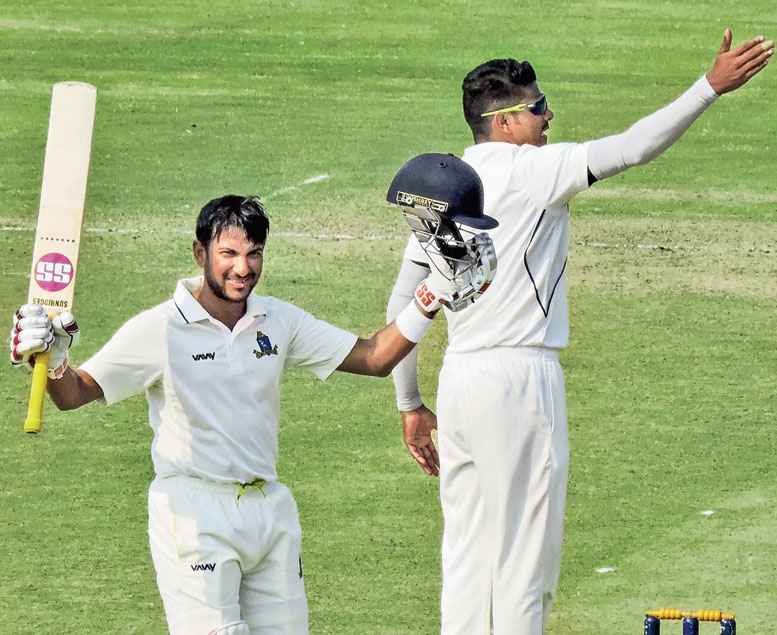 The top order failed yet again, but Anustup Majumdar and Shahbaz Ahmed’s recovery act put Bengal in control on the opening day of their Ranji Trophy quarter final versus Odisha at the DRIEMS ground at Tangi, Cuttack, on Thursday.

Anustup’s (136 batting) dogged, fluent knock and Shahbaz’s controlled, unbeaten 82 helped Bengal reach 308 for 6 at stumps. Together they added 167 in an unbroken partnership for the seventh wicket after Bengal were reeling at 141 for 6.

Anustup, however, didn’t want to go overboard with his effort as he’s well aware of the job at hand. “Conditions got easier after the first two sessions.

“We then treated the ball according to its merit and tried to take advantage whenever there was a run-scoring opportunity. We aren’t thinking of any particular total. We just want to get as many as we can from hereon,” Anustup told The Telegraph from Cuttack.

Things were worse, though, in the beginning when Bengal were struggling at 46 for 5 after Odisha won the toss and opted to bowl.

With half the side back in the hut and not even 50 on the board, Bengal were in danger of slipping deeper into a hole, till Anustup and Sreevats Goswami put up a resistance.

Anustup played the role of a senior pro to perfection, while Sreevats too showed a lot more responsibility, something he has been focusing on in this season.

But just as the partnership had blossomed, Sreevats was given out caught behind off Preet Singh Chohan’s bowling, a decision that appeared doubtful.

But thereafter the in-form Shahbaz’s confidence and batting with assurance helped Anustup stay relaxed and play his normal game.

“Shahbaz has been outstanding. It’s always easier if you have a batsman at the other end. The job obviously gets easier and we kept gaining momentum,” Anustup emphasised. The home team toiled after the initial success but it turned out to be a perfect batting strip as the day progressed.

Having missed the century mark by just one run against Delhi in a rain-interrupted match at Eden Gardens, Anustup elegantly swept Govind Poddar to the square leg boundary to reach his eighth hundred, his first since December 2017.

Incidentally, his last century (132 not out in second innings) too had come in a Ranji Trophy quarter final when Bengal got the better of Gujarat in 2017-18.

Earlier, Easwaran continued his miserable run and fell for seven to become the first casualty. Odisha pace spearhead Basant Mohanty, who is playing his 100th first-class match, dismissed Koushik Ghosh as both the Bengal openers were back in the dressing room inside seven overs.