Advertisement
Home / Science-tech / Want to be a podcaster? Justori is just the app you need

Want to be a podcaster? Justori is just the app you need 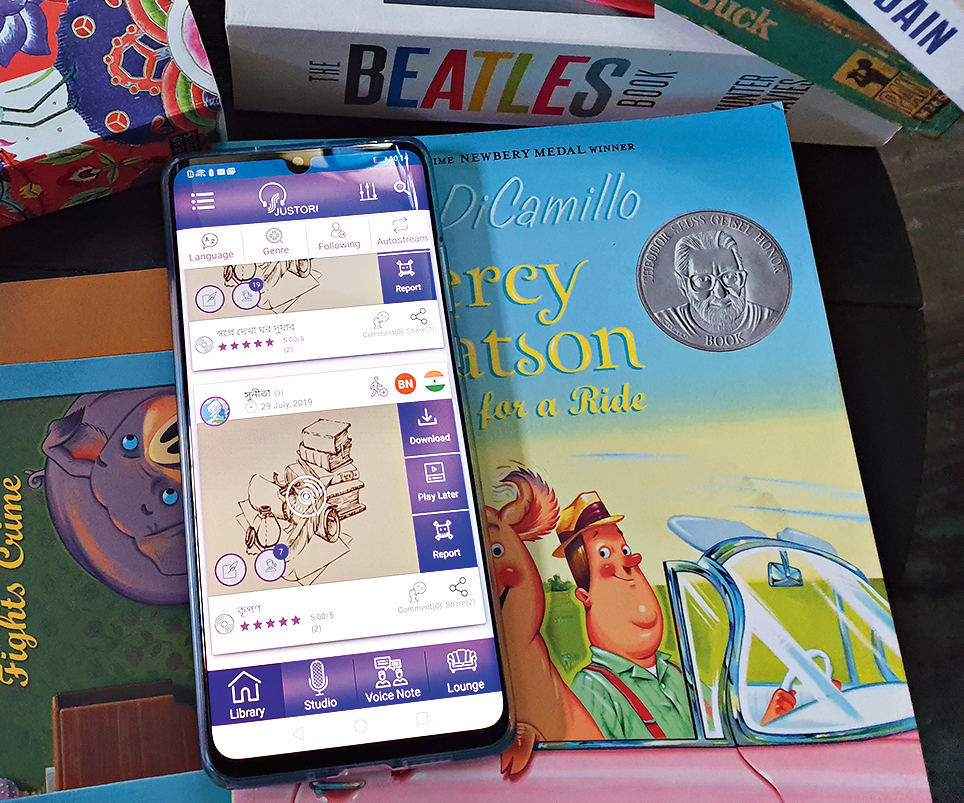 Think of Justori as Twitter but the messages are in the form of audio clips that can be at once aired and shared. And think of Justori as a version of YouTube where videos have been replaced by audio nuggets that can be edited and republished time and again.
(Pictures: The Telegraph)
Mathures Paul   |   Published 08.08.19, 12:35 PM

People ask me why I am turning my life upside down at 56. After all, to embark on a start-up my only advantage perhaps is the network that I have built over many decades. But a project like Justori can only work if one engages full-time,” Pratik Ghosh, the man behind the Android and iOS app Justori, tells t2 over a cup of Americano. The man has worked around the world as a business consultant and a banker. Giving up his three-decade-old comfortable life in Mauritius was a tough decision. He moved to France two years ago to give his new project wings.

Here’s more from the founder of Justori who grew up in Calcutta.

The idea came at the spur of a moment when I was travelling from Bangalore to Mauritius. On the way I had a stopover in Dubai at a friend’s place. Over the dinner, his son was fussing over a stuffed paratha. I asked Aarav what was wrong. Lo and behold, the paratha had become hard and I said it was so hard that it had become like Krishna’s Sudarshana Chakra. He wanted to know more and I started telling him a story. I suddenly realised that there was nothing like this... where anybody in the world can tell a story, which could marvel a total stranger in a different part of the world. I decided to begin the project and now it has been three years.

What makes it unique?

Justori is like a radio station in your palm. Without anybody’s assistance you can produce, direct, play an actor in the show or edit any voice-based programme, which can be memories of, say, your family members or a social cause or just a thought that one cannot share with people known to them. It is easy because narrations are usually unstructured and long. Here, you can record things by sections and you can go on adding sections. By doing so, you are totally free of any pressure of time or duration.

Since you are doing by sections, if you want to replace a section then do so. Some may say you can do this on YouTube. You can but neither with the ease nor with the flexibility of Justori. Here, you can go on changing and when you change and republish it, the URL remains the same. That’s what makes it really clever. You are keeping your tractions and ratings. You can go on publishing little bit at a time. Plus, you are not bound by the sequence of the recording. Like editing a film, you may record in any order and reorder them afterwards in a logical sequence. So Justori is designed to be a natural home for podcasting and not be a poor cousin on a primarily video platform like YouTube or even Facebook. Indeed you can share Justori on these platforms.


You can record things by sections and you can go on adding sections. If you want to replace a section then do so. Some may say you can do this on YouTube. You can but neither with the ease nor with the flexibility of Justori. Here, you can go on changing and when you change and republish it, the URL remains the same
- Pratik Ghosh, founder of Justori


The business model of Justori is developed to serve the two founding principles of it. First, freedom of speech. World over, freedom of speech — be it for individual or media — is faced with numerous new challenges. On Justori, voice is supreme and messages cannot be glossed-up by images. By shunning advertisement and not trading on data, Justori ensures freedom of speech by being completely independent. Second, democratisation of voice. On Justori, from aspiring writers to voice talents, from inspirational speakers to trainers, everyone can build up their follower-ship without having to be blessed by gatekeepers.

Also, I feel that there is a need for greater empathy in our societies. From immigrants to security forces, everybody has their stories that need to be easily told and heard. Justori makes it very easy for podcasters. If you want to be a podcaster, there are many challenges: Getting a proper set-up, where do you put those podcasts? There is no aggregation and you are lost.

After the chance encounter with the little boy in Dubai in September 2016, I started after a worldwide survey. The survey results helped me to design almost everything that we see today in Justori. Then with help from my classmate from Hindu School, Gautam Aitch, who lives in the US, we launched a global tender. It was finally awarded to a team in Calcutta as they were the best in our assessment. The first milestone was Bengali New Year 2017 when we launched a proof-of-concept version of Justori in Mauritius. By then I had already decided to move to France because it was not possible to promote something like this from a far-flung corner of the Indian Ocean. My wife and I shunned our big life in Mauritius and set ourselves in a small student apartment in Nantes — the city of Jules Verne, whose stories inspired me since I was a little boy in Calcutta. The basic iOS version came in September 2017. The current version was launched in September 2018. The first round of financing came in from friends and families in April 2019 when the real journey of Justori started.

France is at a confluence of different cultures and languages. Besides, I needed to have access to the financial world. Paris is just two hours by train from Nantes. London is a one-hour flight and so is Frankfurt. Also the quaint lifestyle suits me better. But the main reason is the humane values cherished in France. Liberal thoughts, love for art and culture are all in great sync with the French society.