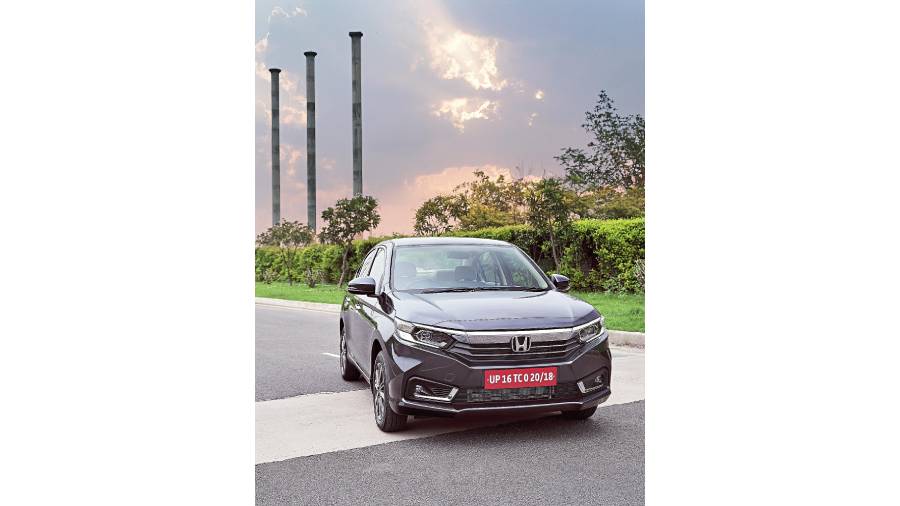 It was just about three years ago that we first drove the second model of the Honda Amaze. Sub-four-metre sedan though it was, it had the poise and feel of a bigger vehicle and it looked the part too. So, there wasn’t all that much that was needed to be done when the company was giving the car a midlife update. Thankfully, Honda hasn’t tried to fix anything that ain’t broke, so to speak

When we drove it earlier, we did feel that the car was visually front-heavy, particularly with the broad chrome bar going across the top of the grille while there was no chrome at the back. That is something Honda has addressed. So the front grille has been redesigned to look lighter and a strip of chrome has been added to the rear bumper to balance it.

That apart, the other changes to the exterior has primarily been the lights and the front and rear bumpers. The tail lights get a C-shaped LED treatment that’s quite neat. Up front there are LED projector beam headlamps in the top model and LED daytime running lights. The fog lamps have been given a new housing and the bumpers at both ends are new. The rear one looks less flat while the front one gets a design in sync with the grille. The door handles are also chrome now as compared with body-coloured ones earlier and have touch sensors.

Interior cosmetic changes include brushed silver inserts for the doors and the dashboard that break the monotony of the black plastic. The steering, too, gets similar bits to make it look more upmarket than before. The gear lever gets a leather boot now and bits of chrome have also been added to enhance the look. The supportive seats, the generous legroom front and back and the airy passenger space remain unchanged.

The engine and drivetrain have been left untouched in this iteration of the model, which isn’t a bad thing at all because they were quite good to begin with. The petrols are smooth although not hugely powerful and one doesn’t really need to bother with the paddle shifters in the CVTs. The diesel is punchier, particularly the manual. This time around we drove the CVT automatic and reaffirmed that it would be very easy to live with in city conditions. On highways, it will do the legal speeds quite competently. For more fun, opt for the manuals. As for the ride, it remains as poised as ever and passengers stay largely insulated from bad roads.

This is a competent car that punches above its size for comfort while the diesels are quite frugal. Quality is good and makes a strong case for a buy in its segment.

THE NEW AMAZE IN NUMBERS

Transmission: 5-speed manual or CVT automatic for both petrol and diesel

The interiors have been given a mildly more upmarket feel with brushed silver garnishes on the doors, dash and steering

The tail lamp design is new and are now C-shaped LEDs. There has also been a mild attempt at balancing the visual weight of the front with some chrome on the rear bumper as well

The two-tone alloys are smart

There are now LED projector beam headlamps and DRLs in the top version.