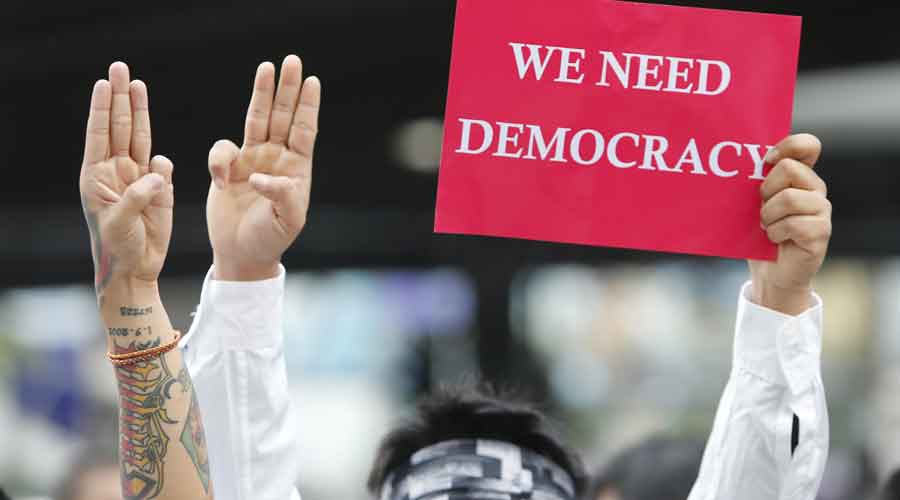 India will be left playing catch-up, as in Afghanistan, unless it recognises the changing ground realities in Myanmar.
File Photo.
Subir Bhaumik   |   Published 15.11.22, 04:10 AM

Myanmar’s military junta has clearly bitten more than it can chew. Apart from a massive surge in multiple armed insurgencies in border provinces dominated by ethnic minorities, the generals are now faced with armed resistance in the Burman heartland, where an initially peaceful movement for the restoration of democracy has turned violent following brutal repression. Nothing illustrated this better than a former Miss Myanmar, dressed in military fatigues with a rifle, announcing her decision to join the People’s Defence Force, the armed wing of the National Unity Government.

The military junta clearly faces its toughest challenge in the strategic provinces where long-running ethnic insurgencies have intensified and the Tatmadaw has increasingly lost territorial control. In desperation, the generals have ordered air strikes on rebel targets but these have caused much collateral damage and a hardening of positions. On October 23, the Burmese air force bombed the anniversary celebration of the Kachin Independence Organisation, killing at least 60 people and injuring around 400 others.

Intense fighting between Burmese troops and the separatist Arakan Army since the breakdown of a tenuous ceasefire in July has led to a dramatic loss of effective control by Myanmar’s military junta over Rakhine. In September, the AA’s deputy commander, Nyo Twan Awng, called for “a final decisive war for building the state of the Arakan”.  This was no hollow publicity stunt: the AA now boasts of effective  control over two-thirds of Rakhine and a substantial portion of neighbouring Chin state. Founded in 2009, the AA now has nearly 30,000 well-armed troops, including at least 6,000 in areas controlled by its allies in Kayin, Kachin, and Shan provinces. More than 100 Burmese troops have died and sixty of their camps overrun since fresh fighting erupted. But the Tatmadaw has failed to retake lost ground despite additional deployment of land forces and airpower. Besides Kachin and Rakhine, the Tatmadaw has lost control over territories in Karen and Shan states. The United Wa State Army controls a huge area in eastern Shan. The military junta has avoided a confrontation with the UWSA that has more than 20,000 fighters and even the latest anti-aircraft batteries.

The AA has taken over, partly or fully, a number of smaller townships and could even take control of Maungdaw. If that happens, the Arakan Army United League of Arakan will control the trade route to Bangladesh. The rebel group appears keen to deal directly with Bangladesh to settle the issue of the return of Rohingya Muslims. The AA-ULA is willing to support the repatriation process not just to gain the support of the Rohingya but also to earn international goodwill. Can Dhaka, upset with Burmese shelling on border villages, afford to turn its back on the AA-ULA overtures?

Similarly, India may find it difficult to operationalise the Kaladan Multi-Modal Transit Transport project without the support of the AA-ULA. Work on the KMMT was frequently disrupted by the AA-ULA in retaliation against Indian military operations against the AA’s covert bases in Mizoram. But now it appears that the AA-ULA are inclined to deal with India. The Narendra Modi government, which has preferred to wait and watch in Myanmar for fear of driving the military junta into Chinese embrace, will have to rethink its Myanmar policy that has avoided direct support or covert engagement with non-State actors since 1997.Prior to that, India not only supported rebel groups like the Kachin Independence Army with weapons but also backed the movement for democracy.

But neither can India afford a fresh influx of refugees into Mizoram and Manipur; nor can it wait endlessly to operationalise the KMMT corridor.  China  has the Burmese military junta under its control. Beijing has played its cards well with the AA-ULA. India will be left playing catch-up, as in Afghanistan, unless it recognises the changing ground realities in Myanmar.