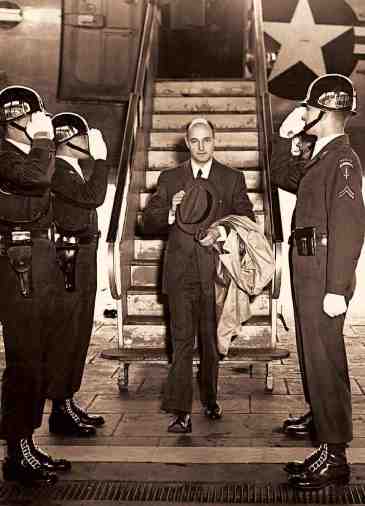 The infant Dean Acheson believed that if the world was round, Indians must be standing on their heads. If the future secretary of state of President Harry Truman hadn’t soon tumbled to the laws of gravity, Indian failure to perform feats of acrobatics might have prompted further crises in relations with the United States of America, which is singularly unable to see anything except in terms of American self-interest. India is also handicapped because although Subrahmanyam Jaishankar correctly stressed during the Raisina Dialogue the importance of engaging globally on the basis of “who we are” rather than trying to please the world, the advice is not easily followed in a country that takes pride in sending 1.3 crore of its nationals abroad to seek a livelihood.

Russia’s invasion of Ukraine is a reminder that even if Charles Wilson, defence secretary to President Eisenhower and a former General Motors president, never boasted “What’s good for GM is good for America”, Washington has always given the impression that what is good for America is good for the world. No one can possibly condone the death and destruction that Russia has inflicted on plucky little Ukraine or the sufferings of more than 12 million Ukrainians forced to flee their homes. But let’s face it, the rest of the world doesn’t bask in blissful tranquillity either. Other wars, other conflicts, other deadly projects are also ravaging innocent lives in Myanmar, occupied Palestine and war-torn Yemen. Syria and Libya are battlefields for rival forces backed by Russia and Turkey. Impoverished Afghanistan can again explode at any moment. Famine threatens millions of victims of Ethiopia’s civil war. Islamists have found a new field for atrocities in West Africa. The dreary list goes on but these brutal eruptions don’t hit the headlines because the US is not directly interested.

If Indian television channels were moved by human compassion or any serious interest in understanding the machinations that underlie the news, they would have sent teams to report on these searing Asian and African conflicts. Instead, they rely on government handouts for global news for the entirely credible reason that they are too poor to send reporters and cameramen to the world’s trouble spots. Soaring inflation and a dramatically falling rupee compound the difficulty of travelling abroad. Yet, our television teams suddenly seem to be awash with funds. The resultant coverage of Ukraine may not be partisan, but makes no attempt to explain the Russian point of view. I have not come across any hint of George Kennan’s argument that independent Ukraine’s borders “embraced several regions, containing millions of people who had never been Ukrainian at all but had for centuries been largely, and usually exclusively, Russian in speech, tradition, and character.” Presumably he meant the Donbas. Kennan was the famous ‘X’ whose anonymous article in the July 1947 issue of Foreign Affairs first outlined the concept of containment, making him the father of the Cold War.

As a political realist, former US ambassador to Moscow and expert on communist strategy, he was surprised that the Russians did not act earlier in Crimea, and not at all in Moldava where Russian peacekeeping units functioned under the Conference on Security and Cooperation in Europe. Reading his later analyses, one gets the impression that Kennan diagnosed the US as the prisoner of a no longer relevant Cold War, haunted by the rise of “a great, terrible, remorseless enemy” (as in Germany on the eve of the Second World War) in North Korea and Vietnam. Had he not died in 2005, Kennan might have detected the same terror of a global challenge when Vladimir Putin sent troops into Ukraine on February 24. The wonder for him would probably have been that the invasion was so long delayed. As for the excitement on India’s small screens, I cannot but think of the old adage that he who pays the piper calls the tune.

The only other reason that I can think of for this degree of domestic interest is that the US is the land of their dreams for many aspiring young Indians for whom, adapting Dr Johnson, the noblest prospect is the high road to airports from where flights take off for Western cities. Even Rishi Sunak, Britain’s Punjabi-origin chancellor of the exchequer, prized the Green Card that he was ultimately obliged to surrender. Yet, time was when it was almost a patriotic duty for Indians — even, paradoxically, those who yearned after the American Dream — to denounce the US. Now, the authorities seem to be colluding with them. The previous round of India-Britain free trade agreement talks foundered on the rock of immigration; Narendra Modi’s recent visit to Germany acknowledged the centrality of this issue with an agreement on ‘Migration and Mobility’. Perhaps India has discovered abroad scope for domestic political dividend. The rumbustious ‘Namaste Wembley!’ jamboree in 2015, its ‘Howdy Modi’ replica in Houston, and the recent, more modest, copy in Copenhagen demonstrated that no Indian is more fervently patriotic than the non-resident belting out “Modi! Modi!” Fulfilling the achhe din pledge, which David Cameron repeated at Wembley to resounding cheers, would wipe out the ruling party’s most clamorous constituency by deterring emigration. Jaishankar’s “We have to be confident about who we are” will remain an empty hope so long as a limping economy forces Indians to seek a decent living abroad with government encouragement.

India can ignore Western strictures about its United Nations votes. Whether or not Franklin Roosevelt ever said that Anastasio Somoza, Nicaragua’s corrupt and tyrannical dictator, “may be a son of a b***h, but he’s our son of a b***h”, the story testifies to American flexibility. The expected elevation in the Philippines of the son of another infamous US protégé who was ousted 36 years ago confirms that opportunism generates no lasting grudges in statecraft. It’s the same everywhere. Who remembers today, as Manash Ghosh’s Bangladesh War: Report from Ground Zero reminds us, that conspiratorial Americans almost aborted the birth of Bangladesh? Ukraine’s trauma has injected new life into the North Atlantic Treaty Organization whose first secretary-general, Lord Ismay, an old India hand, defined its purpose as being “to keep the Russians out, the Americans in, and the Germans down”. Ismay believed that NATO “must grow until the whole free world gets under one umbrella”. Driven by that objective, NATO has increased its membership from 12 in 1949 to 30, with two more waiting to join. Some might generously see the accession of 14 countries after the Soviet Union imploded as validating Mikhail Gorbachev’s faith in “a common European home”. Others — Western Cold War warriors — celebrated it as the fall of another citadel on that triumphant journey since Richard Nixon exulted, “The time has come for America to reset its geopolitical compass” because Gorbachev’s vision (or pragmatism) had given the US “a historic opportunity to change the world”.

Astonishingly, even Russia applied to join NATO in 1954 before the Warsaw Pact was put in place. Kennan’s opposition on the grounds that it was “like an unrepentant burglar requesting to join the police force” made no attempt to conceal that the alliance was a “police force” directed against Moscow, the old and forever enemy. He might have pondered in later years whether the rejection was wise. Those who initially opposed German reunification and a united Germany joining Western alliances withdrew their objection when they realised that a shared cooperative architecture was a more effective guarantee of peaceful cooperation than containment. That might have worked for Russia too. Gorbachev also said that if peace had to be preserved, you must accept that the other side’s security is just as important to you as your own.