Advertisement
Home / Opinion / Threat to speech: Law 'designed to suppress the liberty of the citizen' used against Gandhi and Indians now

Threat to speech: Law 'designed to suppress the liberty of the citizen' used against Gandhi and Indians now

The case in Bihar is what in Hindi would be called a dhamki, a threat 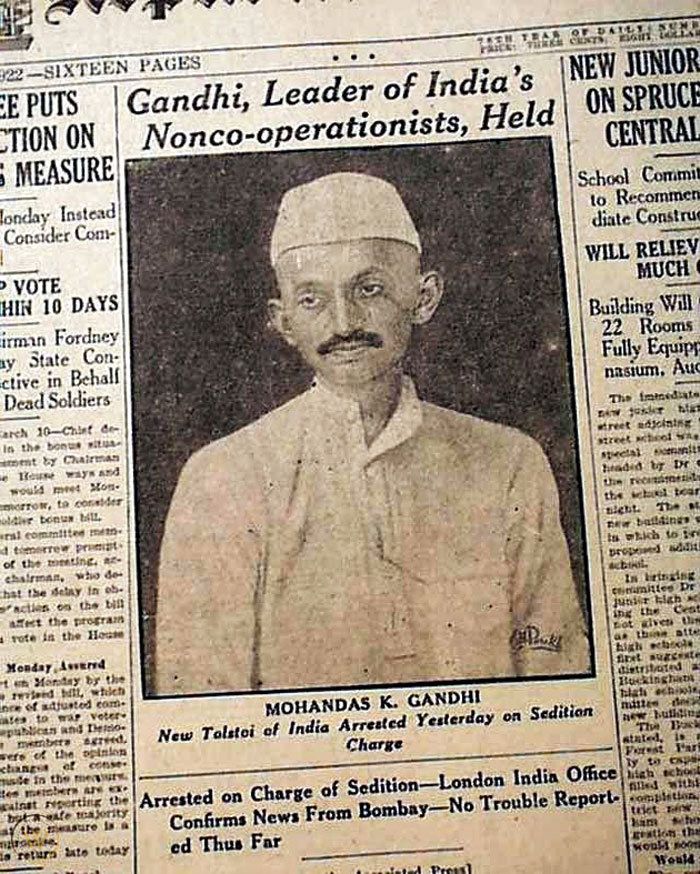 A newspaper report of M.K. Gandhi being arrested for sedition
Wikimedia Commons
Ramachandra Guha   |   Published 03.08.19, 03:11 AM

Earlier this month, I joined a group of film-makers and scholars in sending a letter to the prime minister, alerting him to the high number of hate crimes committed in India in the name of caste and religion. “The lynching of Muslims, Dalits and other minorities must be stopped immediately,” we urged.

Knowing the Central government’s extreme sensitivity to criticism, our letter reminded the prime minister that “criticising the ruling party does not imply criticising the nation. No ruling party is synonymous with the country where it is in power. It is only one of the political parties of that country. Hence anti-government stands cannot be equated with anti-national sentiments. An open environment where dissent is not crushed, only makes for a stronger nation”.

The letter concluded with these words: “We hope our suggestions will be taken in the spirit that they are meant — as Indians genuinely concerned with, and anxious about, the fate of our nation.”

The letter I had signed was met immediately with a counter-letter, calling our modest initiative a “conspiracy” to “defame the nation”. The critics claimed our aim was “tarnishing India’s international standing and to negatively portray Prime Minister Modi’s untiring efforts to effectuate governance on the foundations of positive nationalism and humanism”. We might have thought our letter an appeal for civic decency, a call to honour the ideals of the Indian Constitution, which mandates us not to discriminate on the basis of caste, gender, or religion. Our critics, however, darkly alleged that we were “working to a certain agenda and are only playing into the hands of those forces that are out to Balkanise India and destabilise her”.

That there was a rejoinder so soon and so vehemently worded did not surprise me. That the likes of Aparna Sen and Shyam Benegal were called anti-national was entirely consistent with the zeitgeist, the poisonous spirit of what passes for public discourse in India today. What was more dismaying, however, was that this counter-letter was followed by a brazen attempt at legal intimidation. A criminal complaint was filed in a Bihar court, charging that our letter was in violation of specific sections of the Indian Penal Code: namely, Sections 124A (sedition), 153B (assertions prejudicial to national integration), 290 (public nuisance), 297 (trespass to wound religious feelings), 504 (intentional insults) of the IPC.

Had India anything like a transparent judicial system, had our country had the sort of freedom of expression that mature democracies have, then this sort of patently mala fide and malevolent complaint would never be entertained in a court of law. Unfortunately, we have a less than perfect justice system, since we are a flawed democracy. And so, according to news reports, this case shall come up for hearing today, August 3, the day this column is being printed.

The case in Bihar is what in Hindi would be called a dhamki, a threat. The idea behind it is to deter criticism of the current government, to stop democratic debate in its tracks. Notably, the signatories to the letter to the prime minister are being sought to be silenced under provisions drafted in the 19th century by an imperialist and racist regime. That these sections still exist on our statute books is a disgrace. Back in 1922, a certain Mohandas K. Gandhi was imprisoned by the British raj under Section 124A, the notorious sedition clause of the IPC. Like Aparna Sen and Shyam Benegal today, Gandhi had not fired a gun or thrown a bomb, since (like them) he was incapable of either. Like Sen and Benegal and their co-signatories, all he had were his words, which he used, in the pages of his newspaper, Young India, to offer some cogent and well-merited criticisms of the policies of the government of the day. For this he was charged with ‘sedition’.

Gandhi’s words to the court in 1922 are worth recalling: “Section 124A under which I am happily charged is perhaps the prince among the political sections of the Indian Penal Code designed to suppress the liberty of the citizen. Affection cannot be manufactured or regulated by the law. If one has no affection for a person or system, one should be free to give the fullest expression to his disaffection, so long as he does not contemplate, promote or incite to violence.”

After he came out of jail, Gandhi called for a countrywide agitation demanding the repeal of Section 124A. The section, said Gandhi, constituted “a rape of the word ‘law’”; it was “established by the naked sword, kept ready to descend upon us at the will of the arbitrary rulers in whose appointment the people have no say”.

In fact, the colonial State had suppressed Gandhi’s right to free speech while he was still in South Africa. In 1910, his book, Hind Swaraj, was impounded by Customs in Bombay, and banned from being distributed in India. Appealing against the ban, Gandhi wrote: “In my humble opinion, every man has a right to hold any opinion he chooses, and to give effect to it also, so long as, in doing so, he does not use physical violence against anybody.”

Gandhi and other nationalists had hoped that the coming of swaraj would mean the casting into the dust-bin of repressive laws that had no place in a free and independent India. Tragically, these laws were not repealed or replaced; they still hang over the heads of us citizens, to threaten and intimidate us into submission and silence. It was under these obnoxious sections of the IPC that many different cases were brought in lower courts against the great artist, M.F. Husain, forcing him to flee his homeland into exile. It is these sections that have been used by party ideologues and state governments to have books and films banned and suppressed. It is these sections that are now being used to criminally harass the writers of a courteously worded and utterly non-violent letter to the prime minister.

Right-wing regimes and right-wing ideologues have, of course, been very quick to misuse these colonial-era laws to suppress free expression. For all their exaltation of the nation and their loudly professed nationalism, they are happy to use imperialist means to serve their purposes. However, other parties and leaders have competitively kept pace with them in this regard. Mamata Banerjee, in West Bengal, has been as eager as any Bharatiya Janata Party chief minister to use repressive laws to suppress democratic dissent. And the United Progressive Alliance government, with Manmohan Singh as prime minister and P. Chidambaram as home minister, shamelessly invoked the sedition clause to put peaceful protesters in prison, most notoriously in the case of the peaceful protesters against the Kudankulam nuclear power plant in Tamil Nadu.

That Indian politicians, across party lines, have used colonial-era laws to suppress freedom of expression should not surprise anybody. What is more disappointing is that the judicial system has not done more to prevent this shrinking of democratic space. Motivated petitions aimed at pre-emptively shutting up democratic and independent voices assuredly have no place in a court of law. It is time the Supreme Court issued clear directions to lower courts so that this pernicious practice of intimidation stops. Where politicians are increasingly governed by sentiments of revenge and retribution, citizens look to the judiciary to more actively play its Constitutional role as guarantors of liberty and free expression. In this regard, the judges could refer to the maxim that Mahatma Gandhi offered in 1910, amended for our times as follows: “Every man [or woman] has a right to hold any opinion he chooses, and to give effect to it also, so long as, in doing so, he [or she] does not use [or advocate] physical violence against anybody.”

For giving effect to his views, non-violently, Gandhi was imprisoned by the British raj in 1922 under Section 124A of the IPC. Now, for giving effect to their views, also non-violently, the signatories to a letter to the prime minister of independent India in 2019 are sought to be arraigned under the same colonialist clause. And to think we boast of being the ‘largest democracy’ in the world.

A Gandhian who rebuked Gandhi for moral blindness