Regardless of the damage to the credibility of India’s investigators and diplomats, the PM is preparing for the battle in 2019 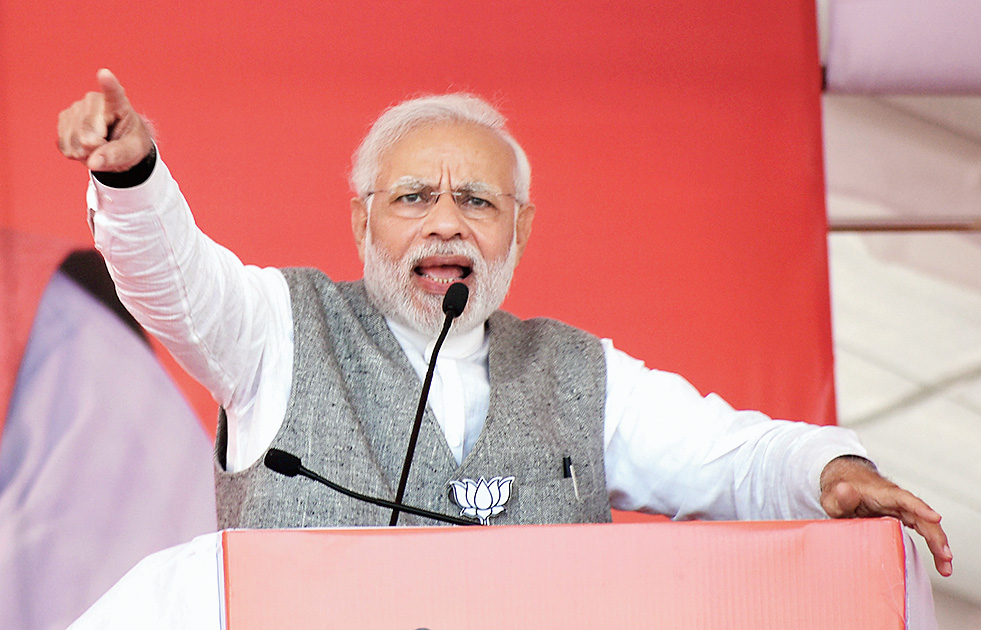 In his zeal as the BJP's biggest vote catcher, Narendra Modi sometimes forgets that he is also the prime minister of India, and a particularly egregious instance of this memory lapse was on display last week
PTI
Manini Chatterjee   |     |   Published 10.12.18, 03:01 AM

Narendra Modi is the biggest vote catcher for the Bharatiya Janata Party and its most indefatigable election campaigner. But in his zeal to perform these roles, he sometimes forgets that he is also the prime minister of India.

A particularly egregious instance of this memory lapse was on display last week. Addressing an election rally at Sumerpur in Rajasthan on December 5, Modi made headlines with his reference to the extradition from Dubai of Christian Michel — the alleged middleman in the AgustaWestland VVIP helicopter deal.

In his trademark theatrical style, the prime minister said, “Brothers and sisters, you must have heard of the VVIP helicopter scam of thousands of crores... you must know about the letter, Madame Soniaji’s letter... After we came to power, we kept searching for it in the files and finally found a raazdar [keeper of secrets] who served powerful people. He was a dalal [middleman]... He was a citizen of England and lived in Dubai where he served the friends of the naamdar [dynast — Modi’s latest epithet for Rahul Gandhi]...”

The government of India had brought him from Dubai, Modi said, and added with a snigger: “Abhi raazdar raaz kholega, pata nahin baat kahan tak pahunchegi, kitni door tak pahunchegi (Now the keeper of secrets will spill the beans and who knows how far it will reach).”

Political mud-slinging is par for the course during elections. But rarely, if ever, has the head of a government resorted to such a pastiche of lies, half-truths, innuendoes and insinuations on a complex matter with international ramifications which is still under investigation. His speech prompted many to suspect that the extradition — just before the final day of campaigning in Rajasthan and Telangana — was timed to suit the ruling party’s political agenda. Worse, it cast a shadow on the entire process of investigation and delivered a further blow to the already tattered credibility of agencies such as the Enforcement Directorate and the CBI.

Modi may think that he managed to fool the villagers of Rajasthan (and the millions who saw the speech on their TVs or mobiles) into believing that he was the sole crusader against corruption who had unearthed a massive scam. But anyone who has even cursorily followed the chopper scam knows that it broke and was dealt with before Modi came to power.

It was in 1999, during the Vajpayee regime, that the Indian Air Force first made a proposal to buy 12 high-end helicopters for the use of the president, prime minister and other VVIPs. AgustaWestland, the British arm of the Italian firm, Finmeccanica, secured the deal for Rs 3,600 crores in 2010. Soon after, investigations in Italy led to the arrest of the chairman of the Finmeccanica group, Giuseppe Orsi, and the CEO of AgustaWestland, Bruno Spagnolini, on charges that they bribed middlemen to secure the deal.

The Manmohan Singh government put the deal on hold in February 2013 and cancelled it in 2014 on the grounds that it had violated the integrity pact. It also recovered most of the money that had been paid for the choppers. The CBI investigation into the deal also began in February 2013 — leading to the naming and eventual arrest of former IAF chief, S.P. Tyagi, his businessman cousin, Julie Tyagi, and Delhi based lawyer, Gautam Khaitan, on charges of receiving bribes.

Apart from members of the Tyagi family, the FIR filed by the CBI in March 2013 also named three middlemen — Carlo Gerosa, Guido Haschke and Christian Michel. The Enforcement Directorate too started investigations to track the kickbacks that were allegedly paid through a network of companies floated by the middlemen. According to the Indian agencies, while Gerosa and Haschke dealt with the Tyagi family, Michel — an old India hand — dealt with bureaucrats and politicians.

During the trial in Italian courts, Haschke turned approver. It is Haschke’s dairies and notes — which he claimed to have written under the instructions of Michel — that form the basis of the allegations levelled at the Congress leadership by Narendra Modi. Haschke’s notes included a “Budget Sheet” in which abbreviations such as AP and FAM figure — referring, according to the BJP, to Ahmed Patel and the Gandhi “Family.”

In interviews to the Indian media from his Dubai residence, Michel has repeatedly dismissed the notes and papers as fake. Michel has said he never got along with Haschke and that is the reason why Haschke sought to falsely implicate him. Haschke, he has alleged, used the Tyagis as a front to siphon off most of the kickback money back to Italy. “The real problem lies in Italy,” Michel told an Indian TV channel in May 2016.

But it is not Italy but an Indian of Italian origin that has obsessed the Modi regime — and her name is Sonia Gandhi. In July this year, after Christian Michel was arrested in Dubai at India’s request, his lawyer, Rosemary Patrizi, and his sister, Sasha Ozeman, gave interviews to India Today alleging that Indian investigators wanted him to name the then Congress president in the chopper deal.

Michel, his lawyer said, was being coerced to make false claims that he knew Sonia Gandhi. “This year, they (investigators) went to Dubai to interview him. What they wanted really was a signature. They wanted that he corroborated telling things that were not true. He said no, I am not going to sign. After that the people went back to India and he was arrested.”

Earlier, in 2016, Michel himself had alleged that the Modi government had offered to free the two Italian marines in Indian custody in exchange for evidence linking Sonia Gandhi to the chopper scam. Michel had made these allegations in letters to the International Tribunal for the Law of the Sea in Hamburg and the Permanent Court of Arbitration at The Hague where India and Italy were arguing the marines issue. Michel’s claim that Modi had made this offer at a “brush by” meeting with his Italian counterpart on the sidelines of the UN general assembly meeting in September 2015 had been dismissed as ridiculous by the foreign ministry in India. But subsequent developments on the marines issue as well as the chopper scam case in Italy makes those claims seem less outlandish in retrospect.

In January this year, an Italian appeals court acquitted both Giuseppe Orsi and Bruno Spagnolini of all charges. The other two middlemen hold little interest for India. The focus has only been on Christian Michel. The Modi government has doggedly pursued his case — first with the Italian government and then with the UAE. In its eagerness to please the UAE leadership, India even helped “abduct” — according to a UN body — the princess, Sheikha Latifa, from a boat off the Goa coast and return her to Dubai. She was said to be fleeing from her repressive father who happens to be the ruler of Dubai and the prime minister of the UAE.

So important was the extradition of Michel that the National Security Adviser, Ajit Doval, skipped the G 20 summit and went to Dubai instead — and triumphantly brought the fugitive to India just in time for Modi’s campaign-end flourish.

But Modi’s speech gave the game away. Everything Michel and his lawyer had alleged in the past, and which Indian authorities had vociferously denied, was vindicated by that speech. Modi, in fact, went much further than any CBI or ED charge sheet has by claiming the existence of “Madame Soniaji’s letter” and that Michel provided services to friends of the naamdar. Even before the CBI could begin its interrogation of Michel, Modi was already sure that many “secrets” would tumble out.

Yet regardless of the damage his speech has caused to the credibility of India’s investigators and diplomats, the prime minister is unlikely to retreat. Whatever be the “semi-final” results tomorrow, Modi is readying himself for an even more belligerent battle in 2019. The “confessions” of Christian Michel, he thinks, will provide him just the weapon he needs to tarnish the Congress again and make the people forget the debris of broken promises they are mired in today. There’s a hint of desperation in that hope...