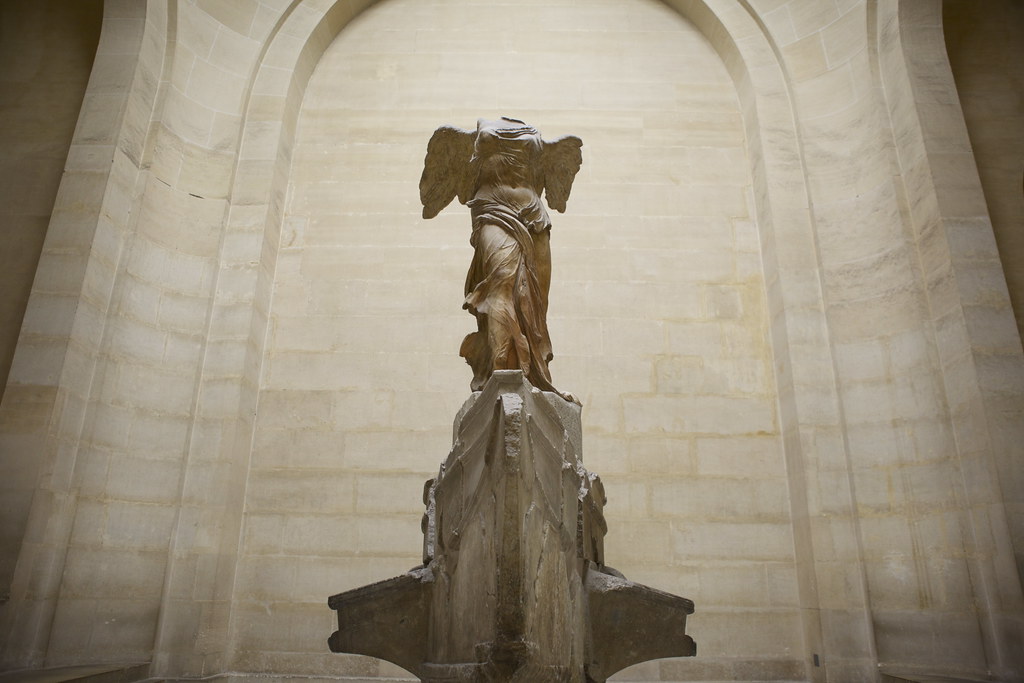 The Winged Victory of Samothrace, a marble sculpture that depicts the Greek goddess, Nike, apparently smells like white tuberose flowers and woody myrrh
(Flickr)
The Telegraph   |   Published 30.06.19, 11:16 AM

Sir — Nothing is left to the imagination anymore. The Louvre has teamed up with a Parisian perfume company to create scents to match eight of its masterpieces. For instance, the Winged Victory of Samothrace, a marble sculpture that depicts the Greek goddess, Nike, apparently smells like white tuberose flowers and woody myrrh. One wonders what Michelangelo’s the Rebellious Slave — one of Louvre’s prized sculptures — who, one assumes, was not blessed with divinity, unlike Nike, smells like. Would the scent of blood, sweat and tears be as sweet to people as that of white tuberoses?

Sir — The untimely demise of a Class X student, who committed suicide last week, is inconsolable. At this point of time, it is crucial that we take a hard look at where we are going wrong. Everybody wants their kid to stand out; academic credentials have become the yardstick to measure success and potential. This is dangerously erroneous. I have seen several people who have risen through the ranks and done well in life, in spite of mediocre educational performances. Children these days do not have the liberty to have fun; their leisure time has been snatched away by parents who see their child’s performance as a status symbol. A study published in the journal of International Organization of Scientific Research shows that 86 per cent of the respondents blamed parental pressure when it came to the desperate need to perform well in their academic activities.

The government should step in and frame regulations to curb the excessive hype around external coaching, and media campaigns must be put out to ensure that self-learning becomes the preferred choice of both parents and students.

Sir — The death of a Class X student of a well-known Calcutta school is a grim reminder that a large number of youngsters are struggling to cope with academic pressures. There is a tremendous burden of expectation on students to excel. Many a time, students are told to go above and beyond their capacity. Parental and societal expectations drive them to depression. This situation is in spite of the fact that education has nothing to do with faring well in examinations.

Adolescents are especially vulnerable. Hormonal and physiological changes during this time make such students struggle more than younger children. Some of the schools in the city have employed counsellors for the students. But parents, too, need counselling regarding how best to deal with their children.

Sir — The misguided idea that scoring high marks in examinations is the only success that matters in life led to the premature death of a promising student. Unless we, the adults, change our mindset soon, this will not be the last life we lose.

We have, unfortunately, forgotten the basic concept of education. Moral and spiritual uplift, awareness of social responsibility, respect for everyone and tolerance are some of the virtues that education is supposed to inculcate. Our school and college curricula should be thoroughly revised, otherwise it will churn out ‘successful’ but inhumane people.

Sir — Some serious questions have been raised regarding the proper way to parent after the death of a Class X student of a reputed school in the city. Depression amongst children has become common these days. Working parents remain busy, and children often do not get the psychological support necessary while growing up. It

is high time parents were made aware about how to deal with their offspring. Yet, the lack of time does not stop parents from insisting that children do well in academics and compete to outshine their peers. Counselling sessions for parents should be started by private schools and state governments, especially for parents of adolescent children who are most vulnerable to the pressures of life.