Advertisement
Home / Opinion / The challenge for Kashmiris is to find effective, non-violent ways to counter the situation

Gandhi understood the urge to hit back at one’s oppressors. But he also saw that violence always led to more violence and suffering 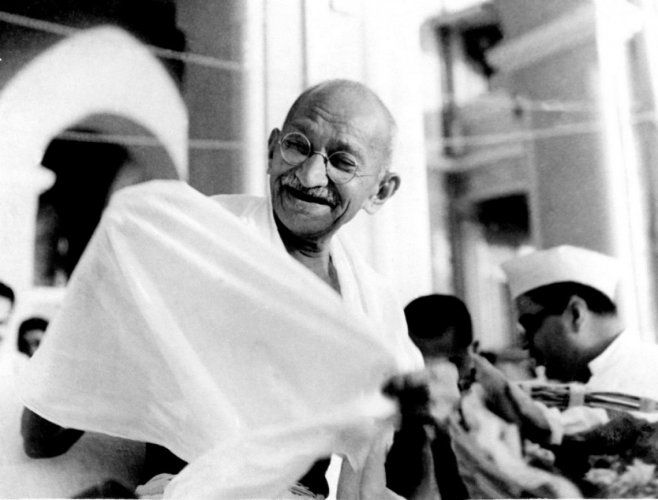 Along with his deep examination of morality in politics, M.K Gandhi was also a master tactician. He understood better than most politicians that you should not play the game your opponents want you to or employ the tactics with which your opponents are comfortable
Wikimedia Commons
Ruchir Joshi   |   Published 13.08.19, 03:44 AM

Anyone who is shocked or deeply surprised by the actions of the Narendra Modi-Amit Shah team on Kashmir either hasn’t been paying attention or is mimicking ostriches who put their heads in the sand. Anyone who is celebrating the peremptory guillotining of Article 370 that Sardar Vallabhbhai Patel put in place in 1950 or feeling quietly or less quietly happy about the constitutional mugging we have just witnessed, clearly cares little about the peaceful, democratic resolution of the Kashmir issues or, indeed, about federalism or the sanctity of the Constitution of India. Some of the people backing the 370 hijack will likely come to regret it when similar short-circuiting of the Constitution is applied to their states and their parties — please keep watching the spaces in Mr Patnaik’s Odisha and Mr Kejriwal’s Delhi, not to mention the West Bengal of the tactically silent Ms Banerjee and the Trinamul Congress.

Before going further, perhaps it’s best to clarify that not all of us so-called Left-liberals hold the same position on Kashmir. This column, for one, has long argued that there is no reason to hand over Jammu and Kashmir or the Valley to Pakistan via the various militant jihadi groups. Many of us have had clear differences with those lefty intellectuals who, while correctly deploring the violence inflicted by the State security forces, show a strange fondness for the AK-56s held by jihadis in Kashmir or school-age children inducted into Maoist units in Chhattisgarh. For these intellectuals, violence as an option cannot be ruled out; they themselves may be unable to pick up the gun to fight the State but they can understand and support someone else who does. Now, it’s not difficult to understand why someone who has suffered and witnessed grotesque cruelty at the hands of the security forces might want to inflict the same bullets, the same pellets, the same murdering upon the uniformed men; understanding this is not the problem, the problem lies in supporting this urge.

A little over a hundred years ago, a diminutive Gujarati lawyer approaching middle age also understood this urge to hit back at one’s oppressors. But then M.K. Gandhi saw that violence always led to more violence and suffering. He saw that the oppressive State, with the grand machinery of violence under its command, the army and the heavy weaponry, actually relished occasional violent uprisings against itself because it gave the State the excuse to use its vastly superior instruments of violence, to keep the military and its weapons well-oiled and in practice, to enable them to cause great damage and to set an example discouraging future rebellions. In the few instances where the oppressed were successful in defeating and capturing the levers of State they rapidly turned into oppressors themselves; the violence they had employed mutating them into the kind of people they had been fighting and nullifying any moral cause they may have had. In the final reckoning it was this, the fact that violence almost always leads to the collapse of morality and ethics, of one’s dharma and vivek, that made Gandhi term all violence immoral.

Gandhi’s two main acolytes, Nehru and Patel, who took over the reins of independent India, were realists who understood that a State needed to have an army and a police force, that unfortunately violence would need to be employed — judiciously — from time to time to defend the borders of the newly formed country, or to maintain law and order against forces of intolerance within the country. They were tested soon enough when the Pakistani irregulars attempted to capture Kashmir, and they pushed back hard with the Indian army and air force, as far as they could under the situation prevailing at the time. Soon afterwards the two men also used the army to capture the state of Hyderabad and make it a part of India. This was also done by Nehru in 1961 to bring Goa into the Union.

The problem we have is that the leaders who succeeded Nehru and Patel did not share the two men’s aversion to frequent and reckless use of the army and paramilitary against our own people (or people the Centre deemed as our own in Kashmir and the Northeast). Starting from Indira Gandhi and all the way to Modi, the army and the paramilitary have been treated as rough and ready tools made for everyday use against Indian citizens. This is a far cry from the view held by Patel and Nehru that these forces should be used rarely, judiciously, for as brief a period as possible, with regret and care, as a last resort only when all other efforts had failed. Whereas for Nehru and Patel the military and paramilitary were firefighters, we have now come to a point where today the forces are treated as useful fire-starters.

So, with this further toxification of the cesspool that is the Kashmir situation, we are now obliged to look again at competing ideas of India: Nehru and Patel’s idea of India versus Shah-Modi’s idea of Akhand Bharat; at violence and non-violence, and at how the army and paramilitary should or should not be used. For those of us who are appalled rather than surprised at the government’s disgusting manoeuvres over Article 370, for those of us who remember Modi and Shah’s long track-record, it is clear that they are not bothered about scores of Muslims being grossly injured in Kashmir. If the protests that have begun escalate and the violence doesn’t abate, and if the sheer terror inflicted upon the population in the valley doesn’t cease, it will almost certainly lead to young Kashmiris swelling the numbers of the separatist groups. This is turn will lead to a self-generating cycle that will allow the government to claim an even freer hand in using heavier and heavier machinery of State violence. This will further divide Kashmiris from other Indians and allow the government and its cheerleaders to call for swamping the valley with people from outside the state.

The one lesson history teaches us is that extremists hate moderates like acid hates the alkaline. Which is why Islamist terror-groups always aim to obliterate any chance of peace between India and Pakistan; which is why the Maoists and the State security have both consistently targeted the non-Maoist, non-violent non-governmental organizations working to protect adivasi rights against mining companies in Chhattisgarh and adjacent areas. Which is why the Hafeez Saeeds celebrated both the Pulwama attack and the Indian air force retaliatory raid. Similarly, the chief targets of this surgical strike on the Constitution are the moderates in Kashmir who have risked their lives to keep flying the flag of a secular democratic republic of India in the face of separatists and jihadis.

This attempted dismantling of Nehru and Patel’s legacy brings us back once again to their teacher and leader. Along with his deep examination of morality in politics, M.K. Gandhi was also a master tactician. He understood better than most politicians that you should not play the game your opponents want you to or employ the tactics with which your opponents are comfortable. This government in Delhi and its security advisers understand, anticipate and relish violent responses. The challenge for Kashmiris and for all of us who deplore what the BJP-RSS leadership is doing to the country is to figure out effective, non-violent ways to counter their depredations.

Article 370 and the rough ride ahead