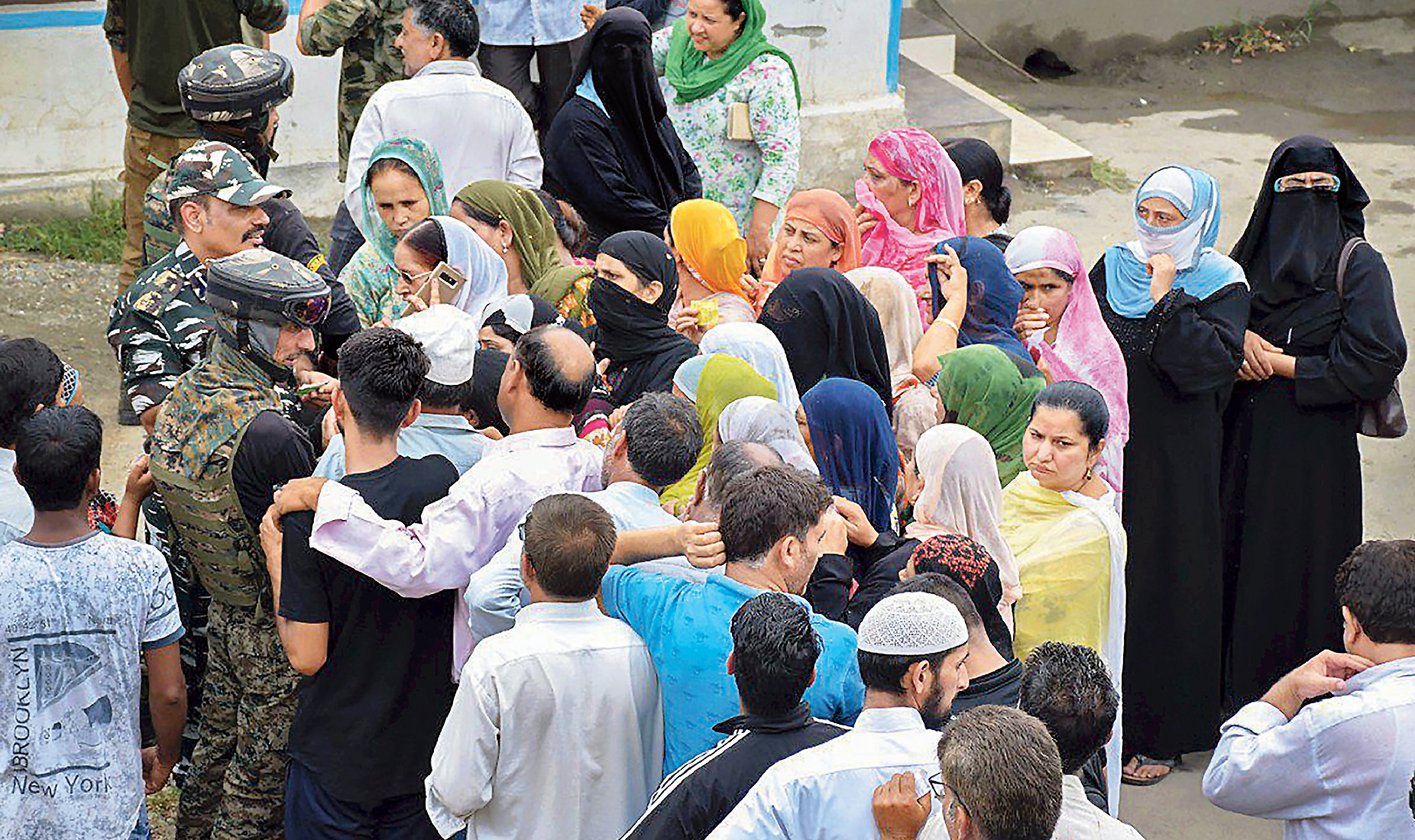 On the streets of Srinagar, security officers tied black bandannas over their faces, grabbed their guns and took positions behind checkpoints. People glanced out of the windows of their homes, afraid to step outside. Many were cutting back on meals and getting hungry.

A sense of coiled menace hung over the locked-down city and the wider region on Saturday, a day after a huge protest erupted into clashes between Kashmiris and Indian security forces.

Shops were shut. ATMs had run dry. Just about all lines to the outside world — the Internet, mobile phones, even landlines — remained severed, rendering millions incommunicado.

Correspondents for The New York Times got one of the first inside views of life under lockdown in Kashmir and found a population that felt besieged, confused, frightened and furious by the seismic events of this week.

People who ventured out said they had to beg officers to cross a landscape of sandbags, battered trucks and soldiers staring at them through metal facemasks. Several residents said they had been beaten up by security forces for simply trying to buy necessities like milk.

India’s swift and unilateral decision on August 5 to wipe out Kashmir’s autonomy significantly raised tensions with its archrival, Pakistan, which also claims parts of Kashmir. Anything dramatic or provocative that happens here — and India’s move was widely seen as both — instantly sends a jolt of anxiety across this entire region.

On Friday afternoon, witnesses said tens of thousands of peaceful demonstrators were moving through the streets of Srinagar, chanting freedom slogans and waving Kashmiri flags, when Indian forces opened fire.

The huge crowd panicked and scattered. Sustained bursts of automatic weapon fire could be heard in videos filmed during the protest, and at least seven people were wounded, hospital officials said, some sprayed by buckshot in the eyes.

Afshana Farooq, a 14-year-old girl, was nearly trampled in the stampede.

“We were just marching peacefully after prayers,” said her father, Farooq Ahmed, standing over her as she lay shaking in a Srinagar hospital bed. “Then they started shooting at us.”

No one disputes that Kashmir needed change. Tens of thousands of people have been killed here and the economy lies in ruins.

In the Valley, nearly all of about 50 Kashmiris interviewed said they expected India’s actions to increase the sense of alienation and in turn feed the rebellion.

Elders in several rural areas reported that dozens of young men had already disappeared from their communities, often a telltale sign of joining the insurgency.

In this Friday, August 9, 2019, photo, Kashmiri women shout slogans during a protest march in Srinagar.
(AP)

Officials in New Delhi circulated photos on Saturday that showed open fruit markets and crowded streets, saying the valley was returning to normal. But security personnel in Kashmir said large protests kept erupting, including on Saturday.

“At any point day or night,” said Ravi Kant, a soldier based in the town of Baramulla, “whenever they get a chance, mobs of a dozen, two dozen, even more, sometimes with a lot of women, come out, throw stones at us and run away.”

“People are so angry,” he added. “They are unrelenting and not scared.”

Tens of thousands of troops from the army, the Central Reserve Police Force and the Kashmiri state police have been deployed in just about every corner of the Valley. In some villages, even remote ones, a soldier was posted outside the gate of each family’s home.

The difficulties of negotiating such a tight security cordon are compounding the stress. Shamima Bano, a middle-aged mother, broke into tears the instant she heard her son’s voice over the phone.

“Are you alive?” she cried.

For hours, she had waited in a line of 400 people to use the one phone that the authorities opened, at a government office in her neighbourhood. Her college-age son was in the Indian city of Mumbai, about to go into surgery, she said.

At the Lala Ded hospital, sick people had travelled more than a day to get here, only to find a skeleton crew. Many doctors couldn’t get to work. Many patients were curled up on the floor.

“It’s a living hell here,” said Jamila, a doctor who goes by one name.

Kashmiris said that of all the crackdowns they had lived through, this was the worst. A spokeswoman for India’s home ministry said on Saturday she would answer questions about the complaints but had yet to provide a response.

Kashmiris are desperate to get information. But with the Internet out and phones and television service disrupted, space has been created for the wildest rumours. A few small Kashmiri newspapers have continued unbowed, putting out thin paper editions — four pages, maybe eight — that are carefully passed hand to hand throughout the day.

Copies used to cost Rs 3. Now they go for Rs 50. There is no digital version.