The budget was somewhat lacklustre but on expected lines

Broadly the income tax rates have not been tinkered with, barring the surcharge for wealthy people earning more than Rs 2 crore 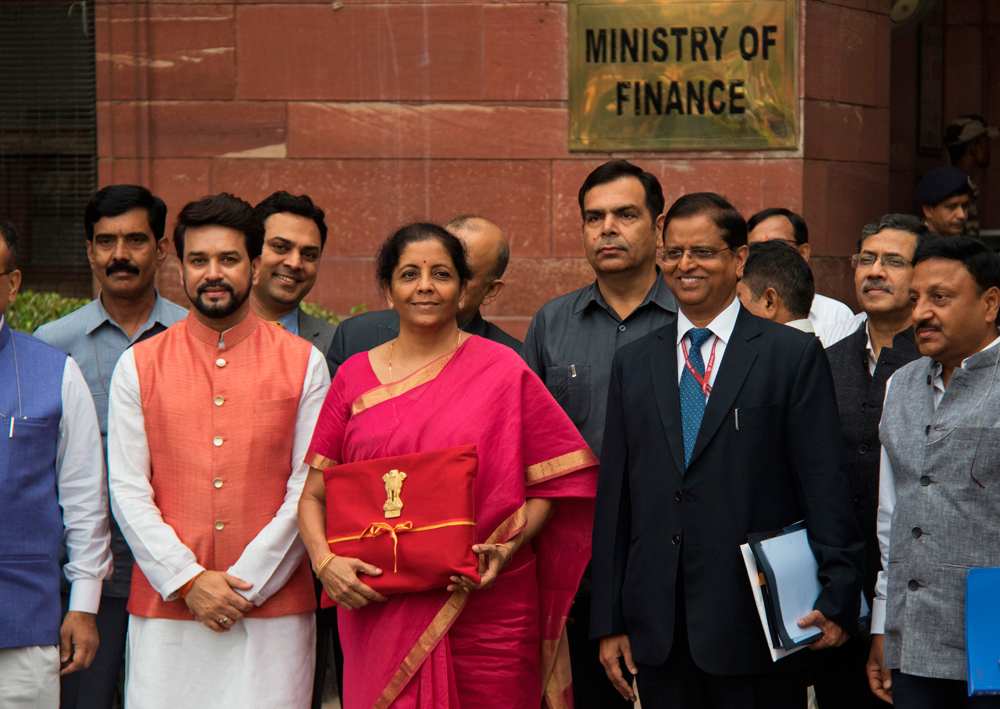 Nirmala Sitharaman and junior finance minister Anurag Thakur outside the finance ministry before proceeding towards Parliament to unveil the annual budget on Friday. In terms of fiscal discipline, the budget maintained a fiscal target of gross fiscal deficit of 3.3 per cent of GDP
AP photo
Partha Ray   |   Published 07.07.19, 01:45 AM

The hype about the Union budget of India is perhaps one of the colonial relics of the economy that was rehabilitated in a period of media boom. After all, there is no reason for which government policy announcements need to wait for a particular day of a year. As the budget is fundamentally an income-expenditure statement of the government, in any country with a stable tax regime and expenditure patterns, households and corporate organizations tend to focus their attention primarily on government borrowing (or what is formally known as fiscal deficit). Corporate bodies look at the fiscal deficit to find out the possibility of the crowding out of private investment, and financial market players watch it for its implications on yields on government securities. But India is different. The expectations from the budget in India smack of the prayers of the devotees of the Union government in the spirit of the Sri Sri Chandi stotra, “Rupam dehi jayam dehi yasho dehi dvisho jahi,” loosely translated as: grant me beauty, victory, fame and destroy all hostility.

What was the macroeconomic context of the Union budget? The broad message from this year’s Economic Survey is as follows. First, India has experienced a sharp deceleration of economic growth over all the four quarters of 2018-19, primarily dragged down by low growth in agriculture. Second, growth continues to be driven by consumption (both private and public) with the share of investment in the gross domestic product being less than one-third. Third, inflationary trends have been subdued — although one is uncertain about how much of it is on account of good policy (for example, inflation targeting) vis-à-vis good luck (like low global oil prices). Third, in the external sector, current account deficit (that is, the difference between imports and exports of goods and services) has experienced some widening, but with foreign exchange reserves over $400 billion, it still appears to be manageable. Fourth, there is a decline in bad loans of the banking sector (or what is formally known as ‘non-performing assets’) from 11.5 per cent (at end March 2018) to 10.1 per cent (at end December 2018). Finally, with the possibility of a trade war looming large, the country could face a hostile global scenario. In this backdrop, the Economic Survey noted, “Outlook of Indian economy appears bright with prospects of pickup in growth in 2019-20 on back of pick up in private investment and robust consumption growth.” Against the political context of an unambiguous mandate in favour of the current government, is a vision of making India into a $5 trillion economy by 2025 in sync with today’s budget announcements?

But there are some novelty elements as well. Illustratively, the finance minister has announced that the government is contemplating organizing an annual Global Investors Meet in India, using the National Infrastructure Investment Fund as the anchor, to get different sets of global players — top industrialists or corporate honchos, top pension or insurance or sovereign wealth funds and top digital technology or venture funds. It has also been proposed that a social stock exchange be created for listing social enterprises and voluntary organizations working for the realization of a social welfare objective so that they can raise capital as equity, debt or as units like a mutual fund.

Notwithstanding such novelties, will the budget kick-start the investment cycle? One of the factors affecting corporate investment in recent times has been the lukewarm interest of the financial sector. Banks were saddled with bad loans and in recent times funding from the non-banking financial sector has also dried up. The budget has allocated Rs 70,000 crore of capital infusion to public sector banks. For purchase of high-rated pooled assets of “financially sound NBFCs, amounting to a total of Rs 1,00,000 crore during the current financial year”, the government will provide one-time six months’ partial credit guarantee to public sector banks for first loss of up to 10 per cent. As infrastructure is a crucial element of boosting private investment, the budget estimates an investment requirement averaging Rs 20 lakh crore every year and proposed the setting up of a Credit Guarantee Enhancement Corporation and an action plan to deepen the market for long term bonds. Are these the optimum? Or, are these too little, too late? Only time can tell.

Will the budget create employment across the country? Performance of the MSME sector and education and skill formation are intimately interlinked with this issue of employment generation. Apart from continuing with the existing schemes, the budget has proposed the establishment of a National Research Foundation to fund, coordinate and promote research. The budget has also allocated Rs 350 crore at two per cent interest subvention for all the GST registered MSMEs for fresh or incremental loans. Considering the huge problem of unemployment in the economy such measures may not be sufficient.

What is there in the budget for the middle class? In spite of the huge expectations, broadly the income tax rates have not been tinkered with (barring the surcharge for wealthy people earning more than Rs 2 crore). On the excise duty front, the budget proposed an additional excise duty and road and infrastructure cess of one rupee on every litre of petrol and diesel, which may create a hole in the pocket of the common man.

Noting that India’s sovereign external debt to GDP is among the lowest globally, the budget mentioned that the government would start raising a part of its gross borrowing programme in external markets in external currencies. It would only mean that the government is rethinking the contours of our careful and calibrated approach to capital account convertibility that has served us well. In the current subdued global scenario it may not be a good idea.

In terms of fiscal discipline, the budget maintained a fiscal target of gross fiscal deficit of 3.3 per cent of GDP. While it may make the financial market players happy, there are sceptics who think in view of the low nominal GDP it may be hard to achieve.

Where does this budget lead us? In the usual lingo of a two-handed economist, the budget has been somewhat lacklustre but on expected lines. It did not propose any big-bang reform but focused on programmes already in place. Will it make India a five-trillion-dollar economy? Will it be capable of turning the bulge in our youth population into a demographic dividend? The third view of the two-handed economist hints that answers to such questions will perhaps lie in the devil of details of fine prints. But today the finance minister played the role of the goddess in the spirit of responding to the devotees chanting the Sri Sri Chandi stotra.