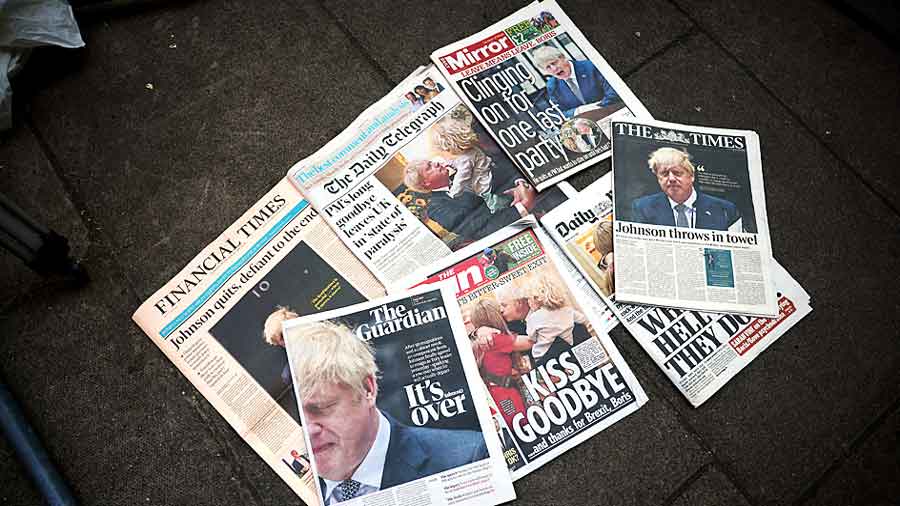 In 2018, two Harvard professors published a book called How Democracies Die. Prompted by the surprising ascendancy to the American presidency of Donald Trump, the book argued that even old, established democracies should not take the continuance of their political system for granted. For a demagogue appealing to the basest instincts of voters and with scant disregard for the independence of institutions could quickly undermine democratic functioning.

Recent events in the United Kingdom prompt the thought that a sequel to that book could perhaps be written with the title,  How Democracies Survive. This would take as a principal case study recent events in the United Kingdom where, a mere two and a half years after leading his Conservative Party to an emphatic victory in a general election, Prime Minister Boris Johnson has had to resign from office.

British general elections are about two (or more) parties contesting against one another. They are rarely presidential in nature. And yet, the election of December 2019 was won by the Conservatives largely on the basis of Boris Johnson’s charisma and popularity. He was a witty speaker, whose tousled hair and shambolic mode of dress apparently endeared him to ordinary British voters. His party won its highest number of seats since 1987, and its highest share of the popular vote since 1979. Its main opponent, Labour, won a mere 202 seats, their lowest since 1935. Working class districts in the North that had voted Labour forever had gone over almost en masse to the Conservatives.

Boris Johnson’s success at the polls had propelled him to a position of dominance in his own party. Among first-time Tory MPs especially, there was a cult of BoJo in place, placing the leader above criticism. Johnson had clearly been influenced by Trump’s success, and his politics was in part inspired by the American demagogue. He disregarded the party machinery to appeal directly to the masses. He relied for counsel more on a set of unelected advisers than on his ministers. He talked grandly of making Britain great again.

When he led his party to victory in the 2019 elections, Boris Johnson was just fifty-five. By way of comparison, he was eight years younger than Narendra Modi when Modi became prime minister of India, and a full fifteen years younger than Donald Trump when Trump became president of the United States of America. In December 2019, Johnson would have been thinking perhaps of enjoying two, even three, terms in office. He was young, and he had his party and the electorate at his command. And the main Opposition party, Labour, was in disarray.

And yet, halfway into his term, Boris Johnson has had to resign as prime minister — not of his own volition, but in disgrace. How did this happen? This is because he was held accountable for his actions by the still-functioning institutions of British democracy.

Such as the press. Prior to entering politics, Johnson had — not unlike Trump — a reputation for being economical with the truth. His tendency towards dissembling did not matter much when he was mayor of London or even foreign secretary, but as prime minister he deserved — and got — more rigorous scrutiny from an independent media. Thus, when it came out that the prime minister was partying with his staff during Covid lockdowns for the public that he had ordered, his transgressions were widely reported in newspapers and on television.

In some less well-functioning democracies (such as ours), the lies and deceit of the prime minister might not have been so closely examined by newspapers, radio, and television. But while there are papers in Britain that slant towards Labour and those that are of a Tory bent, fortunately there is no ‘godi media’ in that country, taking its instructions from politicians in power.

Once the press had documented the British prime minister’s breaches of the law and of propriety, the matter was vigorously taken up in that country’s Parliament. In matters large and small, there are real debates conducted in the British Parliament, unlike in our country, where important bills are passed in a matter of minutes, and where the prime minister is never asked to directly answer questions posed by the Opposition.  In the UK, on the other hand, the custom of Prime Minister’s Questions allowed the new Labour leader, Keir Starmer, to relentlessly quiz Boris Johnson, who was given the opportunity to defend himself, though not always adequately or convincingly.

Though he may lack charisma, Starmer is clearly more focused and hardworking than his predecessor, Jeremy Corbyn, and with a keen interest in policy. Labour’s disposal of Corbyn after he led his party to two successive election defeats and its desire to make itself competitive once more are in striking contrast with the inability of the main Opposition party in India to get rid of its entitled and incompetent First Family. Rahul Gandhi is a proven failure as a vote-catcher (he even failed to win re-election in the family pocket borough), and, yet, he seems set to resume the presidency of the Congress, once his mother, who has been ‘interim’ president of the party for some three years now, decides he can. While Labour, perhaps belatedly, recognised that having Jeremy Corbyn as its leader only worked to the advantage of the Conservatives, the Congress apparently will never recognise that Rahul Gandhi remains its greatest gift to Narendra Modi and the Bharatiya Janata Party. (As this column was being drafted, news came in that Rahul Gandhi had gone on another holiday in Europe, further proof that he remains the BJP’s most reliable political ally).

In the United Kingdom, exposés in the press about the prime minister’s misconduct, when followed by these debates in Parliament, compelled Boris Johnson to institute an official enquiry. Once entrusted with the responsibility, the British police and civil service conducted this enquiry with exemplary efficiency and did not shirk from documenting the misdeeds of politicians in power. Again, the comparison with India is telling. The Modi government won’t even refer important bills to a Parliamentary Committee, let alone agree to official enquiries into lapses in governance. Even if it did, the Indian civil service under Modi is too timid and risk-averse to ever place on record anything that might show the prime minister in poor light.

As these enquiries were being conducted, and as these debates escalated in the press and in Parliament, Boris Johnson sought to bypass democratic procedure by presenting himself as an international statesman enhancing Britain’s image in the world. He made trips to Kyiv, cynically using the Russian invasion of Ukraine to claim that he was on the side of the oppressed. He came to India, boasting of a trade deal he would forge with a man who said he considered Johnson his khas dost, his special friend.

Through these publicity-seeking measures, Johnson was seeking to shore up support within his own party. This, however, proved impossible. Faced with irrefutable evidence of their leader’s deceitful behaviour, as documented by the press, showcased in Parliament, and certified by an impartial police and civil service, an increasing number of Conservative MPs began deserting the man who had helped win them the general election of December 2019. A confidence vote among party MPs was called, which Johnson won, but not authoritatively. Reading the signs, members of the cabinet began tendering their resignations, and the prime minister, much against his will, had finally to tender his own resignation too.

Boris Johnson had sought to construct a personality cult around himself in the Conservative Party, à la Trump and the Republicans and Modi and the BJP. Unlike them, he failed. This is in part because the sceptical British do not go in much for hero-worship — they even dumped Winston Churchill after the Second World War — and in larger part because Conservative MPs were now willing to make it known that Johnson was unfit to be their party leader or prime minister. Again, the contrast with India is depressingly stark. Not one of the BJP’s 300-odd MPs has the courage or independence to even mildly criticise the prime minister in a party meeting, even with regard to such disastrous policies as demonetisation or the first Covid lockdown. On the other hand, they seek to outdo one another in sycophantic praise of their Great Leader in public.

The defenestration of Boris Johnson is a tribute to the institutions of British democracy. By functioning as they should, the media, Parliament, the civil service, the Opposition and the ruling party have all helped the British political system to survive and renew itself. In our country, on the other hand, these five institutions are all malfunctioning or compromised. Therefore, much as we Indians may scold and chastise the British for their imperial past, there may yet be lessons for us in how they conduct their democratic present.