In the absence of strange allies, Indian politics could have been reduced to dour monopolies, the kind that the Congress once enjoyed and the BJP now desires 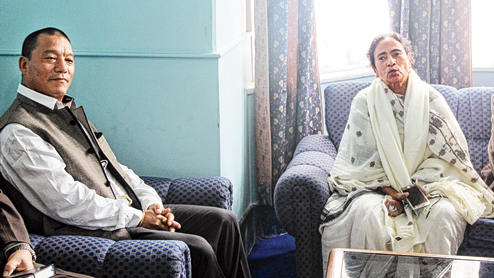 Indian politics, metaphorically speaking, is a bed on which rests strange bedfellows. The coming together of parties with competing ideologies has been a singular phenomenon in this nation’s political history. The Communist Party of India (Marxist)’s willingness to fight the forthcoming assembly elections in Bengal by joining forces with secular parties, including the Congress, must be seen in the context of such a continuum. The CPI(M) and the Congress, while burying the hatchet in Bengal, remain at each other’s throats in Kerala. This selective — strategic — unity has been ridiculed by their rivals: the Trinamul Congress and the Bharatiya Janata Party, the two other contenders in the fray in Bengal, dismiss this union as opportunistic. But the truth of the matter is that no national party — not even the BJP — can resist tactical, temporary, solidarity. The BJP did not hesitate to embrace the Peoples Democratic Party in Kashmir even though the two outfits, on account of their ideologies, do not see eye-to-eye on a number of issues. In Bengal, the BJP had allied with Bimal Gurung and his faction of the Gorkha Janmukti Morcha even though the party’s central leadership remained non-committal to Mr Gurung’s principal demand of Gorkhaland. The primary reason for these seemingly confounding alliances is that regional politics and its demands are, more often than not, significantly different from those that propel politics at the national level in a vast federation of diverse states.

The other explanation is that morality is increasingly becoming expedient to the political project. This malleability makes it easier for political parties to prioritize strategy over ideology. This is not to suggest that the voter is always receptive to new-found chemistry. The Samajwadi Party and the Bahujan Samaj Party were left with egg on their faces after they jointly fought the parliamentary elections of 2019. But the electorate can be as fickle as politicians: the Rashtriya Janata Dal and the Janata Dal (United), adversaries in 2020, had been rewarded with the throne of Bihar in 2015. Political partnerships between rivals add to the depth and the unpredictability of democratic systems. They also have the potential to check hegemonies. In the absence of strange allies, Indian politics could have been reduced to dour monopolies, the kind that the Congress once enjoyed and the BJP now desires.