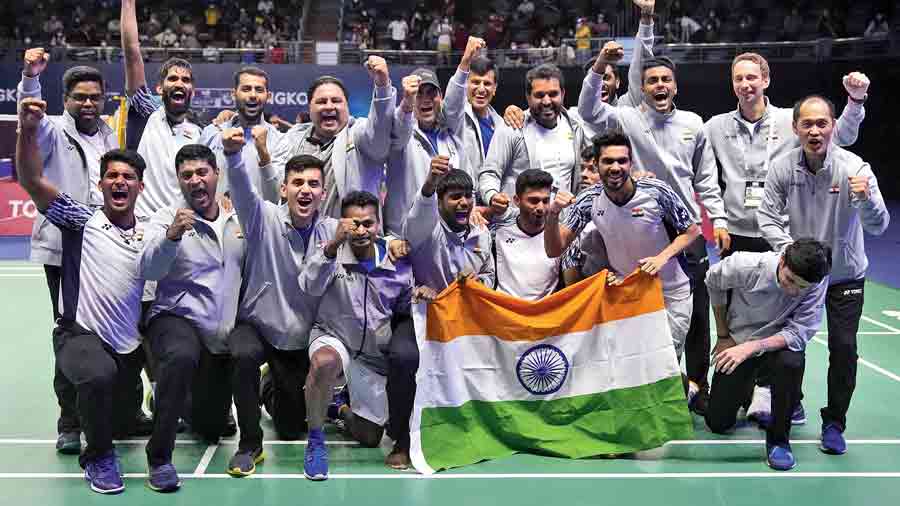 The doubting Thomases can rest easy: India’s international sporting achievements are no longer limited to cricket. The triumph of the men’s badminton team — it won its maiden Thomas Cup, the equivalent of the World Cup in badminton — has plugged several gaps. Men’s badminton has had to wait an excruciatingly long time to taste glory: the wizardry of Prakash Padukone and Pullela Gopichand at the All England Open Badminton Championships came decades ago. Meanwhile, the ladies had stolen the gentlemen’s thunder with Saina Nehwal and, later, P.V. Sindhu, achieving glory. The supermen — Lakshya Sen, Kidambi Srikanth, H.S. Prannoy, Chirag Shetty and S. Rankireddy — have now caught up with the superwomen by beating a formidable Indonesian team. Comparing this feat with what Kapil’s Devils achieved at Lord’s may not be erroneous, considering the mercurial nature of the opponents on both occasions. The players deserve their moment in the sun: as do their mentors. Mr Gopichand, the chief national coach, whose academy has played an instrumental role in the rise of many a player, was ably assisted by M.S. Ullah and the staff without any rancour. Unlike Narendra Modi’s government, the Indian men — they did not need a foreign coach to hone their skills — have justifiably kindled the dream of an Atmanirbhar Bharat.

Rewards are, expectedly, pouring in. The Union sports minister has announced cash awards. The government must now take measures to help badminton spread its wings. These should include modernising infrastructure, building more academies, especially in the hinterland, running programmes to scout talent and turning the sport lucrative for youngsters. The template followed by the Board of Control for Cricket in India to help the gentleman’s game reach the grassroots can serve as a plausible model.