RELIGION INC. - ?Police action against the Puttaparthi godman is overdue? 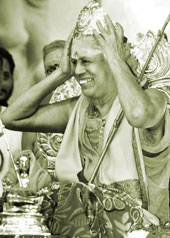 Basava Premanand watched television images of Jayendra Saraswati, the seer of Kancheepuram, escorted by police to jail, with some interest. Finally, the 75-year-old activist thought, the government and police had woken up. ?Let?s hope this is a beginning. There are other big names the police still need to catch,? says Coimbatore-based Premanand, who has spent decades debunking ?gurus? and their ?miracles?.

Premanand, who?s been honoured by the government with its highest award for the promotion of scientific values among the public, is among activists spearheading a campaign against religious and spiritual heads engaged in illegal and unsavoury activities. There is a quiet sense of celebration among the activists, even though the Kancheepuram seer?s complicity in a murder case is still to be established.

But the very fact that the Tamil Nadu police have arre-sted one of India?s most revered religious leaders underlines what the activists have been stressing for long ? that nobody is above the law.

Clearly, there is intrigue ? murder, illicit sex or other crimes ? in some religious groups, just as in any section of society. But the rationalists ? some have dubbed them the ?gurubusters? ? believe that the intermingling of religion and money has embroiled many spiritual institutions in sexual scandals, tug-of-wars for temple wealth or land, and allegations of murder. But spiritual organisations ? old foes of rationalists ? dismiss the allegations of wrondgoing as baseless. There is money, they admit, but it comes from voluntary donations and is used for charity.

The money raked in by India?s religious institutions runs into hundreds of crores. According to one survey, the Tirumala Tirupati Sanstham recorded an annual turnover of Rs 530 crore, of which Rs 180 crore was cash drop-ped into the temple hundi. The temple has a reserve of five tonnes of gold and Rs 560 crore in fixed deposits. The Ramakrishna Mission had an annual income of Rs 150 crore, while the Shirdi Sai Baba Sansthan in Maharashtra earned Rs 60 crore.

Though there are several organisations where financial transactions are routinely audited, some have had serious allegations of irregularities levelled against them. And academics say crime and corruption tend to occur when there is great opportunity with little risk of exposure ? and religion is an issue that few question. ?Religion may then provide the perfect cover for exploitation,? says Dr Margaret Beare, director of the Nathanson Centre for the Study of Organised Crime and Corruption at York University in Toronto, Canada.

Political patronage, the activists stress, is one of the reasons why allegations of illegal activities remain uninvestigated. ?Religious institutions in India have grown to intimidating proportions. Their size and the political patronage they get makes it hard to question their activities,? says Dr Mathew Chandrinkunnel, director of the Centre for Study of World Religions in Bangalore. ?Backed with money and power, ?godmen? think they?re superhumans and build empires.?

In New Delhi, president of the Indian Rationalists Association, Sanal Edamaruku, has amassed what he says are tidbits about unsavoury activities of sadhus and swamis over the past many decades. ?They wield influence through politicians,? says Edamaruku, fishing out several photographs that show a man with flowing black hair and long beard standing next to four former Prime Ministers and two Presidents. ?This is Swami Sadachari in his heyday before he was arrested for running a brothel and blackmailing businessmen,? he says.

Edamaruku says many ashrams have been dogged by intrigue and infighting. He cites the case of Mahant Desahari Giri, the head of one of 14 akharas who was abducted in 1995 and never seen again. A decade ago, the head of an ashram in Hardwar was shot dead. A few years ago, a Swami Premananda was arrested in Tamil Nadu on charges of murder.

In 1971, Prabhat Ranjan Sarkar, the railway accounts clerk who founded the Ananda Marg, a socio-religious group, was arrested on a murder charge ? but was acquitted in 1978 by the Patna High Court. ?We have been framed many times, but our innocence was always proven in the end,? says Kalyaneshvarananda Avadhuta, a senior Marg leader and its spokesperson. ?It?s unfortunate that the work we do for the poor is not highlighted.? The Marg has 2,500 units across the country run by 3,500 avadhutas, monks in saffron with long hair and flowing beards. It runs a large number of schools, clinics and homes for destitute children.

Rivalry within the Marg erupted during the 1990s, its members divided into two groups ? the Bihar and Bengal camps, each trying to wrest control of the organisation and culminating in a bloody clash between the rivals in Purulia last year.

One other religious group that is as much revered as questioned is the Sathya Sai Baba ashram in Puttaparthi. Rationalists say authorities have refused to make any move against the Sai Baba despite murders in the Puttaparthi ashram about a decade ago and repeated allega- tions against him of sexual abuse. In September 2000, the UNESCO pulled out of an educational conference at Puttaparthi saying it was concerned about ?allegations of sexual abuse involving youths and children levelled at the leader of the movement?.

Says Narendra Nayak, president of the Federation of the Indian Rationalists Associations: ?Police action against the self-styled godman from Puttaparthi is overdue.?

But the allegations haven?t affected the institutions that Sathya Sai Baba has created. A Sai Baba industry thrives around Brindavan Ashram in Whitefield on the outskirts of Bangalore. Shops sell Sai Baba posters and postcards, saffron clothes, incense sticks, and CDs of Sai Baba?s sermons. Brindavan Ashram, a five-acre complex with a barricaded dome-shaped building girdled by a tree-lined walkway amidst landscaped gardens, is Sai Baba?s summer capital. The complex houses a degree college, an auditorium and an old-age home. Nearby, the Sri Sathya Sai hospital, a building that could pass off as a clone of the Mysore Palace, offers world-class cardiology and neurology services. ?Both education and treatment is completely free,? says Anil Bhatia, custodian of the Brindavan Ashram.

Bhatia says that the allegations against Sai Baba of sexual abuse are just ugly rumours. ?Money matters are absolutely transparent at the Ashram,? he says. ?All earnings are spent on social work.? He says that the murders in Puttaparthi were the ?result of rivalry in the ranks,? and asserts that Sai Baba had nothing to do with them.

Controversy has also singed the Siddhivinayak Ganesh Temple in Mumbai which attracts the high and mighty ? from cricket star Sachin Tendulkar and soap queen Ektaa Kapoor to chief ministers. A petition in the Mumbai High Court last year charged the temple?s trust with arbitrary disbursement of funds to a voluntary organisation run by a minister.

The petition filed by Kewal Semlani, an activist involved in the right-to-information campaign, says the trust had approved Rs 86 lakh to Dada Undalkar Smarak Samiti, an institution run by then law minister Vilaskaka Patil Undalkar. The money was disbursed in just two days. But a Pune-based voluntary organisation had to wait three years to receive a grant of Rs 15 lakh. ?The trust had no proper mechanism to release financial assistance,? says Semlani. In June this year, the Mumbai High Court agreed with Semlani?s arguments and ordered a three-member advisory committee to examine the trust?s disbursements in the last five years and check whether the funds were used for the purpose they were actually sanctioned.

The Siddhivinayak Trust is also currently locked in a land acquisition case in the Mumbai High Court where a garage- owner has accused the trust of forcibly taking over an adjacent plot. In his petition, the owner of Sadanand Garage alleges that the temple trust armtwisted the Vilasrao Deshmukh government into issuing a directive to acquire the plot. The temple had announced that it would donate Rs 10 million to the chief minister?s fund to help the Gujarat earthquake rehabilitation, but threatened to hold back half the amount unless the government issued the directive.

Activists say the manner in which the Maharashtra legislature passed a bill to bring the state?s richest temple, the Shirdi Sai Baba Sansthan, under government control reveals the tug-of-war between politicians to control temple money. While the Siddhivinayak Ganesh temple is already under government control, Congress and Nationalist Congress Party (NCP) politicians wanted to bring the Shirdi shrine under the government. But a section of NCP politicians from law minister Govindrao Adik?s constituency was trying to stall the move.

The Bill sailed through the Legislative Council with remarkable speed, but governor Mohammed Fazal directed the government to incorporate guidelines framed by the Mumbai High Court in the Semlani vs Siddhivinayak Trust case in the rules for the Shirdi Trust to ensure appropriate use of its funds. Nevertheless, government officials are surprised by rules which say that the executive officer who oversees the trust should be a bureaucrat above the rank of a deputy collector and should be a devotee of Shirdi Sai Baba. ?I?m shocked that such an Act was passed by the legislature. This amounts to giving a religious slant to the bureaucracy,? says a top serving bureaucrat. But politicians have also vied with each other to bag posts as trustees.

The Shirdi Trust, for instance, has current Congress MLA from Shirdi, Radhakrishna Vikhe-Patil as a trustee, NCP?s ex-MLA Shankarrao Kolhe as vice- chairperson, and Congress MLA Jayan Sasane as the chairperson along with a number of businessmen. The treasurer of the Siddhivinayak Trust, Dr Vijaya Patil, has a close association with the former law minister Govindrao Adik.

Activists say one way of cleaning things up would be by infusing transparency into financial matters by routine public audits of the earnings by the religious institutions. At the moment, they say, tax exemptions given to such institutions and the absence of public audits on the earnings help keep their activities in the dark. ?Many individuals and institutions continue to feed on people?s fears and gullibilities for glory and for money,? says Nayak. But with the arrest in Kancheepuram last week, Premanand in Coimbatore says he?s experienced a flicker of hope. ?The truth will always come out,? he says.