Cervantes' Don Quixote charged at windmills, imagining them to be ‘enemies’. Mr Modi conjures up admirers. 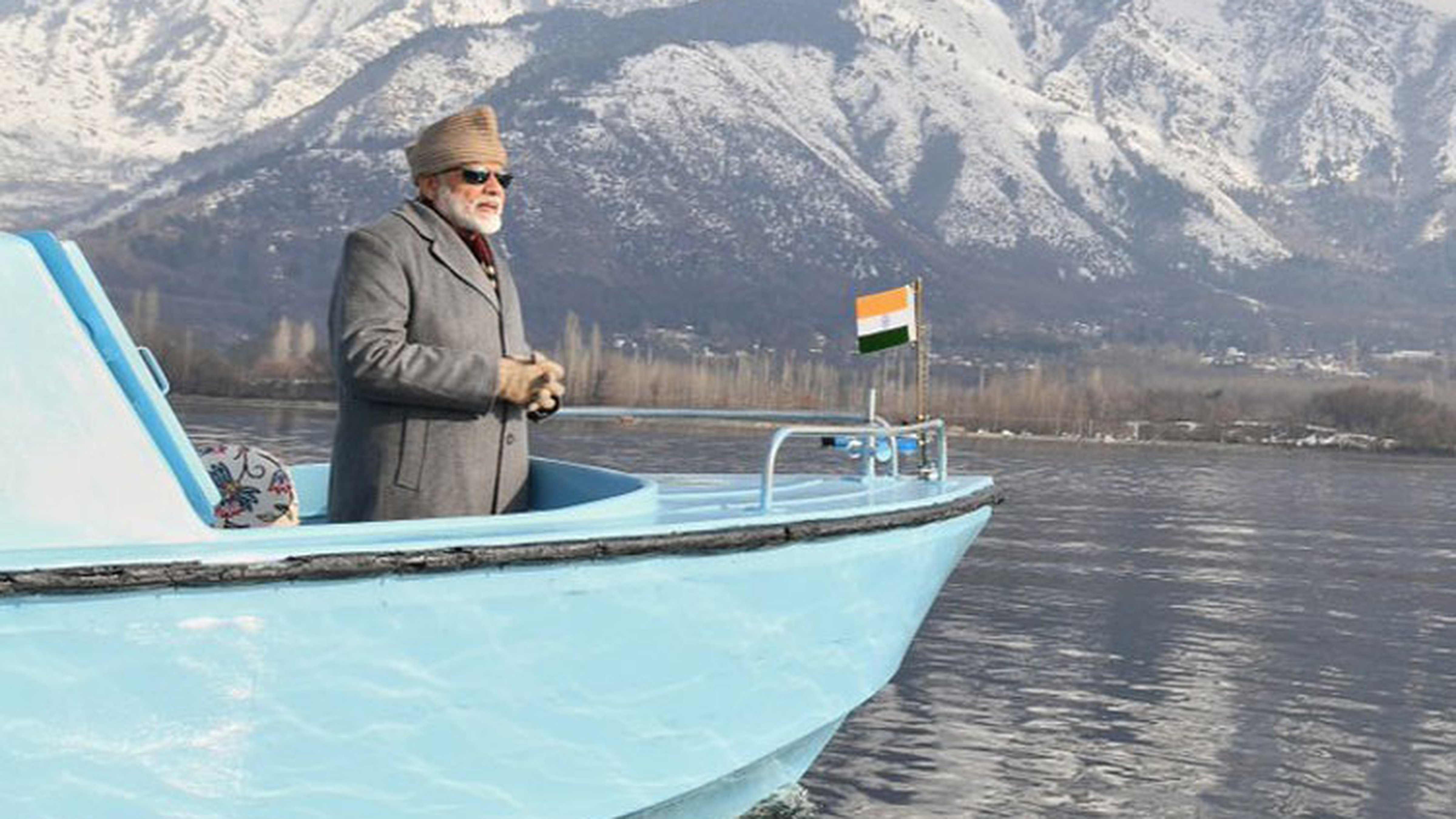 Narendra Modi had allegedly been looking at mountains, not civilians, during a boat ride in troubled Kashmir — yet, he could not help waving at them. Perhaps the man did, for a moment, believe that the mountains, unlike a disenchanted people, would wave back at him
Source: @narendramodi on Twitter
The Editorial Board   |     |   Published 10.02.19, 03:04 AM

It is not quite like the chicken-and-egg story. The puzzle, in this case, has been resolved — the reel can inform the real. Take, for instance, the idea of reincarnation, an underlying theme in puranic tales as well as popular cinema. It is entirely plausible that Don Quixote, Cervantes’s ingenious nobleman from La Mancha, has been reborn as Narendra Modi. Of course, the Indian prime minister does not share all the spots of Cervantes’s creation. Don Quixote was a nobleman; the prime minister seldom tires of reminding those who still care to listen to him that he hails from humbler roots. The man from La Mancha was kind enough to accommodate a sidekick. Mr Modi abhors company: how else can he stride upon the stage, colossus-like, all by himself? But the two men — one real, the other imagined by Cervantes — may have bonded well in an alternative universe. Don Quixote charged at windmills, imagining these harmless contraptions to be ‘enemies’. Mr Modi conjures up admirers. He had allegedly been looking at mountains, not civilians, during a boat ride in troubled Kashmir — yet, he could not help waving at them. Perhaps the man did, for a moment, believe that the mountains, unlike a disenchanted people, would wave back at him.

Mr Modi’s critics, unfortunately, are far more modest in their appraisal of the prime minister. They allege that the nation’s watchman — much like the fictional Spaniard — is only good at building castles in the air. Is that the reason why New India, the cynics insist, resembles a mole hill rather than a mountain? Their cynicism cannot be dismissed easily, much to Mr Modi’s chagrin. In a combative speech in the Lok Sabha — is not the prime minister perpetually in election mode? — Mr Modi thundered about the progress that India has made under his watch. He claimed that there has been tremendous improvement in sanitation coverage, the provision of connections for cooking gas, even employment.

But then even a magician can suffer from telling Freudian slips. The prime minister let it slip in the course of his speech that a ‘mahamilavat (grand adulterated) coalition’ could succeed his government. Why? Is it because, as the Prime Minister’s Office tweeted later, committing a gaffe, Mr Modi has ended up destroying institutions? The prime minister’s opponents might want to add a few more things to Mr Modi’s Annihilation List: India’s inclusive social fabric, the economy, the agrarian sector, foreign policy, the environment. Little wonder then that Mr Modi is hard at work, building, not a temple as some of his radical admirers want but, airborne castles.

But the paths of Mr Modi and his previous avatar diverge from here on. Don Quixote is looked upon as a tragic figure in a post-chivalric world. Given his penchant for eroding constitutional ideals and institutions, Mr Modi is more likely to be remembered as the creator of a contemporary, Indian tragedy.

Even mountains wave at Modi