Even mountains wave at Modi 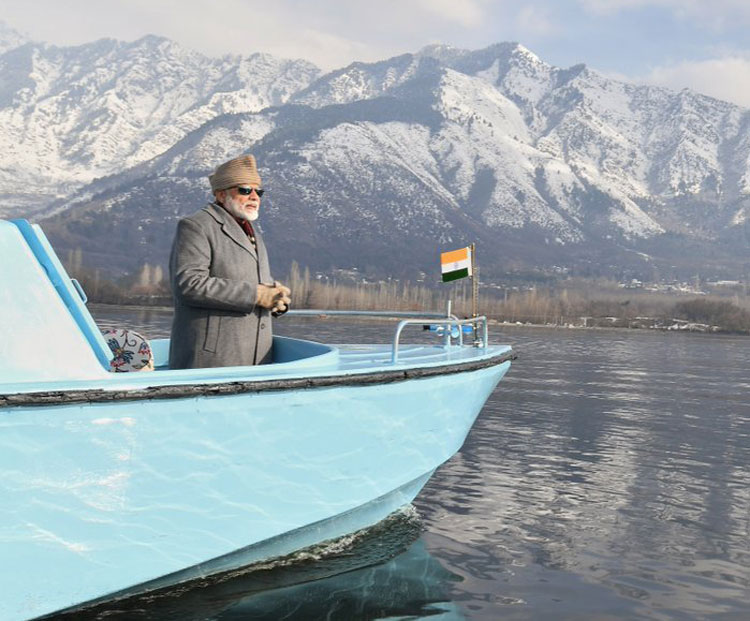 Prime Minister Narendra Modi was seen waving passionately from a boat during a Dal Lake cruise on Sunday. On Monday, the Valley was still in the grip of a wave of laughter.

A video shot by a news agency, which accompanied Modi during his one-day Kashmir trip and posted it on its Twitter handle, shows the Prime Minister enjoying a boat ride in the Dal Lake. But people are asking who he was waving at.

The only other people seen in the 64-second video are the security men, some in Modi’s boat and the rest in nearby vessels. No civilian can be seen anywhere.

Modi stands at the front of his boat and seems to be enjoying the lake’s serene surroundings and the view of the snow-packed Zabarwan hills. He then starts waving in all directions, as though to appreciative crowds.

A tweet from former chief minister Omar Abdullah dripped with sarcasm: “This camera person has done the Hon PM a huge disservice by not showing all the people furiously waving back because there is no way the PM would be waving at an empty lake.”

This camera person has done the Hon PM a huge disservice by not showing all the people furiously waving back because there is no way the PM would be waving at an empty lake. https://t.co/YJoEfX8DJ3

Omar’s rival Mehbooba Mufti posted a meme of a waving hand and quipped that Modi was waving at the BJP’s “countless imaginary friends” in Kashmir. Mehbooba’s party colleague and former minister Naeem Akhtar captioned the photo “the lone voyager”.

“This will become the defining picture of @narendramodi the most popular prime minister of India for his inability to fulfil his agreement with Kashmir,” Akhtar tweeted, apparently alluding to his party’s erstwhile “agenda of alliance” with the BJP.

For the those who are asking , the 👋 is for BJPs countless imaginary ‘friends’ in Kashmir. https://t.co/l0YPq2oiVy

Police sources said no civilian movement had been allowed on the road flanking the Dal Lake over a stretch of several kilometres but would not explicitly say whether Modi was waving at anyone, given the delicate nature of the subject.

A former House Boat Owners Association president, who declined to be named, said the security was so tight that “not even a bird was allowed to fly”.

“How could there have been any civilian around when for two-and-a-half days (from Friday afternoon to Sunday), no civilian was allowed to move from Dalgate to Nishat (a 10km stretch bordering the lake)?” he told The Telegraph. “I think the boats (carrying Modi and his security) were towards the (hotel) Centaur side, where no civilians live anyway.”

He said that even tourists were not allowed shikara rides during these two-and-a-half days.

Kashmir observed a shutdown against his visit.

Modi had recently been accused of waving at an empty train in Assam for the cameras.