As one Manipuri woman put it, 'Everybody talks of women’s empowerment, yet they have not fielded any woman candidate' 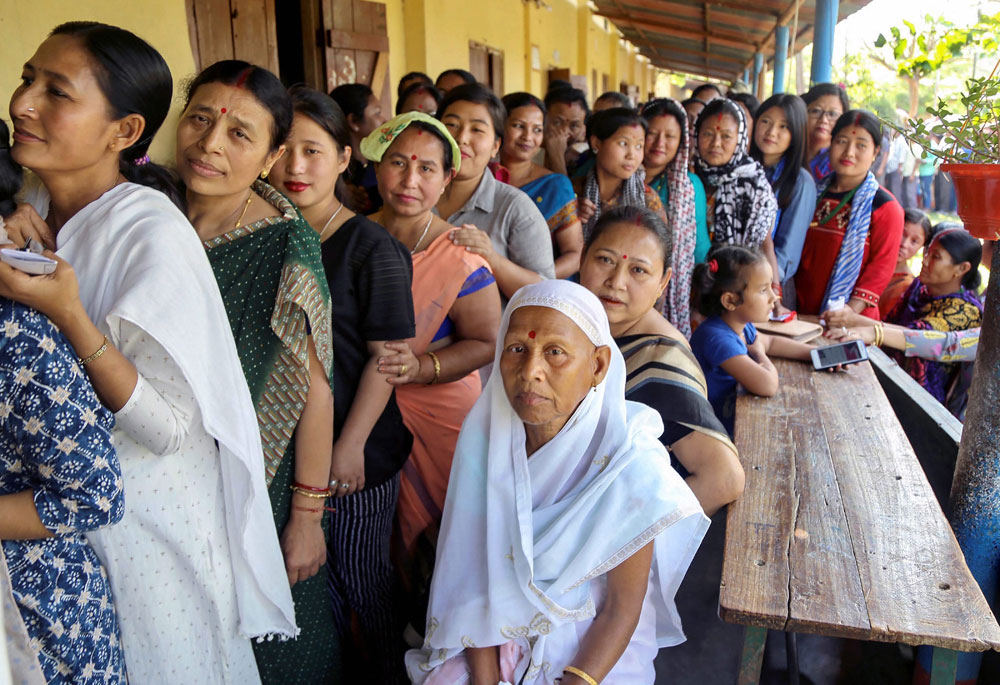 ‘My vote matters’. This is how the Election Commission is exhorting the electorate “in our ageless democracy,” in a poster depicting two tribal women from Sikkim. “The lines on my face do not matter, the ink on my finger does,” it says.

The irony is that the participation of women candidates, especially in the northeastern tribal states, has been negligible. In the 2014 Lok Sabha elections, only two women parliamentarians were elected from the Northeast: Sushmita Dev of the Congress from Silchar and Bijoya Chakraborty of the Bharatiya Janata Party from Guwahati, both non-tribal people from Assam. In Manipur, the capital, Imphal has an Ima Keithel (mothers’ market) run entirely by women. But not a single woman candidate figures in these polls, making the president of Khwairamband Nupi Keithel Semgat Sagat Lup, Radhesana, lament: “Everybody talks of women’s empowerment, yet they have not fielded any woman candidate.” They did have a member of parliament in Kim Gangte way back in 1998, as a Manipur People’s Party candidate. She has been with the Communist Party of India, the MPP, the Trinamul Congress, the BJP and now the National People’s Party, but the party-hopper is not contesting this year. Yet Manipur has 9,90,960 women voters, 51,034 more than the men.

In Meghalaya, the seat of matriliny, women voters outnumber the men by 19,658. It does have a woman candidate in Tura, the bastion of the late Purno Agitok Sangma. But she happens to be his youngest daughter, Agatha, an MP twice over, piggybacking on Sangma’s aura. Lacking her political lineage is an independent candidate in Mizoram, where the 63-year-old Lalthlamuani has created history by being the first woman to contest a parliamentary election. Pitched against five male candidates, she said: “I was told by the Lord to contest the polls... I want to uplift the status of women and to make the Almighty God happy with our nation.” God willing, she will secure more than the 69 votes polled in her favour in last year’s assembly elections! The state has 4,02,408 women voters, outnumbering men by 20,517.

But unlike Lalthlamuani, who does not campaign (vesting her faith in the Lord to reach out to the electorate on her behalf), the campaign spectacle is playing out before the Indian electorate. An eye-catching campaigner in Assam was undoubtedly the independent candidate, Junmoni Devi Khaund, who cantered along the busy streets of Guwahati on horseback to the Kamrup returning officer’s chamber last week to file her nomination for the Lok Sabha poll. Images of Rani Lakshmi Bai of Jhansi, a veteran in horse-riding, martial arts and sword fighting, came to mind as Khaund, astride a brown horse and sporting traditional headgear matching the marigold garland, brandishing a hengdang (traditional sword) of the Ahoms, declared: “I am here to represent the fierceness of our freedom fighter Kanaklata Barua.”

Bucking the trend, Arunachal Pradesh, which witnessed simultaneous assembly and Lok Sabha elections yesterday, had 11 women in the fray for the 60-member assembly, while a greenhorn woman candidate stood for one of its two Lok Sabha seats. In contrast, Nagaland has never elected a woman legislator. The scenario is so pitiable that when a village council in the state recently elected a female chairperson, Tokheli Kikon, there were celebrations to highlight the shattering of a glass ceiling!

Tripura, too, has a face-saver in Pratima Bhowmick (BJP) and Pragya Deb Burman (Congress), to spare the Election Commission any blushes on its women-oriented poster. The BJP manifesto, released on Monday, harped on women too. In an apparent blooper, it said: “We have constituted the Women’s Security Division in the Home Ministry, and have made strict provisions for transferring the laws in order to commit crimes against women.” Should we women, like Lalthlamuani, look to the Almighty for our salvation?

The number of women candidates for elections must go up